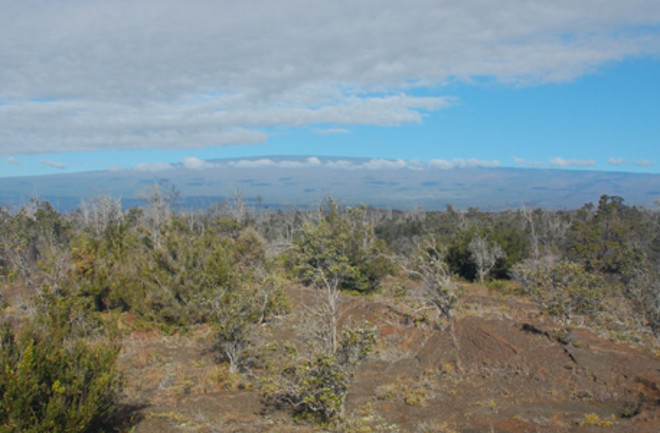 The broad shield of Mauna Loa in Hawaii, the largest active volcano on Earth.

Erik Klemetti, taken March 2013. We just passed the 30th anniversary of the last major eruptive period at Hawaii's biggest volcano, Mauna Loa. Since those eruptions in 1984, the volcano has been quiet, letting the continuous activity at Kilauea take the spotlight. However, by no means is Mauna Loa going to be quiet forever and over the past year, there have been increasing signs that the volcano might be preparing to jump back into action. The Hawaiian Volcano Observatory noted that Mauna Loa has had 4 earthquake swarms over the past ~15 months that suggest that deep below the summit crater, magma is moving. These swarms are in the same location, on the northwestern flank of the Mauna Loa, as earthquakes that preceded the eruptions in 1984 and they are all occurring at depths of 10-14 km, near the base of the oceanic crust under Hawaii. This might mean that magma forming in the hotspot under the islands is slowly pooling at the base of the crust, refilling the reservoir that feeds Mauna Loa. However, as of right now, there is little evidence of deformation or increasing carbon dioxide or sulfur dioxide emissions from Mauna Loa -- all key signs that an eruption might be about to start at a shield volcano like Mauna Loa. HVO also notes that the earthquake activity is much less intense now that it was in the years just prior to the 1984 activity. Remember, lava flows from Mauna Loa are definitely a hazard for people living between the volcano and Hilo and Hawaii has been preparing for the volcano's awakening. Nothing is going on right now, but you can get quite a view from the webcams set up at the Mokuʻāweoweo summit area. While we wait for Mauna Loa to return to action, be sure to check out what Kilauea has been up to over the past few months. There have been a number of lava flow breakouts along with some rapidly changing activity at the two lava lakes on the volcano at Halema'uma'u and Pu'u O'o. Be sure to check out the webcams as well to see what's going on at the world's most active volcano. It might not be long before it is joined by its neighbor.