Earthquake Swarm Near Greenville in California 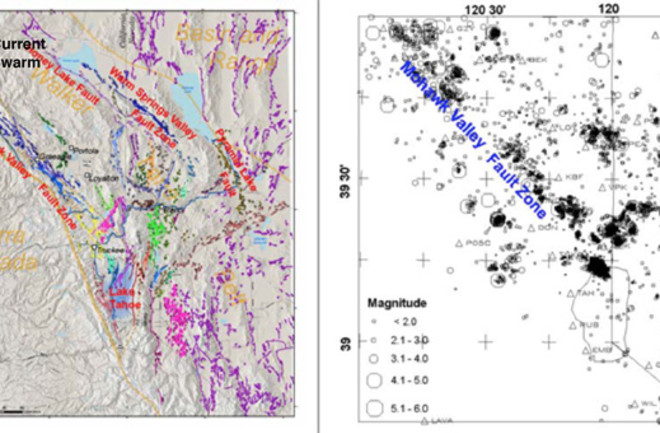 Fault map (left) and seismicity between 1986-2006 (right) for the Mohawk Valley and nearby fault systems in California and Nevada. The current Greenville earthquake swarm is marked with an arrow in the left panel. Image: Modified from Kreemer and Hammond. I've been getting a lot of questions about the current Greenville, California earthquake swarm. This is likely due to the fact that the swarm is in the vicinity of the Lassen Volcanic Center, which is ~50 km to the northwest of these earthquakes. Now, I don't like to delve too much into earthquakes that aren't volcanically-related here, but I thought I'd share some information on the earthquakes just to help with some of these questions. First, these earthquakes have nothing to do with the Lassen Volcanic Center (LVC). They are centered much too far away to have any connection. They might be felt up there in the Park, but there is no reason to think that there is any relationship between earthquakes and the LVC. You can check out the LVC's seismicity on the webicorders for the area -- right now they're picking up a lot of the shaking going on down at Greenville. Second, looking at the technical information on the largest of the earthquakes in the swarm, they look to be mainly strike-slip earthquakes. This means that two pieces of crust are sliding next to each other (like the San Andreas fault system). The depths of the earthquakes are fairly shallow, all within the top 11 km of the crust, many much shallower than 11 km. Third, thanks to a suggestion by Becky Oskin, they look like they might be related to the Mohawk Valley fault system**. I found a research report by the Nevada Bureau of Mines and Geology on the Mohawk Valley system and marked where this swarm is occurring and you can see that one of the faults (in purple; above) does run up to the southern shores of Lake Almanor, the location of the current swarm. You can see from the figure above that shows seismicity in the area between 1986-2006 that it is actually a fairly active fault system, so the earthquakes here should be no surprise -- this swarm was just started by an earthquake of a magnitude larger than many along the Mohawk Valley system. The fault system is dominantly strike-slip, so this swarm also fits in with their style of motion as well. **UPDATE: The earthquakes themselves appear to be park of the Indian Valley fault itself, which is on the northern end of the Mohawk Valley fault zone. Check out this zoomable map of California faults to see the details.