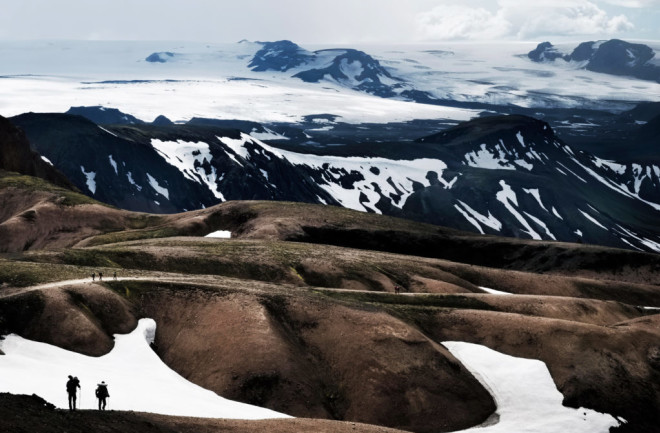 Two hikers approaching the Katla volcano and its glacier.Alamy Earlier this summer, Iceland's Katla caused a bit of a buzz when it had a moderate earthquake swarm. At the time, the Icelandic Meteorological Office chalked it up to typical summer seismicity at the ice-capped volcano and added that no tremor (a sure sign of magma moving under a volcano) was noticed. The volcano settled back down with a little bit of increased outflow from the rivers that drain the caldera---likely caused by some release of hydrothermal fluids or gases---and things went back to normal. Yesterday, Katla decided to up the ante. An ongoing earthquake swarm has been rattling the volcano (see below), some reaching as large as M3, but all at fairly shallow depths within a few kilometers of the surface. The IMO continues to say that there are no particular signs of an eruption happening in the near term (i.e., hours to days) but with the intensity of the seismicity, they have raised the aviation alert status at Katla to Yellow from Green. What this means is the volcano is showing signs of unrest above the background of earthquakes, so it bears close watching while the earthquake swarm continues. No other signs such as deformation of the caldera or increases in hydrothermal gas release have been noticed so far. Even so, Icelandic officials are sending police out to watch the popular tourist destinations around Katla, so if an evacuation is needed, people can be moved quickly.

Earthquakes at Katla in Iceland over September 29-30, showing the new swarm that started the night of September 29, 2016.Icelandic Meteorological Office With the alert status raised, volcanologists and hazard planners across Iceland will be watching the volcano closely to see if it shows signs that could mean an eruption. This could be a sharp increase in harmonic tremor associated with magma movement, it might be inflation of the volcano as magma rises (measured by the GPS stations around the volcano). It might be a change in the strain measurements on instruments around Katla as the edifice shifts due to new magma. It might also be changing water discharge and chemistry from the many rivers that feed from the caldera. All these parameters will be examined if this earthquake swarm continues. However, even with the heightened alert, this is no prediction that an eruption will happen soon. If you are near the volcano when an eruption occurs, here are guidelines of what to do according to Iceland's Department of Civil Protection and Emergency Management. You can monitor the shaking at Katla on some of the IMO tremor instruments: HVO and SNB work well, but a word of warning: These tremor plots are very tricky to interpret, so wait until the IMO announces anything before believing proclamations at the state of the volcano. You can also watch the real-time earthquake data on the IMO website. The best way to watch for an eruption in realtime is to look at the Katla webcam---though even that might be misleading, especially if there is steaming from ice melting within the Mýrdalsjökull ice cap. Be sure to check out the great FutureVolc website on Iceland where you can see the "activity status" of Katla and possible eruption scenarios (based on historical activity). For now, all eyes will be on Katla to see if this unrest continues or increases.