Experiment re-creates how iron-rich microworlds slammed into a young Earth. 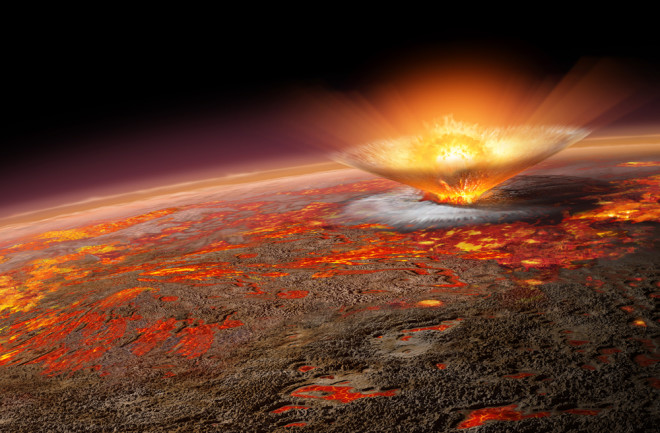 An illustration depicts an asteroid vaporizing as it slams into a young Earth. The vaporization helped distribute iron across the planet. | Don Dixon/cosmographica.com

Early Earth was a violent place. City-size planetesimals — rocky microworlds that clumped together in the solar nebula — smashed into our planet’s surface at incredible velocities and seeped down to Earth’s iron core, depositing yet more iron. But now it appears that iron is instead spattered throughout our world’s mantle.

To figure out how this happened, Harvard University planetary scientists paired with researchers working at Sandia National Laboratories’ Z machine and shot metal projectiles into tiny iron squares at up to 55,000 mph.

Through these impacts, researchers discovered that iron vaporizes much easier than scientists had assumed. Instead of sinking into the core, iron-rich planetesimals vaporized on impact and spread out across the planet. This iron rain explains the element’s distribution.

“We did not expect to find that at all. We were very surprised based on the fact that previous models people used for planet formation suggested a much higher critical shock pressure,” says Richard Kraus, now a scientist at Lawrence Livermore National Laboratory and lead author on the paper published in March in Nature Geoscience.

[This article originally appeared in print as "Blame It on the Iron Rain."]