Albert Einstein’s simple yet powerful equation revolutionized physics by connecting the mass of an object with its energy for the first time. 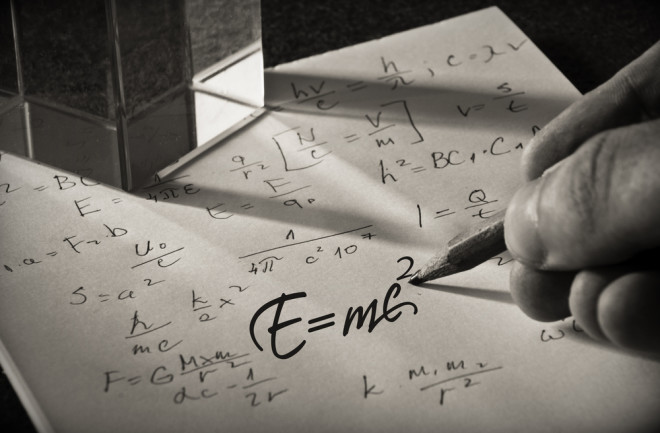 It is perhaps the most famous equation in the world, and also one of the most elegant. Einstein’s legendary equivalence between mass and energy, given the simple formula E=mc^2, is familiar even to schoolchildren.

At times, it simply stands as a placeholder for science — like in cartoons where writing E=mc^2 on a chalkboard signifies there’s some serious physics going on. But the relationship Einstein’s equation alludes to underlies fundamental properties of the universe itself. Mass is energy, energy is mass; the equation builds a bridge between two seemingly disparate domains.

The physics underpinning the equation are appropriately heady and complex. But for the rest of us, the significance of Einstein’s formula boils down largely to one thing: There’s a huge amount of energy bound inside the matter surrounding us. The equation equates the energy of a body in its rest frame, the E on the left-hand side of the formula, to an object’s mass multiplied by the speed of light squared.

A common misconception surrounding Einstein’s formula is that mass can be converted into energy. That’s not actually quite true, nor is it what Einstein meant when he set down his revolutionary idea. Instead, his equation shows that a change in the mass of an object requires a change in its energy. It’s the reason why the end products of nuclear reactions together weigh less than their parent atoms. When protons and neutrons split off from atoms during nuclear fission, they release energy. And as we know from Einstein, that’s equivalent to mass.

It’s easy to see that even tiny amounts of matter represent very large amounts of energy. Humans got a taste of that frightful energy when we invented the atomic bomb. The enormous amount of energy released by the Little Boy nuclear weapon was equivalent to the mass of less than a gram of its radioactive fuel. That’s less than half the weight of a dime.

You don’t need an atomic weapon to turn mass into energy, of course. You extract energy from matter every time you light a candle (though the mechanism there is a chemical reaction, rather than a nuclear one.) But the light and heat that comes from a candle is but a sliver of the energy contained within. A single candle might light up a romantic dinner, but the energy equivalent to all of the mass inside would be sufficient to level an entire city.

Though the energy-mass equation might appear simple, there are some special cases that appear to challenge its assumptions. Take the case of photons, for example. These particles, which represent packets of light, have zero mass, but still contain energy. Taking Einstein’s equation at face value, that appears to be impossible. If mc^2 is zero, then E must be zero as well. But we know that’s not the case.

The paradox is resolved with a slightly expanded, lesser-known version of the equation. This formulation adds in momentum, or p, and also multiplies it by the speed of light. Written out, the equation is: E^2=p^2c^2 + m^2c^4. In the case of a photon, for which m=0, the equation boils down to E=pc. Because photons move at the speed of light regardless of where we view them from, they have momentum, and therefore energy. It’s a result that’s borne out by experiments in particle physics, which return results that are only consistent if the energy-mass-momentum equation holds true for photons.

Setting E equal to mc^2 enabled the most powerful and influential physics of the 20th century. But it was also a kind of logical leap for the field of physics. Prior to Einstein’s work, scientists viewed energy and mass as two entirely separate things. Energy, whether as light, heat or other forms was its own category, and mass, something held by all matter, was another. Though mass and energy could interact with each other, there was never an equivalence between them.

But with two simple strokes of a pen, Einstein set mass equal to energy, metaphorically destroying the wall between the two. Seen in this light, it’s possible to understand that objects with more mass also have more energy, and that adding (or subtracting) mass also changes the amount of energy it represents.

Einstein’s equation prefaced not only the atomic bomb, but to other ways of harnessing nuclear energy as well. Nuclear power plants today utilize the same fundamental scientific principles as nuclear weapons. Small nuclear “batteries” power the Voyager spacecraft — still running after more than four decades — and larger-scale nuclear powerplants could one day provide energy to lunar astronauts. And should humanity ever crack the daunting scientific challenge of sustaining nuclear fusion, we’ll again have Einstein’s work to thank.