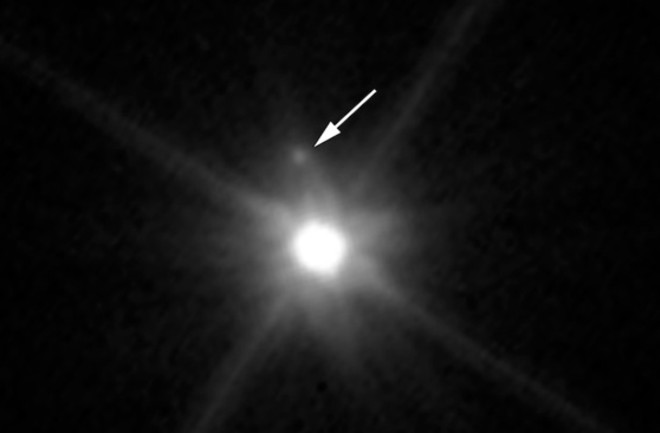 In 2005, Caltech astronomers Mike Brown and Chad Trujillo discovered dwarf planet Makemake, currently believed to be the third largest object in the Kuiper Belt after Pluto and Eris. But at the time, astronomers believed it was alone out there on its long path around the Sun. But new data from the Hubble Space Telescope reveal a moon around the tiny world, and offer a little explanation as to where it was hiding.

“The satellite that we found was not that faint and not that close to Makemake,” says Alex Parker, principal investigator of the research and a planetary scientist at the Southwest Research Institute. “It popped right out of the data when we looked.”

It turns out it was always there. But the newly found object, provisionally called MK 2, orbits Makemake nearly edge-on from our point of view, meaning most of the time it’s obscured by the comparatively bright dwarf planet. Makemake is 886 miles (1,434 km) in diameter, while the new object appears to be only 100 miles (161 Km). Current scenarios also paint it as a dark companion compared to bright Makemake.

The dark surface of MK 2, which in one scenario may reflect as little as 4 percent of light, could explain why astronomers previously showed Makemake to have two highly contrasting albedos (reflectivities) that indicated different materials at work. Those dark spots didn’t seem to line up with the 7.7-hour day on Makemake, though.

“You would expect Makemake’s brightness would go up and down as it rotated, but it’s brightness hardly goes up or down,” Parker says.

There are two possibilities for why a bright dwarf planet has such a dark moon. In one scenario, it’s a captured Kuiper Belt Object that through various circumstances ended up in orbit around Makemake. In the other, a collision formed it, much like the one that formed Pluto’s moon system.

In the latter scenario, Makemake may have a sort of seasonal atmosphere, and as the ices and other chemicals on its surface sublimate, it covers MK 2 in a hydrocarbon film known as tholin. This same process likely creates the red patches on Pluto’s moon Charon’s north pole.

“You might imagine you could paint this moon dark with a transitory Makemake-ian atmosphere,” Parker says.

Follow-up observations will help determine an orbit for MK 2, something that may be hard given its edge-on nature. This would give the researchers a chance to study the size of the moon and help determine a mass for Makemake, especially if they can predict the intervals at which it is visible. In the meantime, Makemake joins a short list of Kuiper Belt Objects known to have moons, including Pluto, Eris, Quaoar, and Haumea.