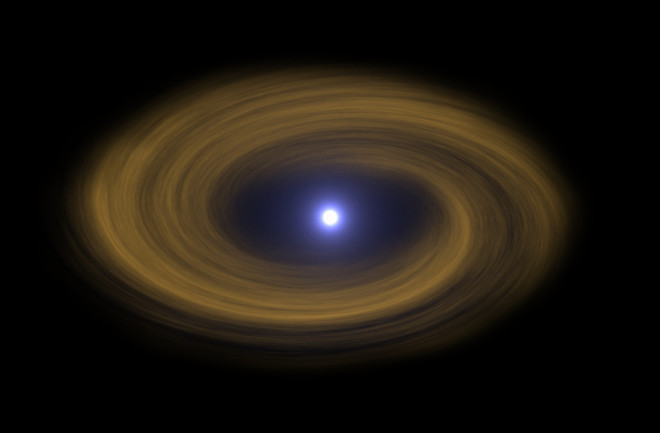 In protoplanetary disks — the gas and dust clouds from which planets are made — the orbits of millimeter-sized dust particles drift inward. If these pebbles don’t accumulate in certain regions of the disk where they can collide and stick together to grow planetesimals, which are kilometer-sized, planet-forming rocks, they will be engulfed by the star.

Until recently, scientists couldn’t prove the existence of such ‘dust traps.’ But telescope observations have detected concentrations of larger dust grains in protoplanetary disks that demonstrate their possibility. One of the most compelling examples: the HL-Tauri star’s disk that has pebbles concentrated in ringlike locations — a feature possibly shared by the disk that formed our own solar system.

In protoplanetary disks, dust grains drift toward regions of higher pressure, typically occupied by the star. But this drift can decelerate or even reverse if the gas pressure in the disk increases locally. “A planet can create a ‘pressure bump’ in the disk, causing dust grains to pile up and form planetesimals,” says Nienke van der Marel, an astrophysicist at Leiden University in the Netherlands.

In 2013, Van der Marel and a team of researchers reported their discovery of the first observational evidence of a dust trap. They detected a concentration of dust grains that had clumped together in a region of a disk that rotates around the star Oph-IRS 48, possibly due to an unseen planet.

Early in our solar system, Jupiter (if it formed early enough) is believed to have created a dust trap and suppressed the inward drift of pebbles. This would have allowed asteroids to form in distinct regions of the disk without much mixing of dust grains, and could explain why various types of meteorites look so different.

There’s also the possibility that dust traps can form in regions of the disk where there are no planets. In a recent Nature Astronomy study, André Izidoro, an astrophysicist at Rice University, and colleagues found that our solar system’s protoplanetary disk may have possessed up to three rings of planetesimals located at regions known as ‘snow lines,’ where compounds sublimate or transform from a solid to gas state.

Compounds sublimate in different regions of space depending on their distance from the sun, which affects temperature. These snow lines could offer an ideal site for planets to form.

Using computer simulations, Izidoro and his team found that planetesimals formed within the rings — one closer to the Sun, outside the region where rocks would have sublimated; another where water sublimates; and a third, farther out where carbon monoxide sublimates.

When icy dust grains that originate farther out in the disk drift inward toward the water-associated snow line, the star’s heat will vaporize the ice. “The sublimation can create a pressure bump, allowing the dust grains to accumulate,” says Izidoro.

In their simulations, the terrestrial planets (Mercury, Venus, Earth and Mars) formed in the inner ring primarily from silicate dust grains. Meanwhile, the gas giants formed in the middle ring. The outermost ring was located beyond the current orbit of Uranus.

These possible rings in our Solar System’s protoplanetary disk would have resulted in very little mixing because relatively few pebbles would have drifted inward across the snow lines. This explains the various compositions of meteorites and the low mass of the four innermost planets, says Izidoro.

Using the Atacama Large Millimeter Array (ALMA) telescope located in Chile, researchers including van der Marel have been able to observe dust traps within protoplanetary disks. “We have seen all kinds of interesting structures including rings, gaps, spiral arms and others,” she says.

The James Webb Space Telescope will also observe more protoplanetary disks, including dust grains located in the inner part of disks where terrestrial planets can form.

Our Solar System’s protoplanetary disk was disconnected, with little material drifting past the water snow line, says Izidoro. There are planetary systems, however, that have very large rocky planets closer to the star, known as ‘Super-Earths,’ indicating that plenty of dust drifted farther within.

One of the burning questions that new observations could help answer: whether the observed disk structures are a precursor or a result of planet formation. Before ALMA, scientists generally agreed that gas giants formed outside the water snow line and rocky planets inside it, says van der Marel. “There is a lot of indication that dust pebbles from the outer disk get trapped at pressure bumps, and whatever ends up in the inner disk depends on where and how many of these dust traps were located further out,” she says.