ALMA captured the aftermath of a scrap between two stars. 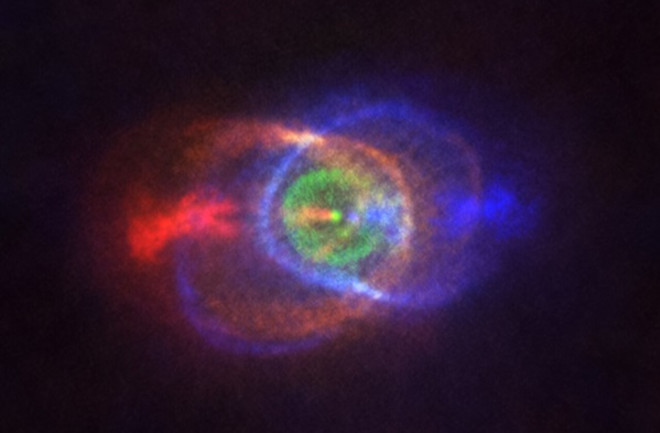 A pair of binary stars that were once engaged in an intense cosmic brawl have left behind a beautiful gas cloud bursting with color, revealing clues about how the fight went down. The battle took place in the HD 101584 system, located thousands of light-years away in the constellation Centaurus, and the aftermath was captured by the 66 radio telescopes that make up the Atacama Large Millimeter/submillimeter Array (ALMA) in Chile.

Fortunately, beauty can come from destruction, and that’s definitely the case with this system.

As the system’s aging star puffed up into a red giant, it grew large enough to engulf its lower-mass companion. The smaller star then spiraled toward the core of its giant neighbor. But instead of colliding with it, the interaction caused the larger star to dramatically shed its outer layers, creating the colorful gas cloud you see above.

“Currently, we can describe the death processes common to many Sun-like stars, but we cannot explain why or exactly how they happen,” said co-author Sofia Ramstedt of Sweden’s Uppsala University in a recent press release.

What we can learn from the life cycles of stars? Discover's sister magazine Astronomy has a free special collection for download: Stars: The galaxy’s building blocks. Our eBook contains everything you need to know about how stars live, die and change their galactic homes over time.

“HD 101584 gives us important clues to solve this puzzle since it is currently in a short transitional phase between better studied evolutionary stages,” Ramstedt said. “With detailed images of the environment of HD 101584 we can make the connection between the giant star it was before, and the stellar remnant it will soon become.”

Today’s telescopes allow astronomers to scour the gas clouds around HD 101584 for clues about the stars within, but the stars themselves are too distant and too near each other to be resolved. At least for now.

When more powerful telescopes are complete, such as the upcoming Extremely Large Telescope, we’ll be able to get a closer look at the heart of this binary, providing even more information about the battle that took place there.

The research was published last year in the journal Astronomy & Astrophysics.