Drip from Tar-Pitch Experiment Seen After Decades of Waiting 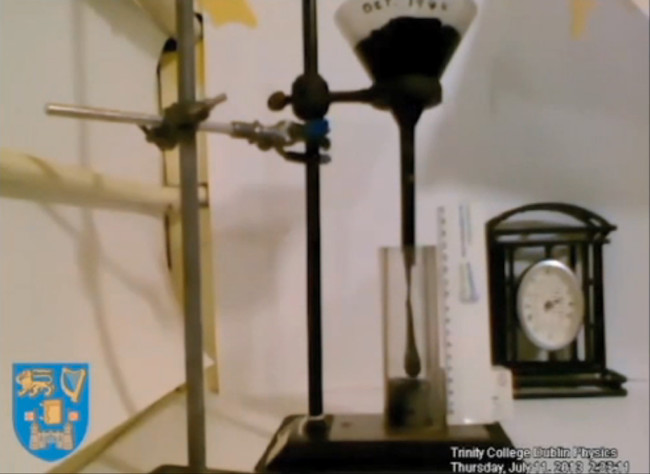 The drip has dropped! (Or has the drop dripped?) Either way, the curse of the 69-year-old pitch-drop experiment has finally been broken: physicists at Trinity College in Dublin have finally caught the falling drop of asphalt on film for the first time ever, without a malfunctioning camera or an ill-timed tea run thwarting their plans. And it's a good thing they have videographic proof this time because it'll be another 7 to 13 before the pitch drips another drop.

The sticky black tar pitch, also known as asphalt, is an über thick liquid that flows reeeeeeeeeally slowly. The Dublin pitch-drop experiment was set up in 1944, and is a riff off an earlier Australian demo

set up in 1927, but very few people have been watching it with rapt attention during those decades. In fact, for a while it was forgotten, collecting dust instead of accolades. But no more! Physicists at Trinity College finally caught the drop on tape on July 11. They estimate the viscosity (resistance to flow) of tar pitch is 2 million times greater than that of honey and 20 billion times the viscosity of water, as reported