Dozens of Galaxies Discovered From the Early Universe 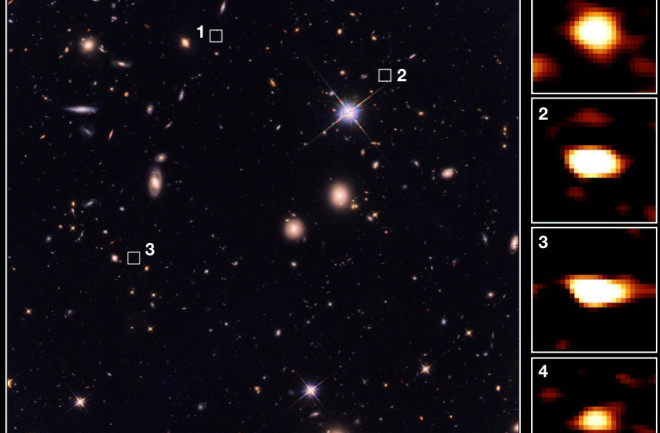 The universe is 13.8 billion years old, but scientists have trouble seeing back to its earliest days. This cosmic dawn has been obscured by time, distance, and the rest of the universe. Part of the problem is that light gets stretched as it travels across the cosmos. The longer the journey, the more stretched out its wavelengths become.

So our earthly telescopes can detect light from hot stars in nearby galaxies in the nearby universe and their light looks more or less as it did leaving the star. But the same type of galaxy, viewed from across the universe, will have its light stretched to long-wavelength radio waves. That means distant objects may appear very different from nearby ones, at least at first glance.

Scientists have found some of these earliest galaxies. But as with any astronomical target, the brighter an object is, the easier it is to find.

The easiest distant galaxies to find are extreme “starburst” galaxies that are forming new stars at high rates. They’re very bright, but scientists doubt they represent the average galaxy.

In an effort to find more typical galaxies, an international group of astronomers led by Tao Wang from the University of Tokyo used the Atacama Large Millimeter/submillimeter Array (ALMA) radio observatory in Chile, as well as other telescopes. They turned up 39 such objects that they think represent what most early galaxies were actually like. These galaxies made stars at a slower but steadier pace, and probably went on to become the largest galaxies in the modern universe.

Wang and colleagues hope these galaxies can explain both how today’s galaxies began, but also how so many of them came to exist so early in the universe, contrary to most current theories.

The team published their findings August 7 in the journal Nature.

The Past Informs the Present

“It was tough to convince our peers these galaxies were as old as we suspected them to be,” said Wang, the paper’s lead author, in a press release. “Our initial suspicions about their existence came from the Spitzer Space Telescope’s infrared data. But ALMA has sharp eyes and revealed details at submillimeter wavelengths, the best wavelength to peer through dust present in the early universe. Even so, it took further data from the imaginatively named Very Large Telescope in Chile to really prove we were seeing ancient massive galaxies where none had been seen before.”

The reason these galaxies were hidden from sight is that, while they were actively making stars, they also contained plenty of dust, which tends to block and obscure much of a galaxy’s light. This makes them disappear at certain wavelengths, or colors of light, and also makes them dimmer and harder to spot overall.

With the new collection of targets, Wang and his team hope to better understand how galaxies grew and evolved from the universe’s first collections of stars, in the first 2 billion years or so of existence, until today.

So far, they’re offering surprises. The number of new galaxies found goes against many models of the early universe. It’s difficult to explain how so many massive galaxies grew so early in the universe’s history. The authors warn that current our understanding of how large galaxies form “may require substantial revision.”

But the the team also points out that it’s difficult to understand the details of how these galaxies were making stars and producing energy. Because these galaxies are so faint and appear mostly at radio wavelengths, scientists can’t use detailed spectroscopy, which splits light apart into its many colors and reveals a more precise view. The researchers hope that upcoming missions like the James Webb Space Telescope can set its infrared gaze on these galaxies and reveal more of their ancient secrets.