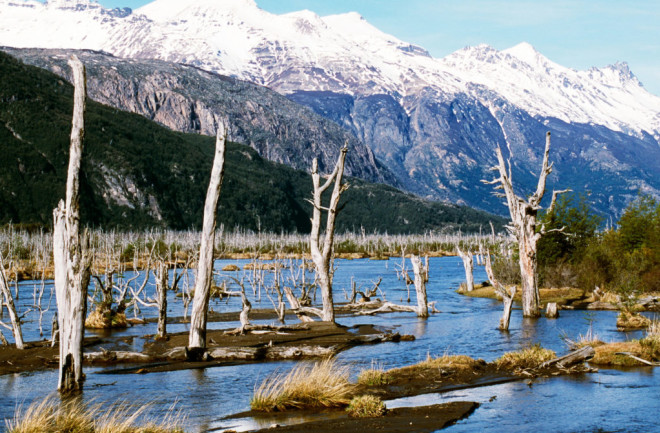 Dead trees in the River Ibanez valley killed by ash from the Cerro Hudson eruption in 2011.John Warburton-Lee/Getty Images Last night, the ONEMI (Oficina Nacional de Emergencias) and SERNGEOMIN (Chilean Geological Survey) in Chile raised the alert status for the area around Cerro Hudson in the southern Andes. Normally, raising the alert status like this is due to an acute change, when the behavior of the volcano shifts suddenly. However, this time, the elevation to Yellow alert status at Cerro Hudson is due to accumulated events over the past month. Dozens of small earthquakes have occurred since the start of November, none stronger than M3.2. But their location (in geographic space and depth) are similar to those before the last eruption of Hudson in 2011. The number of earthquakes hasn't increased much above the baseline activity at an active volcano like Hudson, but energy released by the largest earthquakes has been increasing over the past few months. Combine that with the fact that the earthquakes have the character of those associated with magma movement, and the SERNAGEOMIN and ONEMI decided to treat Hudson with an abundance of caution, setting up a 3.5 kilometer exclusion zone around the volcano. Hudson is a fairly unknown volcano to most people, but it did produce one of the largest eruptions in the latter half of the 20th century. The 1991 eruption was a VEI 5 event, which is on the same scale as Mount St. Helens in 1980 (and a bit smaller than the much more famous eruption of Pinatubo that had happened earlier that year). Even the 2011 eruption, which was VEI 2, opened three new vents on the volcano and covered the ice-filled summit caldera with dark grey ash. So, any unrest like this at Hudson bears close watching. In other volcano news: Mexico's Popocatépetl had some of its strongest explosions of the year---large enough to force the closure of airports around Mexico City. The explosive plumes reached ~5 kilometers (~15,000 feet) and spread ash on the region. It was the removal of the ash from the runways that caused the Puebla Airport to close. You can watch all the rumblings and explosions at Popocatépetl on the webcam pointed at the volcano.