The slight differences between the hemispheres may soup up the brain's processing power. 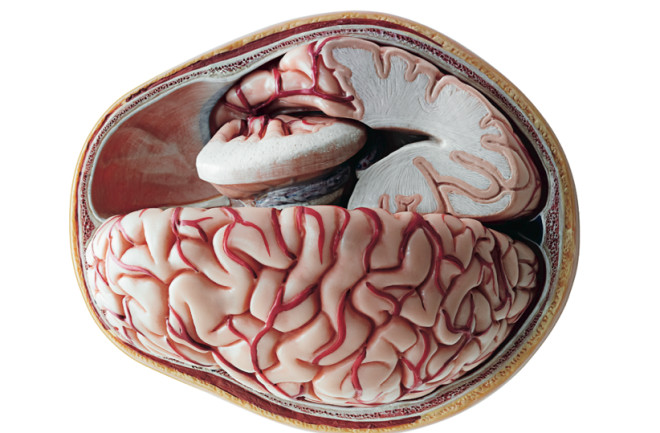 There is nothing more humbling or more perception-changing than holding a human brain in your hands. I discovered this recently at a brain-cutting lesson given by Jean Paul Vonsattel, a neuropathologist at Columbia University. These lessons take place every month in a cold, windowless room deep within the university’s College of Physicians and Surgeons. On the day I visited, there were half a dozen brains sitting on a table. Vonsattel began by passing them around so the medical students could take a closer look. When a brain came my way, I cradled it and found myself puzzling over its mirror symmetry. It was as if someone had glued two smaller brains together to make a bigger one.

Vonsattel then showed us just how weak that glue is. He took back one of the brains and used a knife to divide the hemispheres. He sliced quickly through the corpus callosum, the f lat bundle of nerve fibers that connects the halves. The hemispheres flopped away from each other, two identical slabs of fleshy neurons.

Sometimes surgeons must make an even more extreme kind of slice in the brain of a patient. A child may suffer from epilepsy so severe that the only relief doctors can offer is to open up the skull and cut out the entire hemisphere in which the seizures start. After the surgery, the space soon fills with cerebrospinal fluid. It may take a child a year of physical therapy to recover from losing a hemisphere—but the fact that patients recover at all is stunning when you consider that they have only half a brain. It makes you wonder what good two hemispheres are in the first place.

In fact, scientists have spent a lot of time pondering this very question. Their best answer has a lot to do with the form and evolutionary history of our bodies. From early in our development as embryos, humans take on a left-right symmetry that eventually gives rise to our two eyes, our two big toes, and every paired structure in between. All vertebrates are symmetrical in the same way, as are butterflies, scorpions, and a vast number of other invertebrates. This left-right structure is probably inherited from the common ancestor of all bilaterally symmetrical animals, a creature that apparently emerged more than 570 million years ago.

There were some obvious survival benefits from left-right symmetry. With muscles and limbs on both sides of their bodies, animals could move forward quickly and efficiently. Once established, symmetry had a powerful effect on how new organs evolved. Eyes and antennae tended to develop in left-right pairs, for example. When early fish began to evolve complex brains, those too developed according to left-right rules. The human brain is very different from the brain of a lamprey, but in both species the neocortex—the outer layers of the brain—is divided into two mirror-image hemispheres.

Of course, our bodies are not perfectly symmetrical (heart on the left, appendix on the right), and neither are our brains. Some regions are slightly bigger on one side than on the other, and these differences translate into imbalances in how the human brain works. Most people, for example, tend to favor their right hand over their left. In the mid-1800s, the French physician Paul Broca discovered a region on the left side of the brain that is essential for language; damage to Broca’s area, as it is called, leaves people unable to talk. The same region on the right side is not so vital. Another area, on the underside of the brain, is important for recognizing people’s faces. The right half of this region, known as the facial fusiform area, does most of the work of recognizing. In fact, if people view a face only through their left eye (which is linked to the brain’s right hemisphere), they will do a better job of recognizing it than if they use only their right eye.

These sorts of findings helped turn the hemispheres into pop phenoms. People were tagged as “right brains” if they could draw and “left brains” if they were analytical. Academics made big claims about the hemispheres as well. In the 1990s cognitive scientist Michael Corballis of the University of Auckland in New Zealand argued that the asymmetry of the brain—known as lateralization—was a key step in the evolution of our species, giving us language and additional mental powers that other animals lack.

Today Corballis recognizes that it’s not so simple. Lateralized brains are not unique to humans. Parrots prefer picking up things with their left foot. Toads tend to attack other toads from the right but go after prey from the left. Zebra fish are likely to look at new things with their right eye and familiar things with their left. Even invertebrates are biased. While studying vision at the Australian National University, Pinar Letzkus rewarded bees with sugar whenever they extended their tongue at the sight of a yellow rectangle on a computer screen. She then fashioned tiny eye patches and put them on a new set of subjects. Bees with their left eye covered learned almost as quickly as did bees without a patch. But bees with their right eye covered did far worse.

The broken symmetry of the nervous system may thus be as old as the symmetry itself. If so, it is an ancient puzzle. Being biased to one side would seem like a serious handicap: A toad that hopped to the left whenever it was startled by a predator, for instance, would be easy prey for an attacker that could anticipate which way it would go; the same holds for any other kind of ingrained behavioral imbalance. A number of scientists have run experiments to find the benefits that might offset such costs.

One hypothesis is that a lateralized brain is more powerful than one that works like a mirror image. Instead of two matching parts of the brain performing an identical task, one can take charge, leaving the other free to do something else. Lesley Rogers, a biologist at the University of New England in Australia, tested this hypothesis on chickens. The birds use their left hemisphere to peck for seeds and their right hemisphere to detect predators. Some chickens have more lateralized brains than others, and there is a simple way to make any chicken more lateralized: Just shine a light on it while it is still in the egg. Chick embryos usually develop with the left eye tucked inward and the right eye facing out. The stimulation of light on the right eye alters the developing left-brain hemisphere but not the right.

Rogers and her colleagues reared 27 chicks that had been exposed to light and 24 that had not. Each day the researchers put the chicks in a special box with grain and pebbles scattered on the floor; at the same time, they distracted the birds by moving a hawk-shaped cutout overhead. They then observed how well the chicks were able to distinguish between pebbles and grain. Light-exposed chicks learned to do a much better job. Rogers concludes that lateralized brains allowed the chicks to multitask more effectively, with each eye handling a separate job. There is evidence for the same phenomenon in fish.

David Stark of New York-Presbyterian Hospital recently found additional clues about lateralization in his studies of 112 different regions in the brains of volunteers. He and his collaborators discovered that the front portions of the brain are generally less tightly synchronized across the hemispheres than are the ones in the back. It may be no coincidence that the highly synchronized back regions handle basic functions like seeing. To observe the world, it helps to have unified vision. At the front of the hemispheres, in contrast, we weave together streams of thought to produce complex, long-term plans for the future. It makes sense that these areas of the brain would be more free to drift apart from their mirror-image partners.

No matter how lateralized the brain can get, though, the two sides still work together. The pop psychology notion of a left brain and a right brain doesn’t capture their intimate working relationship. The left hemisphere specializes in picking out the sounds that form words and working out the syntax of the words, for example, but it does not have a monopoly on language processing. The right hemisphere is actually more sensitive to the emotional features of language, tuning in to the slow rhythms of speech that carry intonation and stress.

Neuroscientists know that the hemispheres work together and that they do so by communicating through the corpus callosum. But exactly how the hemispheres cooperate is not so clear. Perhaps paired regions take turns being dominant. That is known to happen in some animals. For instance, dolphins use this strategy to sleep and swim at the same time: One hemisphere remains active for hours, then fades while the other takes over. Bird brains switch as well. In order to sing, a songbird makes the two sides of its lungs open and close. The two hemispheres of the bird’s brain take turns controlling the song, each dominating for a hundredth of a second.

The intimate cooperation between the two hemispheres makes it all the more remarkable that a person can survive with just one—a sign that the brain is far more malleable than we once thought. After a hemisphere is forced to manage on its own, it can rewire itself to handle all the tasks of a full brain. In fact, two hemispheres can cause more trouble than one if they cannot talk clearly to each other. Neuroscientists have linked some mental disorders, including dyslexia and Alzheimer’s, with a breakdown in left-right communication.

The two sides of the brain may be a legacy that we inherited from our wormlike ancestors. But their delicate balance of symmetry and specialization is now woven into the very essence of human nature.