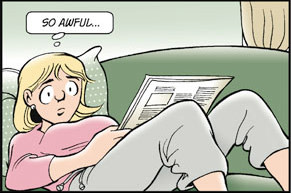 The long-running comic strip Doonesbury does a lot of political humor of course, so it was no surprise he went after J. McCarthy today. After all, McCarthy used an environment of fear to terrify people into behaving contrary to their own best interests, ramping up an imaginary problem into a national concern, and putting thousands upon thousands of lives at risk of being destroyed. No no no. Not Joseph. Jenny.

Tip o' the syringe to the eight gazillion people who sent me that link, including my brother Sid.