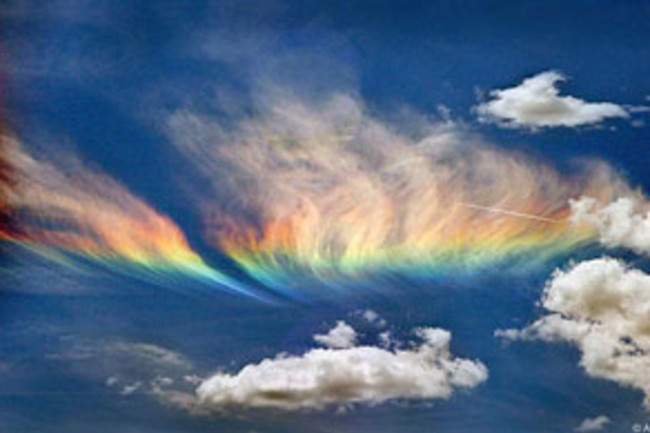 My friend Deric Hughes tipped me off to a new urban legend spreading around: rainbow clouds appearing in the sky shortly before earthquakes. Lots of folks are buzzing over this on Twitter, for example. I'll cut to the chase: these clouds are not physically related to earthquakes in any way. But how I know this will take a wee bit of explanation. First, what's a rainbow cloud? As you can see in the picture, it's a cloud with the colors of the rainbow splashed across it. Sometimes these are called fire clouds, if the shape of the cloud resembles a fire (like in the picture above). Second, what causes this effect? It's pretty simple, actually. Ice crystals in the cloud act as little prisms, breaking up the sunlight into its component colors and spreading them out. It's essentially the same thing that causes "real" rainbows, except with ice and not water droplets. The angle between the Sun, the cloud, and you is important as well, but the essential ingredients needed for this effect are icy clouds and sunlight. That's it. 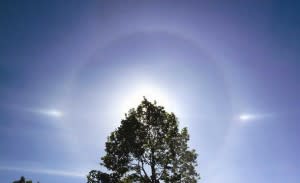 Clouds with ice crystals happen all the time, and these rainbow effects (like sundogs, halos, and many others) are really common. In fact, for me it's rare not to see something like this at least once a week, and more often in the winter. Even in the summer, high clouds can create these pretty events. So what does this have to do with earthquakes? Here's a hint: nothing. What's going on here is that people are seeing these clouds, and then within a day or two experience an earthquake. This links the two things in people's minds. This isn't surprising, since there's a strong human tendency to link events together even if they're unrelated; if one thing happens after another then we tend to think it was caused by (or is at least related to) that earlier event. But this is a logical fallacy, which even has a wonderful Latin name: post hoc, ergo propter hoc, which means after this, therefore because of this. Sometimes two events which happen close together in time are related, but most of the time they aren't. The hard part is telling the difference. In the case of these clouds, I can be nearly 100% certain they are unrelated to earthquakes. Why? Because these clouds are super common, so you could tie them to anything. I saw a rainbow cloud, and then stepped in dog poop! I saw a rainbow cloud, and then found a dollar in the street! I saw a rainbow cloud, and then there was an earthquake! 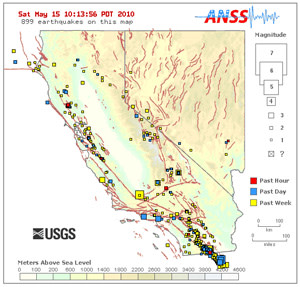 And remember, earthquakes are common as well. Even big ones happen all the time; magnitude 6 or greater earthquakes happen three times a week on average somewhere in the world. And, of course, small earthquakes are even more common; in just the United States alone there are more than 50 noticeable earthquakes every single day! That ups the odds considerably. That's why urban legends like this one persist; someone gets this idea, and it's quickly "confirmed" because someone sees a cloud and feels an earthquake. But they're totally unrelated. It's a natural and understandable tendency, but like an optical illusion you have to understand it's your brain playing tricks on you. Misconceptions like this never die; I know this for a fact because I wrote about this very topic almost exactly two years ago, in fact. As I said in that article:

I see things like this all the time, because I do something a lot of folks don’t do: I look up. Seriously, it’s that simple. When you do that, you get to see halos, sundogs, and arcs quite often. It’s usually in the winter, but it doesn’t have to be. You just need high, icy clouds.

In most cases, I think the antidote for legends like this one is simply paying attention. Don't just go along for the ride! Look up! Look around! The world really is actually a really cool place, and it does pretty well without us needing to add any artificial connections to it.