Do More Meteorites Fall on Antarctica?

Researchers recover more meteorites from Antarctica, but that doesn't mean more land there. 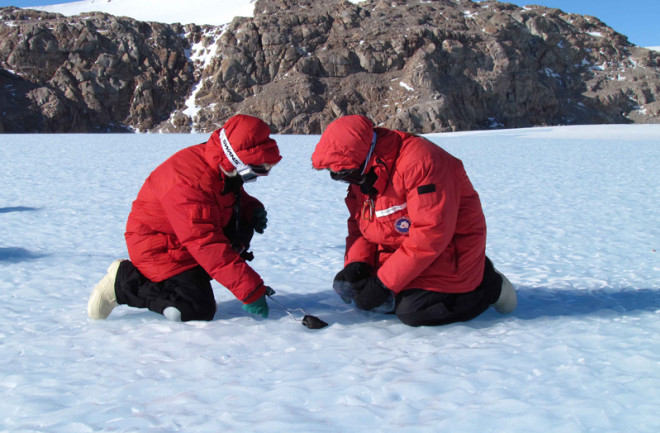 Q: I’ve heard that more meteorites fall on Antarctica than any other continent. Is that true? And if so, why?

A: Researchers recover more meteorites from Antarctica than anywhere else, but it’s not because more fall there. Meteorites land everywhere with almost equal probability — it’s the Antarctic conditions that make the difference.

Many meteorites contain high levels of metallic iron, so if one falls in a humid jungle climate, the combination of moisture and oxygen will corrode it. In Antarctica, a dry desert, the likelihood of corrosion drops significantly, meaning more rocks and more pristine samples.

Meteorites are also easier to locate in Antarctica partly because of the contrast between dark rocks and white ice sheet, says Ralph Harvey, principal investigator of the U.S.-led Antarctic Search for Meteorites (ANSMET) program. And since few rocks naturally form on the ice sheets, the majority of Antarctic rocks collected are extraterrestrial. Even when researchers hunt near the region’s mountains, which contain lots of terrestrial rocks, meteorites’ descent from space rounds their jagged corners and gives them a distinct, burnt outer coating, making them easier to spot.

The biggest reason, though, is ice flow. Sometimes mountains or other obstructions below the ice clog the East Antarctic ice sheet’s path to the sea. If the sheet stays in one spot long enough, strong winds and sunlight can evaporate the top layers and reveal deeper, older ice — and large meteorite concentrations. ANSMET teams working near the Transantarctic Mountains have found more than 20,000 samples since 1976, most from unknown origins.