DIYBio and Open Science Changed My Life (And Could Change Yours) 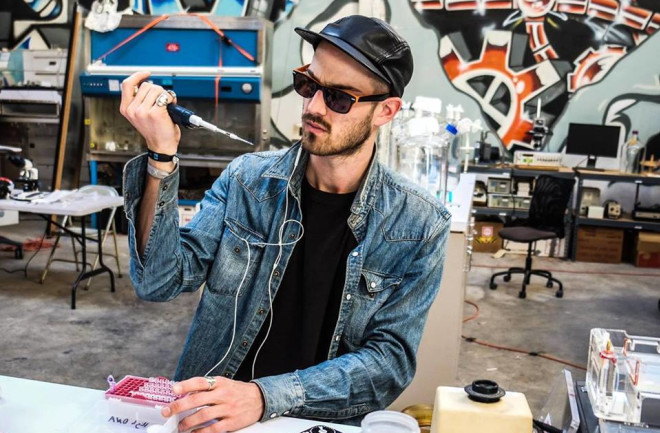 I have two families. There’s the one with two parents and two sisters, with whom I share DNA and have Thanksgiving dinner. And then there’s the one with several dozen science fanatics, with whom I design DNA and craft vegan cheese to one day accompany that turkey. I would like to share my experience with the latter of these beloved families, Counter Culture Labs. Located within Oakland’s Omni Commons, Counter Culture Labs (CCL) is both a physical space and a community. CCL is a self-supervised playground for science enthusiasts of all ages and abilities, a breeding ground for curiosity, and a proud part of the burgeoning global DIY Biology community.A Moment About Me I’m a young, curious guy. A couple years ago I graduated with a bachelor’s degree in computer science. I realized in my latter years as an undergrad that genetics is a fascinating topic, but at that time in my career as a student it was far too late to radically change direction. I grabbed my diploma and skipped gleefully away from academia.

Milo Toor working with fellow citizen scientists. Source Counter Culture Labs. But genetics didn’t leave my mind. The thought of going back to school for a degree in molecular genetics was tempting but daunting. Instead, I was lucky enough to find work at a bioinformatics startup in Oakland, where I have continued to learn about the state of genetics today. Still, there is a big difference between learning and doing. It was a full year and a half after graduation that I learned about the DIY Biology scene, but when I did, I was in for a ride. Counter Culture Labs I learned of Counter Culture Labs through Meetup.com. They were hosting an interactive lecture on bioluminescence. Located in Oakland’s Temescal district, just two miles from my work, I couldn’t say no. What I saw astounded me. It wasn’t merely the glowing algae they had been culturing—the entirety of the space was jaw-dropping. Here, in a community space open to the public, were microscopes, pipettes, centrifuges, a PCR machine, an industrial freezer, an enormous tesla coil, and a few dozen exuberant people delighted to show me around and teach me. Without intending it, I had struck a gold mine. Soon I learned of the Real Vegan Cheese project. The team was attempting to engineer yeast to produce proteins involved in cheese making. Typically cows or goats provide these proteins in their milk; the goal of the project was to remove the animal from the equation by instead having a fungus make the proteins. The end result (ideally): cheese created without animal involvement, a vegan foodie’s dream. I was intrigued, and began to attend meetings. Despite having minimal experience in the field, I was wholeheartedly welcomed by the team. I was invited to participate in experiments. My every question—and there were many—was patiently answered. All that was asked of me was my interest.

Members have access to lab space and technical equipment. Source Counter Culture Labs. Over the next several weeks, I met the rotating cast of CCL’s volunteer members. Alan, a mycology hobbyist, showed me his collection of mushroom samples—some he collected, some sent to him by fellow fungi fans from around the country—and how he extracts their DNA, sequences them, and uses their genetic data and online databases to identify them. Rebecca, a Stanford PhD student working on her dissertation in speculative science fiction, helps me orient myself in the imaginative yet soon-to-be-real world in which biology is an exploitable medium. And Patrik, computational biologist at the Lawrence Livermore National Laboratory and spiritual leader of CCL, has educated me on innumerable topics including microbial gene networks, protein expression assays, synthetic biology programming languages, and molecular chemistry. If you have no idea what any of that means, don’t be intimidated. Neither did I. Before long I became a member at CCL. Paying a small monthly fee for the boundless scientific intrigue that the organization encourages seemed a fair trade to me. I am still attending the Real Vegan Cheese meetings, and am now embarking on an entirely new venture: CCL’s 2015 iGEM project to biosynthesize UV protective compounds. Counter Culture Labs Has Changed My Life Seriously. That’s not hyperbole. With minimal monetary investment and using only my spare time, I have gone from total layman to an active participant in the biosynthesis revolution. That’s a testament to the power of open educational opportunities. I truly can’t overstate the degree to which Counter Culture Labs has facilitated my ability to practice science and learn about genetic engineering. The experience I have gained at CCL has convinced me that a career in bioengineering is not beyond my reach. CCL has opened doors I thought were long since closed, and some I never knew existed. And the thing is, there’s nothing special about me. I wanted to learn about genetics. That’s it. I had no special connections, I didn’t have to polish my CV and apply, I didn’t have to pawn my car to pay for membership. I just had to show up, to be curious and want to learn. Undoubtedly my story is not unique. Dozens of people frequent CCL’s premises on a weekly basis, and what unites us is not a deep understanding of science, but a compelling curiosity. As an old adage goes: “Tell me and I forget. Teach me and I remember. Involve me and I learn.” And at CCL, learning is the raison d’être. Please, come and behold.

This is a guest post by Milo Toor, a software engineer and apprentice biohacker working in Oakland, CA. His aspirations include climbing V5's, gobbling Saturday NYT crossword puzzles, and becoming a full-time bioengineer so he can help change life as we know it.