An Englishman with Crohn's disease is infected with parasites. That’s the good news. 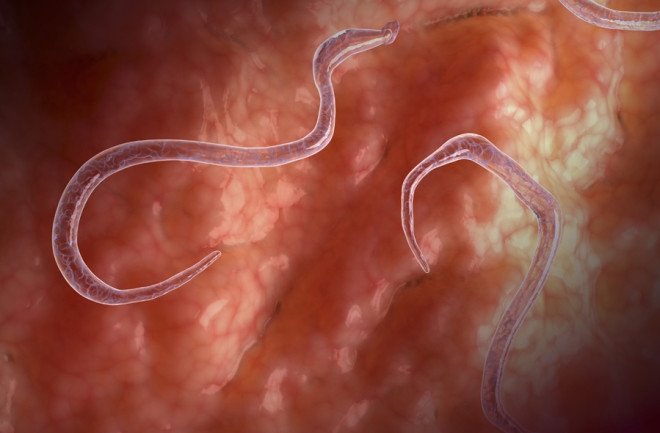 Hookworms, at home in the small intestine. Do-it-yourself worm therapy as a way to treat autoimmune disorders has become more common in the past decade. Science Picture Co./Science Source

In 2007, John Scott, who had extreme food and environmental allergies, chronic fatigue and Crohn’s disease, participated in a Nottingham University study to test the safety of hookworms (Necator americanus) on Crohn’s patients. It was a placebo-controlled study, but Scott assumed he received worms because his condition improved. So when the study ended, he wanted the worms back.

Scott’s idea to infect himself with roughly centimeter-long worms was not an outlandish plan: Do-it-yourself worm therapy as a way to treat autoimmune disorders has become more common in the past decade. Since humans evolved with parasites and bacteria, some scientists believe the immune system works in tandem with these creatures to keep us healthy. Hookworms have had millennia to develop “exquisite strategies” to suppress their host’s inflammation, doing as little harm as possible so they can reproduce and infect the next host, says James Cook University biologist Alex Loukas, who is working to develop drugs based on hookworm secretions.

A close-up view of a hookworm. Alex Loukas/James Cook University

But Scott didn’t want to wait for a worm pill. It’s illegal to ship the worms to the U.S., but Scott lives in the U.K., and he was able to order 35 live hookworm larvae through a private company. He put the larvae on his arm under a bandage and “got a very bad itch and a rash,” as they burrowed in. Then he waited.

Although his symptoms improved, he also experienced what some DIY worm therapy devotees describe as “worm flu.” In Scott’s case, this meant bouts of diarrhea not associated with his Crohn’s disease. The side effects subsided after a few months, however.

The upside: Scott was eventually able to tolerate foods he hadn’t eaten since he was a teenager. He saw other health improvements as well, and he maintains his body’s worm population to this day by ordering a fresh supply every three months.

Worm therapy fans often experience a rash after infecting themselves with the parasites. John Scott

The worms’ excretions increase the host’s number of regulatory T cells, “the peacekeepers of the immune system” that keep inflammation in check, Loukas says.

But that may not be the only way the worms work. A recent paper in the experimental biology publication The FASEB Journaldescribes how peptides found in hookworms inhibit the proliferation of effector memory T cells, which, unlike regulatory T cells, can actually trigger inflammation.

The bottom line is that scientists haven’t dug up all the hookworm’s secrets — yet. “I’m viewing the worms more as a veritable pharmacopoeia,” says Loukas.

[This article originally appeared in print as "Take 20 Worms and Call Me in Six Months."]