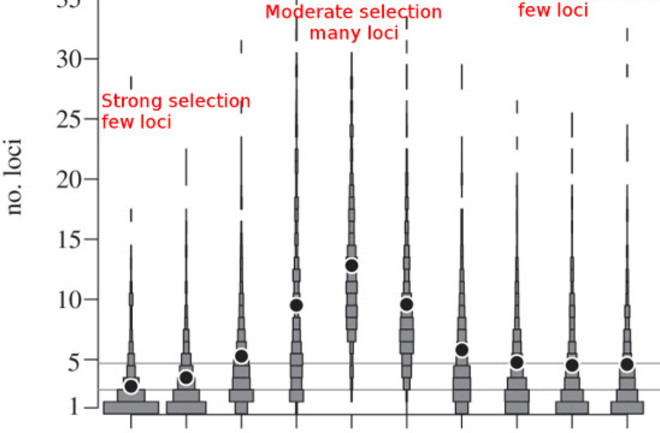 One of the things that people like to do when thinking about evolutionary processes is to consider future predictions of a model. The problem with this is that evolutionary trajectories are not defined just by linear transitions driven by powerful positive selection. There are long term balancing forces which result in modulated equilibria. In some cases the power of selection to reshape the genome under the impetus of a new adaptation is clear and evident. Lactase persistence and malaria come to mind. But in other domains the outcomes are not so clear. For example, human intuition may tell us that higher intelligence, or in the case of men greater height, are beneficial. But the reality is that these are heritable traits which exhibit a great deal of genetic variation. The latest research also suggests that variation on these traits are controlled by innumerable genes, rather than a few of large effect. Going back to what I learned in Principles of Population Genetics, my initial impulse is to assume that continuous quantitative traits which are highly heritable are not subject to strong positive selection. But sometimes textbook wisdom needs to be updated.

I initially saw Etienne Rajon's paper The evolution of genetic architectures underlying quantitative traits on Haldane's Sieve, and now it has officially be published. It is on arXiv, so I suggest you read it yourself if you are interested. But the main result is the one illustrated by the figure above: it turns out that the variation of traits subject to strong and weak selection are controlled by only a few loci, while moderate selection results in the classic Fisherian genetic architecture. The strong selection case is rather straightforward. If selection is strong variation is going to be constrained and eliminated as the trait shifts toward the adaptive peak. The weak selection case seems to be one where loss of function mutations overwhelm the ability of the purifying process, so that only a few loci with alleles which control variation remain standing. The moderate selection scenario is one where selection and deleterious mutations are more in balance, and there is enough time for compensatory loci to emerge to mask the effects of suboptimal variants.

The results here are of notice because it implies that many quantitative traits which one might have assumed to be trivial in an evolutionary sense may be targets of moderate selection. But I am less than convinced of the empirical examples for weak selection and simple genetic architectures within the paper. For example, PTC taste seems to easily have a strong adaptive rationale, because taste is likely a target for selection as it filters our ingestion of poisons. But exploring this topic is important, because genomics is going to result in our ability to explore extremely complex traits and genetic architectures.