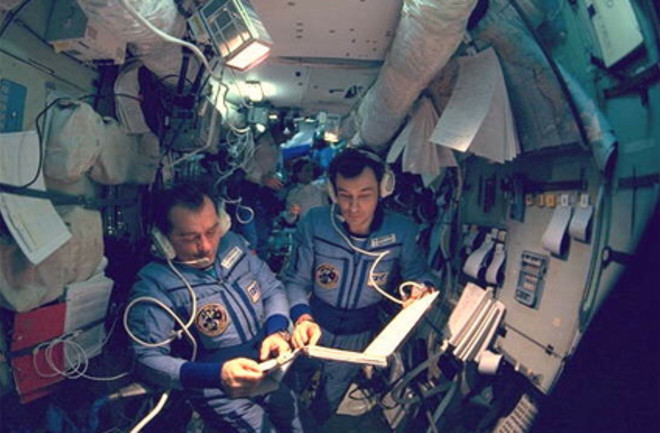 Some of the characters on Battlestar Galactica have been tooling around on a sewage recycling ship recently. Not surprisingly, the onboard accommodations are less than four star. Still, however the characters might feel about it, whenever I’m watching a show with scenes set on a spaceship, the messier the interior looks, the happier I am. Unless a spotlessly clean spaceship is being used for specific plot point (“A key member of the crew offends the obsessive-compulsive plant people of Nebulan Six by failing to use a coaster when ritually offered a glass of ice-cool Krotj”) the problem is that spic and span spaceship interiors break down my suspension of disbelief just as quickly as watching a cardboard background tremble at the approach of a castmember. In the sealed confines of a real spaceship storage space is at a premium and garbage collection rare. Stuff ends up getting stashed everywhere, which is why the junk-filled cargo bays and genteel dilapidation depicted in the short-lived series Firefly strikes a chord in a way that the gleaming surfaces of many other shows don’t. But TV and movie production designers who create immaculate sets shouldn’t feel too bad: the fact that spacecraft can get really messy is a lesson that even NASA took decades to learn. As space writer (and DISCOVER contributorJames Oberg pointed out in his 1986 book Pioneering Space, for a long time, during the planning of what would become the International Space Station, there was a marked disconnect between NASA’s official artist’s impressions of space station interiors, and what a space station actually looks like after being inhabited for any length of time. Today, keeping track of all the stuff onboard a space station is more than just busywork for idle spacefarers. It’s become a critical operational issue. The severity of the problem became evident during the lifetime of Russia’s Mir space station, which stayed aloft for 15 years before being deorbited in 2001. Toward the end, with Mir almost bursting at the seams, orbiting cosmonauts were forced to hold up mysterious bits of equipment that they had found onboard in front of mission control’s camera so that engineers on the ground could work out if the items were important or not. Some pieces of hardware were never identified. As a result, NASA developed a computerized database for the International Space Station. Continually maintained by the astronauts, it uses bar codes to identify equipment. This especially comes in handy when ground staff are putting together the manifest for resupply missions, avoiding the space equivalent of returning home from the store with a pint of milk, only to find two cartons already in the fridge. As for interplanetary missions, how to handle garbage generated en route is not yet clear, with one group of Russian researchers suggesting that bacteria could digest soiled underwear to generate methane that could be used produce electricity, or even used as rocket fuel. What might happen to the waste produced on, say, the surface of Mars by a human mission is also of concern. Currently, according to international planetary protection rules, there are strict rules about many microbes you can bring along when you are exploring the solar system, so as to avoid contaminating environments. Robot probes can be sterilized, people can not, so how to prevent bacteria from escaping in the environment is already beingstudied.