Because the system is 6 million years young, the kids haven't been weaned yet. 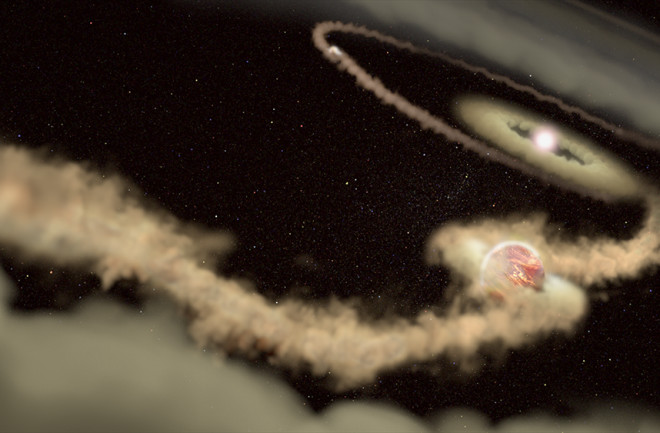 The young star system includes two gas giants, shown here in an artist’s illustration still forming and carving out gaps in the disk of material around their central star. (Credit: J. Olmsted/STScI)

While discoveries of exoplanets are commonplace these days, the most obvious detection method ⁠— directly taking a picture of a planet ⁠— remains one of the most challenging. And such images almost always reveal a single, giant planet orbiting far from its host star.

So researchers were pleasantly surprised to turn up a second planet orbiting around PDS 70, a young star system about 370 light-years away from Earth. It’s only the second multi-planet system observed by direct imaging, and the image shows the star system still in formation, providing valuable evidence about how planetary systems form and evolve.

The first planet found in the system is called PDS 70 b, and it was discovered in 2018. It weighs between 4 and 17 times the mass of Jupiter, and orbits about as far away from its star as Uranus does from our own sun.

The new planet is named PDS 70 c, and it orbits about as far as Neptune does in our solar system. It weighs less than its neighbor, at between 1 and 10 Jupiter masses. Astronomers led by Sebastiaan Haffert, from Leiden Observatory, used the European Southern Observatory’s Very Large Telescope in Chile to take the images. They published their findings Monday in Nature Astronomy.

The central star is marked here by a white star, while the two orbiting planets are circled in red. (Credit: ESO/S. Haffert)

Because the system is so young, only about 6 million years old, the central star is still encircled by a disk of gas and dust, like most young stars. But the planets have cleared out a large gap in this disk, stretching from about 1.9 to 3.8 billion miles away, and are circling the star in this gap.

These kinds of gaps in the dust clouds surrounding young stars have been seem before, and exoplanets are often pointed to as the source of these gaps. As the planets orbit, their gravity sucks nearby material inwards, eventually hoovering up all of the nearby dust and gas, creating a gap. Eventually, a planet will run out of material and stop growing. This is also how researchers think the planets in our own solar system formed. But in many systems, only the gaps are visible, and not the planets themselves.

PDS 70 is direct confirmation of both planets and gaps in the same system, lending strong weight to astronomers’ theories of how planets form. Furthermore, the two planets are orbiting in a resonance, with the inner planet circling its star twice as often as the outer planet. Such resonances can cause the planets to migrate over time, and researchers suspect that this kind of resonance between Jupiter and Saturn shaped much of the solar system’s early history.