Scientists say that early dinosaurs survived the mass extinction between the Triassic and Jurassic periods because they adapted to the cold. 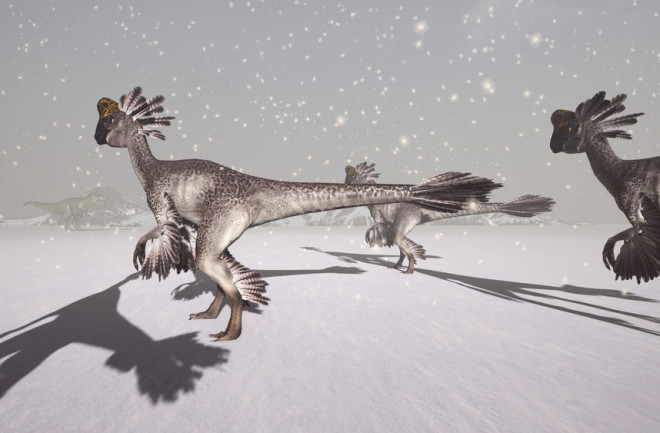 Dinosaurs dominated the Jurassic, but before that, they were outcasts in a strange, reptilian Triassic. Tanystropheus with three-meter-long necks, aetosaurs with armored shields on their backs and drepanosaurs with prehensile tails, reigned before dinosaurs took the throne.

New research shows that dinosaurs were able to overthrow reptiles as kings of the planet because they adapted to the cold. They found "cold snaps," or sudden cold weather, partially caused the mass extinction between the Triassic and Jurassic. Dinosaurs survived the decades-long temperature dips just fine while cold-blooded reptiles froze into extinction.

The Late Triassic is generally thought as the “greenhouse Earth.” Volcanic eruptions blasted carbon dioxide into the atmosphere at record levels, warming the earth and acidifying the oceans. There’s no evidence of polar ice sheets. Instead, forests extended into the higher latitudes.

But volcanic eruptions also spewed sulfur aerosols into the atmosphere, which reflected sunlight and cooled the planet. Climate models suggest that the poles must have frozen over for decades at a time. However, there hasn't been any geological evidence of freezing.

The researchers found the first evidence for decade-long cold snaps in the ancient lakes of northwest China. The lake basin is made of fine silts and sands. But unexpectedly, the researchers also found pebbles up to 1.5 centimeters wide.

The only way these pebbles could have gotten there, the researchers say, is if drifting chunks of ice carried them.

“This is the first evidence of truly icy conditions,” says Randall Irmis, curator of paleontology at the Natural History Museum of Utah in a press release.

What’s even more surprising — the ice-carried pebbles were found alongside dinosaur footprints.

“This shows that these areas froze regularly, and the dinosaurs did just fine,” Dennis Kent, co-author and research scientist at Columbia University says in a press release.

The dinosaurs probably had insulating feathers and warm-blooded metabolisms that allowed them to exploit polar forest vegetation for millions of years. These adaptations helped them invade the equator and diversify into empty niches when freezing winters decimated the defenseless reptiles.

“Dinosaurs living at high latitudes just so happened to already have winter coats [while] many of their Triassic competitors died out,” adds Stephen Brusatte, a professor of paleontology at the University of Edinburgh in a press release.

The implications might surprise amateur dinosaur enthusiasts. Early dinosaurs evolved in the sheer cold — not the lush jungles of Jurassic Park.