Did the rich support Barack Obama? 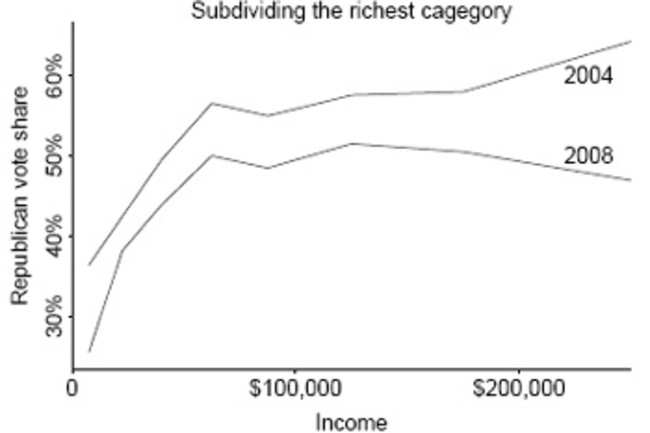 Andrew Gelman reports the finding from the national exit polls that the highest income brackets seem to be leaning toward the Democrats this cycle. The difference between 2008 & 2004 is striking and of note. But, remember that $100,000/year in Palo Alto is a working stiff. $100,000/year in Little Rock is a very good living. I suspect that throwing all the data together into one pot and not correcting for regional differences in cost of living removes important information. The correlation between income and region, and voting and region, might mask the true relationship between income and tendency to voting for Republicans. By this, consider that the income in San Francisco is much higher than in Fresno, and San Francisco supported Barack Obama to a far greater extent than Fresno did. This results in the outcome that those with higher incomes (San Franciscans) tended to support Obama in the sample. But, it might still remain that in both San Francisco and Fresno higher income is correlated with Republican orientation.