Did "Cosmos" Pick the Wrong Hero? 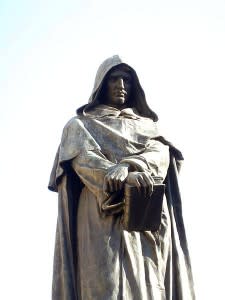 Special effects have advanced greatly since Carl Sagan’s 1980 original; the new visualizations are both more dramatic and more realistic. Science has advanced greatly as well. The updated Cosmos discusses free-floating planets between the stars, shows real images of Uranus and Neptune, and gives a precise age to the universe (that would be 13.8 billion years). All of these things were unknown 34 years ago.

In overall content, the new series introduces two major innovations. One is a tribute to Carl Sagan, a moving segment  in which host Neil DeGrasse Tyson recalls his teenage encounter with the revered astronomer. The other is an extended tribute to the 16th-century Italian philosopher and theologian Giordano Bruno.

Here is where Cosmos 2.0 runs into its big problem, missing out both on a chance to set history straight and to embrace the generous, forward-looking spirit of Sagan.

Bruno is well known as a martyr to the cause of modern astronomy. As Tyson intones in Cosmos, “for one man, Copernicus didn’t go far enough.” Starting in the late 1500s, Bruno argued not only in favor of Copernicus’s sun-centered cosmology, he also proposed that space was infinite in extent; that stars were other suns, surrounded by other Earths; and that those other worlds were also populated.

His belief in an infinite universe, reflecting the infinite glory of God, got Bruno shunned and exiled from country after country. He grew impoverished and largely friendless, but refused to recant. Eventually Bruno was imprisoned by the Church, and burned at the stake in 1600–10 years before Galileo announced his first observations that confirmed Copernicus was right.

That depiction in the new Cosmos matches the standard textbook story of Bruno, but it is misleading and in some ways downright wrong. For starters, Bruno was not the first to link the idea of infinite space with the infinite glory of God. That idea actually originated with Nicolas of Cusa, a German philosopher who lived a century earlier (and who wrote about the notion of infinite space even before Copernicus, though not in a detailed astronomical way). Nicolas kept his infinite theology within the Catholic framework, however, and suffered no ill consequences for his views. 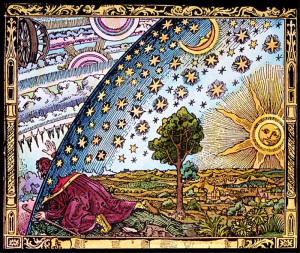 A mystic reaches toward the infinite. This woodcut, adapted in the first episode of Cosmos to depict Bruno, originated in a 19th-century popular science text. (Credit: Camille Flammarion)

A mystic reaches toward the infinite. This woodcut, adapted in the first episode of Cosmos to depict Bruno, originated in a 19th-century popular science text. (Credit: Camille Flammarion)

Bruno also was not much of a Copernican, or by most accountsmuch of an astronomer at all. His interests were theological, not physical, and his astronomical writings are considered amateurish and confused. Bruno’s talents lay elsewhere. He performed great feats of memory (using an early form of mnemonics), he was accomplished in mathematics but also in magic, and he was a true theological and philosophical innovator in his vision of endless inhabited worlds.

In Cosmos, Tyson does carefully say that Bruno was not a scientist, and instead describes that picture of infinite worlds as a “guess.” But Bruno was not guessing. He was advancing his own, heretical theology, which goes a long way to understanding the real reason that he was burned at the stake.

The Roman Inquisition listed eight charges against Bruno. His belief in the plurality of worlds was just one. The others involved denying the divinity of Jesus, denying the virgin birth, denying transubstantiation, practicing magic, and believing that animals and objects (including the Earth) possessed souls. You could fairly call Bruno a martyr to the cause of religious freedom, but his cosmic worldview was neither a deduction nor a guess. It was a philosophical corollary of his heterodox belief that God and souls filled all of the universe.

Despite his heresies, Bruno was neither impoverished nor alone. In reality, he had a series of powerful patrons. In 1579, he was appointed a professor of philosophy in Tolouse, France. In 1581, King Henry III of France offered him a lucrative lectureship at the Sorbonne. In 1583 he visited England, lived with the ambassador to France, and met regularly with the Court…and so on. The gaunt, lonely fellow you see on screen in Cosmos is not the real Bruno.

Nor was Bruno the simple, humble figure shown on TV. A major reason he moved around so much is that he was argumentative, sarcastic, and drawn to controversy. He engaged in bitter academic disputes, many of which had nothing to do with his cosmic framework. One example He fled France because of a violent dispute about the proper use of a compass (seriously).

None of this means that Bruno in any way deserved his fate. But neither does he deserve to be reduced to a cartoon about intellectual freedom. He was a brilliant, complicated, difficult man.

Bruno’s impassioned statements and outrageous personality alienated many of his natural supporters. Neither Johannes Kepler nor Galileo thought much of him. Kepler even wrote specifically to refute Bruno’s ideas. Citing Bruno as the “one man” who dared to go beyond Copernicus also obscures another, equally important and often overlooked historical figure.

While Bruno was making grand pronouncements and racking up enemies, Thomas Digges was quietly doing much more to bring the ideas of Copernicus into the  mainstream of European thinking. Digges was one of the leading astronomers in 16th century England–a place where Catholic doctrine obviously did not hold the kind of sway that it did in Italy. In 1576, Digges published the first English translation of Copernicus’s revolutionary (literally) text, De revolutionibus.

Digges’s goal, in the words of science historian Francis Johnson, was to make the ideas of Copernicus and the sun-centered universe available “to the skilled artisans and mechanics whose intelligent co-operation was so necessary to successful research in the sciences.” Digges was not just an astronomer, he was also a popularizer of science. You might call him the Carl Sagan of his day.

The universe of Thomas Digges, 1576. He placed the stars outside the orbits of the planets--the first explicit illustration of infinite space. (Credit: Galileo Project)

The universe of Thomas Digges, 1576. He placed the stars outside the orbits of the planets–the first explicit illustration of infinite space. (Credit: Galileo Project)

Along with his translations, Digges added commentary and new ideas, making it clear that the Copernican model was more than philosophy, it was a physically real model of the solar system. Even more significant, it was Digges–not Bruno–who first broached the idea that a sun-centered universe could well be infinite in extent.

If all revolved around the Earth, then the stars needed to be confined to a shell that could likewise circle around us once a day. But if the Earth is in motion, then there is no reason why space could not be open and unbounded. Digges made this point explicit and even created a drawing showing, for the first time in history, how the stars might be scattered through endless space outside our solar system.

All of this seems very much in the spirit of Sagan: taking an audacious idea, explaining it to a broad audience, and citing philosophical precedent from classical Greek literature to show that the idea was not so heretical after all.

Science and Religion in Tandem

OK, you may still be thinking that this is much ado about nothing, splitting hairs over old astronomical history. I believe otherwise. The story of Bruno and Digges has a lot to say about the way science operates today, and about the spiritual side of science that Sagan was so adept at exploring.

One irony of the Cosmos narrative is that Bruno very likely got some of his ideas from Digges, since Digges was widely read and Bruno spent two years in England in the 1580s. A second, deeper irony is that in trying to show how science and religion sometimes worked hand in hand, Cosmos missed a chance to showcase a key episode in brokering peace between the two sides.

Bruno was a pugilist and an ideologue. In many of his ideas he was right–wildly, spectacularly right–but his method of spreading his ideas alienated his supporters. More importantly, his ideas sprang from faith nearly as much as did the ideas of the Church; Bruno was far from a scientist in the modern sense.

Digges, in contrast, was focused on advancing the work of Copernicus. He helped lay the intellectual groundwork for Kepler and Galileo, and established England as a beachhead of progressive scientific thought. “The influence of Digges’ treatise on contemporary astronomical thought can hardly be overestimated,” Johnson continues. Digges grafted the idea of infinite space onto Copernicus’s idea of a sun-centered solar system, showing that the two ideas naturally go hand in hand.

By presenting the heliocentric system not as heresy but as an extension of classical learning, Digges pointed out a path forward: away from superstition and theological debate, toward the modern world in which scientific theories own real power as physical descriptions of nature. He also implicitly presented science as a cumulative intellectual journey, with each generation expanding on earlier ideas, testing their validity, inviting further questions.

I suspect Carl Sagan would approve. Over to you, Cosmos, for episode 2.

Planet EarthThe 6 Most Iconic Ancient Artifacts That Continue to Captivate

The SciencesSo You Know What Generation You Belong To — What Does That Even Mean?
Recommendations From Our Store