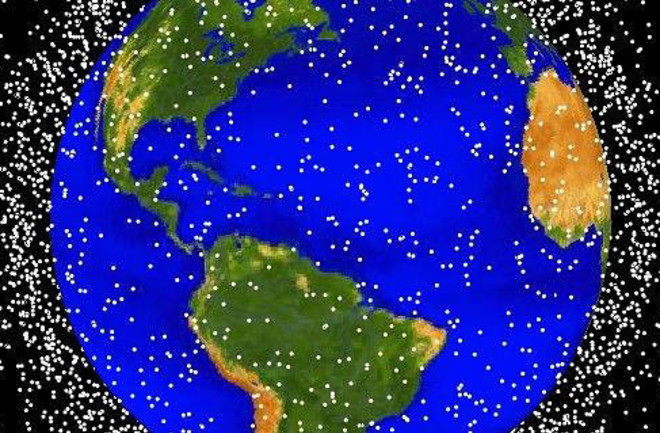 Humans have a tendency to litter wherever we go. Whether it’s the local park, a music festival, or Mt. Everest, we’re just not good at cleaning up after ourselves. And space is no exception.

Space is pretty big. Infinite, in fact. But the same can’t be said of low-Earth orbit (LEO) and, in particular, the most popular orbital lanes used by Earth-sensing and communications satellites. We’re launching more objects skyward every year and not, in many cases, cleaning up when we’re done with them. So the space around us is starting to fill up.

Even tiny objects can cause serious damage at orbital speeds. (Credit: ESA)

Even when Sputnik launched in 1957, it wasn’t alone. The shiny ball was accompanied by its core stage and payload fairing, both of which tumbled around Earth in nearby orbits. Much of the hardware we launch is similarly partnered, meaning each launch can be responsible for multiple pieces of orbital debris. Much of this “debris” is, of course, composed of hard-working satellites performing valuable jobs. But the majority is derelict, either drifting past its useful lifetime or genuine trash like the spent rocket stages. And “drifting” is a relative term here: Some objects in orbit are moving at up to 17,000 miles per hour.

As human technology needs have become greater, we’ve also become more reliant on growing numbers of satellites. Newly proposed “constellations” of dozens or even thousands of satellites could greatly expand the number of artificial companions in orbit around us —communications networks more or less require them in order to deliver global coverage. The well-established Iridium satellite phone network uses 66 satellites (plus a few spares if something goes wrong — more on that below). SpaceX recently received FCC approval to launch roughly 12,000 satellites for their planned space-based internet.

Many of the new generation of satellites could by tiny, but numerous. CubeSats are tiny satellites much touted as gateways for even small research groups or companies to gain access to space science, thanks to the low cost of launch and development. But that very ease of access means they’re flooding the skies in greater numbers every year.

The more cluttered space becomes, the greater risk there is for a collision. And this is no hypothetical. In fact, a large fraction of the debris we know about in space is the result of just two past collisions. The first, in 2007, was China’s intentional “destruction” of a weather satellite as a test of their ability to destroy objects in space. The problem is that while they very successfully demolished the satellite (one China also owned, by the way), what they also did was turn it from one orbiting object into a few thousand, many of which are still circling us today. These drifting bits of debris are a lot harder to track than one derelict weather satellite. This alone angered other space agencies, not to even mention the thorny issue of militarizing space.

The second noteworthy event happened in 2009, when an active Iridium satellite crashed into a deactivated Russian communications satellite. The resulting accident created a debris cloud similar to the one from the intentional destruction of the Chinese satellite two years earlier, but much more frightening. After all, you can at least try to tell the Chinese government to knock it off, but you can’t stop Newton’s laws of motion once the satellites are already up there.

So, to recap: There are working spacecraft, derelict satellites, discarded remnants of past launches and repair jobs and a few thousand pieces of barely trackable former satellites whirling around the Earth at velocities high enough to make even a grain of sand a killer. There are also a few million pieces smaller than golf ball-sized that we can’t track, but which could still punch a hole in a lot of delicate equipment. Some burn up in the atmosphere, but most will be up there for the foreseeable future.

So what are we doing about all this dangerous orbiting debris?

We’re monitoring the situation, to start. NASA and other agencies are doing their best to keep track of where this orbital debris is, down to the smallest pieces they can track. But it’s an inexact science, and smaller objects, or those tumbling haphazardly, can only be tracked approximately. Objects in LEO pass within a few kilometers of each other every single day. When they’re on tighter trajectories, the satellite operators can usually adjust their course, but this relies on at least one of the objects still being under human control. If both pieces are out of fuel or otherwise not maneuverable, there’s little operators can do.

For astronauts in the International Space Station, protocol is for them to hunker down in the Soyuz capsule if a collision or near-miss is expected, much as they do for any dangerous situation. (A recent hole discovered in said capsule — which may have come from an orbital collision — reveals even that strategy has its dangers, though.)

RemoveDEBRIS is a satellite designed to test various ways of cleaning up orbital clutter. (Credit: NASA)

Cleaning Up Our Act

Space agencies and private companies are under more and more pressure to clean up after themselves. This means making sure to de-orbit their satellites and accompanying space trash, either by driving them low to burn up in Earth’s atmosphere or flying away to higher, less-crowded orbits. But there aren’t any space police to make people follow the rules, meaning enforcement of these policies is no guarantee.

How to De-Clutter Space

Instead of preventing new debris, a group of researchers at the University of Surrey are trying to deal with the trash that already exists. This past September, they tested out a satellite called RemoveDEBRIS. The small craft threw out a net in orbit, grabbed a hunk of test trash, and set it on a new course to burn up as harmless wreckage in Earth’s atmosphere. (Most plans end with burning up debris in Earth’s atmosphere. While it sounds dangerous, the odds of any piece making it through to damage Earth’s surface are staggeringly low.) It will also test harpooning objects to collect them, and using cameras to navigate and report on nearby debris.

To avoid being called a hypocrite, at the end of its life RemoveDEBRIS will deploy a sail to drag itself into Earth’s atmosphere and burn up.

Scientists at Tohoku University in Japan are working on a different solution. This one involves ion-beam shepherding, a sort of anti-tractor beam concept that hasn’t been tested in real life yet, but is plausible with current technology. The idea would let a satellite push orbiting debris into Earth’s atmosphere, a more renewable plan than throwing nets at trash.

Whatever the solution, humans should start figuring it out quickly, because we don’t seem likely to stop launching hardware skyward anytime soon.