Tomorrow's astronauts will have greater range of motion, protection and even style if this spacesuit designer has her way. 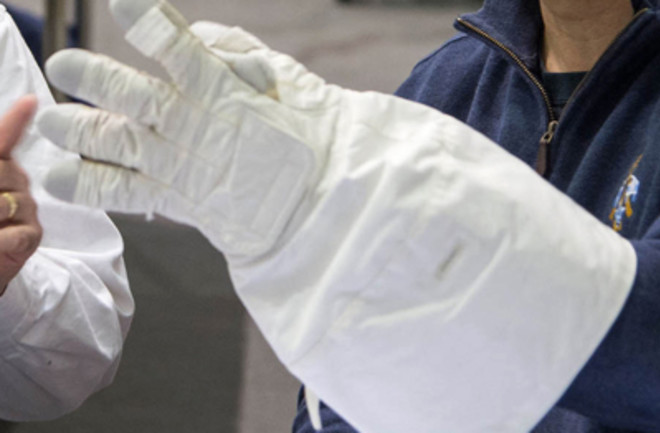 NASA’s current generation spacesuit, the EMU (Extravehicular Mobility Unit), is as awkward as its avian namesake. The suit weighs 310 pounds on Earth and needs to be inflated with gas to provide the necessary pressure (4.3 pounds per square inch) the body needs to survive in places with little or no atmosphere. Otherwise, the reduced pressure would boil the fluids in the astronaut’s body, causing them to expand as bubbles and vapors form under the skin, something even less pleasant than it sounds.

MIT engineer Dava Newman decided to overcome the EMU’s deficiencies with a futuristic alternative: the BioSuit. Although NASA isn’t currently funding her research or suit development, she hopes the space agency will consider her design by the time it sends manned missions to Mars in the coming decades.

The leotard-like BioSuit would allow astronauts to do backbends and more with ease, impossible in today’s EMU. Here’s how this spacesuit of the future could fix the problems of the past.

EMU: NASA calls it a “plastic pressure bubble,” and it looks like a place to put a pet fish rather than someone’s head. The helmet seals onto the hard-shell torso via an O-ring, and once it’s locked into place, it won’t move.

BioSuit: An astronaut can’t run an asteroid mine with a face wrapped in elastic, so this suit, too, has an air-pressurized helmet. It is gas-pressurized via a neck seal akin to a commercial diving helmet’s. Newman’s groupis working on a new kind of airtight joint that will provide natural movement and allow astronauts to turn and look over their shoulders. But they still won’t be able to scratch their noses.

EMU: Glove fingers, though capped withsilicone rubberfingertips for a better grip, are stiff and bloated.

BioSuit: Since fingers can move in so many different directions, glove design has been one of the hardest challenges. Other teams have provided initial prototypes for gloves that use mechanical compression to provide maximum mobility and dexterity for the gloves’ wearers.

BioSuit: Elastic undergirding, Spanx-style, provides about two-thirds of the necessary counterpressure to keep someone alive in a vacuum. Active nickel-titanium coils incorporated into the second skin contract if electricity’s applied, essentially shrink-wrapping the suit the rest of the way — no gassy overwrap required. In the latest tested prototype, the metal stretches over non-stretching parts of skin, so a seam won’t pop while bending to investigate a Martian pebble.

What If It Rips?

EMU: If a traditional spacesuit gets torn, it immediately begins to decompress. The mission aborts, and the astronaut must swiftly return to the spacecraft. But he or she might die before arriving because the gait from the EMU is so awkward.

BioSuit: A rip in the elastic of this get-up? No problem.A space version of an Ace bandage will do the trick.A tight squeeze is all that’s keeping the astronaut alive,so wrapping the bandage around the hole will recompress the affected area.

[This article originally appeared in print as "A Sexier Spacesuit."]