Beneath the waves, ocean animals with bizarre and exotic ways of seeing create new points of view. 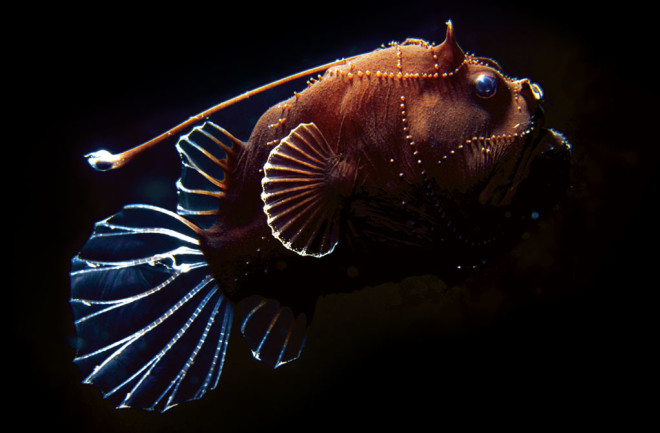 Of all the human senses, the visual system—the network that turns light into neural signals that create the perception of sight—is the most studied and best understood. Our intense curiosity about sight is no coincidence; we are animals who judge the world mostly by appearances rather than, say, aromas. But our eyes afford us only one view out of a multitude of possibilities. In the depths of the ocean—a world we are beginning to learn about in detail, thanks to new views provided by unmanned submersibles—marine species have developed visual systems drastically different from our own.

Most eyes, whether on land or in the sea, share two basic components: something to focus light as it hits the eye (for humans, a cornea and lens), and something to absorb and detect that light (a retina). Then the divergences begin. Among ocean creatures, eyes have evolved a bewildering array of structures suited to each animal’s ecological niche and the depth at which it lives.

Some amphipods (deep-sea crustaceans) rely on biological fi ber-optic cables to send light to their retinas. Sight-dependent, ocean-roaming predators like the swordfish have excellent vision, whereas many creatures that live at great depths can make only simple distinctions between light and dark.

Light is abundant in the sun-dappled shallows, but 50 feet below the surface, only blue wavelengths make much headway. By about one mile down, the last traces of sunlight disappear. In this realm of perpetual night, the only illumination is manufactured, provided by the many creatures that generate their own light via bioluminescence.

As they search for prey, swordfish often swim through cold, deep water, occasionally diving as far as 3,000 feet below the surface. But even in the chilly depths, the swordfi sh keeps its eyes and brain 10 to 15 degrees (Celsius) warmer than the surrounding water by means of an unusual heat-generating muscle near the fi sh’s eye. Vision researcher Kerstin Fritsches of the University of Queensland in Australia, along with colleagues there and in the United States and Sweden, found that keeping warm improves the swordfish’s vision. At 20°C, the scientists found, a swordfish retina can detect objects moving five times as quickly as the objects it can spot at 10°C. Since swordfish hunt speedy prey like squid, the ability to see fast-moving swimmers is crucial for finding dinner.

Focused on the Big Picture

The box jellyfish (left) has surprisingly sophisticated eyes. It possesses a total of 24, divided among four eyestalks at the corners of its body. Four of the eyes on each stalk are simple pigment cups, deposits of lightsensing cells that help it distinguish between bright and dark. The other two (see inset, below) are complex, with lenses that produce high-quality images—but those lenses focus light well below the retina, meaning that the images are out of focus when they hit the light receptors. “They’re not really interested in fine details,” says biologist Dan Nilsson of the University of Lund in Sweden. Once the jellyfish can see the outlines of its environment, signals from its four simple brains (one in each eyestalk) steer it home to shallow coastal waters from Puerto Rico to Australia — and, unfortunately, toward tropical beachgoers, who dread the animal’s dangerous sting.

Ostracods — cousins of shrimp, lobsters, and crabs — range in size from as small as a pea to as large as a grape. They look like balloons with two enormous eyes. Living at depths of 2,700 feet and greater, the ostracod known as a gigantocypris uses its concave, mirrored eyes to focus what little light it can on its retinas. What this design lacks in clarity it makes up in efficiency: Gigantocypris’s eyes are the best lightgatherer around, more efficient than even the finest camera lens.

The mantis shrimp, a denizen of tropical waters, leads a particularly vibrant life. University of Queensland neurobiologist Justin Marshall found that this crustacean has 12 different color receptors—cells in the retina that are sensitive to different wavelengths of light. (Humans have only three.) These shrimp behold a world we cannot begin to imagine: In addition to seeing a much richer spectrum, they perceive linear and circular polarized light. Marshall suspects the ability to see polarized light “probably has something to do with sex.” A flash of polarized light reflected off a female shrimp, for example, could catch the eye of a potential mate without attracting unwanted attention from predators.

Amphipods rely on a vision strategy common in the deep sea, says University of Sussex biologist Michael Land. One large eye looks upward, searching for animals silhouetted against the dimly lit surface, and a smaller eye looks down, ready to detect flashes of bioluminescence. “The eye that looks upward has a great, big light-collecting ability,” Land says. “Detecting low contrast is difficult, and you need as many photons as you can get.” Bioluminescence, on the other hand, is much brighter, so the amphipod’s downward-looking eye doesn’t need to be as efficient.

In the deep-sea darkness, beyond the reach of the sun’s rays, some creatures make their own light. Organically created light, or bioluminescence, is so useful that it has evolved independently about 40 times during the course of life on earth, says bioluminescence expert Edith Widder, founder and CEO of the Ocean Research and Conservation Association in Fort Pierce, Florida. Female anglerfish like this one let someone else do the work, relying on colonies of light-emitting bacteria to give their lure its distinctive glow. The visual systems of male anglerfish are attuned to this light source; they can tell whether a female belongs to their species just by the shape of her lure.

See and Be Seen

The atolla jellyfish, found in oceans across the globe, is high on beauty but low on brains: Look beyond these scarlet tentacles and you will find that the creature has no central nervous system. Since it lacks the neural architecture to make sense of complex visual information, the jellyfish must rely on its simple but numerous pigment cups. When attacked, as part of its defense, the atolla launches a stunning blue bioluminescent display visible for hundreds of feet through the dusky mid-depth waters where it lives. Blue hues are the only colors of light able to penetrate that far below the surface, so the atolla’s red pigmentation normally renders it largely invisible.

Despite its enormous size — a fully grown specimen can measure more than 30 feet long — the prayid siphonophore is a passive creature that lures other animals to fight its battles. When attacked, the prayid lets loose a bioluminescent burglar alarm, lighting up the deep sea for hundreds of feet around. This display shines a spotlight on whatever beast is trying to eat it, encouraging the attacker’s own predators to move in for a meal. The first time Widder piloted a submersible, she unknowingly brushed against one of these giants in the Santa Barbara Channel, causing it to shine bright blue from end to end. Despite its powers of illumination, the prayid siphonophore itself has no eyes.