Because you are small and the Earth is big, getting knocked on the noggin by a meteorite is a low odds event. But a big meteorite, say one 100 yards across, doesn't have to directly fall on top of you to shuffle you off this mortal coil. It could land kilometers away and the blast wave (or the heat) could do you in. And a bigger one can land hundreds of kilometers away and still snuff you out, especially if it hits in the ocean and causes a big tsunami to march over the beaches and coastlines. However, big asteroids coming in and whacking us are much rarer than small ones; if you go out on a clear night you might see a dozen meteors caused by rocks smaller than a grain of sand, but you could wait 100 million years for a dinosaur-buster. You have to account for that as well. This is a calculation worth doing, because a) a lot of people fret about it, and b) it could in fact mean the end of all life on Earth. That might be worth knowing. 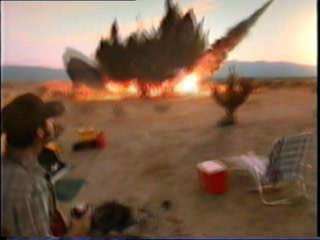 Astronomer Alan Harris has made that calculation. Allowing for the number of Earth-crossing asteroids -- the kind that can hit us because their orbits around the Sun intersect ours -- as well as how much damage they can do (which depends on their size), he calculated that any person's lifetime odds of being killed by an asteroid impact are about 1 in 700,000. One out of seven hundred thousand! That's still pretty low... and certainly not enough to lie awake at night worrying about it. But there are a few important things to consider. 1) A big asteroid is rare, but one bigger than about 10 km across would kill everyone, all 6 billion of us. That skews the odds. If one of those hit every 100 million years, then your lifetime odds of dying in an impact is 100 million years divided by 70 years = 1 in 1.5 million. A small impact might happen 1000x more often (every 100,000 years), but might only kill 1/1000^th as many people, so the odds are roughly the same. Weird. 2) We are lousy at understanding low probability events. I know that 1 in 700,000 is a ridiculously low probability, but it's hard to grasp. As a comparison, you're more likely to die in a fireworks accident. But what's funny is, this is a slightly higher chance than being killed by a terrorist! Despite propaganda to the contrary, the odds of any given person being killed by a terrorist attack are incredibly low. While terrorist attacks in the long run are a near certainty, the odds of you getting killed are very low. It's like the lottery: someone wins every time (eventually), but chances are it won't be you. Worrying about preventing a terrorist attack is a good idea, but (unless you work in a high-risk job) worrying specifically about dying in one is not^*. Incidentally, you have about the same odds as being killed on an amusement park ride. Wheee! And that brings us to one more thing to consider: 3) We need only spend a relatively small amount of money to drop those odds a lot more. We spend billions on terrorist attacks, but hardly anything on preventing asteroid impacts. Yet, of all the ways we can die from astronomical events, asteroid impacts are both the highest probability event and the only ones we can prevent. We can't stop the Sun from blasting out flares which take down our power grids, or a nearby star from exploding. But we do in fact have the technology (or will in literally ten years) to detect incoming asteroids and then move them out of the way. I won't go into details here -- go read the B612 Foundation's site for info -- but this tech will exist as soon as we have the Ares rockets ready to launch in 2015 or so (and I suspect the heavy-lift rockets already in use by other countries might do as well). The investment will be a few billion dollars, but the outcome is preventing the wiping out of the human race. Per capita, I think that's worth a few bucks.

Me, in front of Meteor Crater in Arizona. The far rim is almost a mile away. Click for more impact.

Note: If you're curious for more, I have a lot more detail about asteroid and comet impacts in my book. A lot more.

^*That is, if an attack is on the same scale as previous ones. A really big event -- the use of a dirty bomb, poisoning of a water system, or some other cheery thing like that -- will up the odds quite a bit.