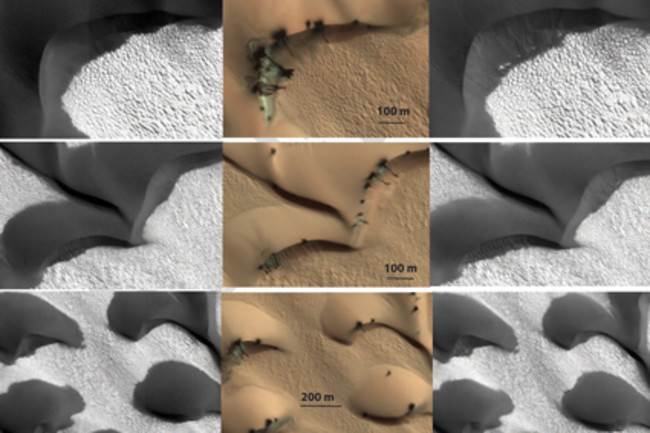 Across the far northern regions of Mars, a sea of dunes dots the red landscape, continuing on for thousands of miles. At first glance they appear like fossils of geography—reminders of a time when Mars was vivacious and windswept that now find themselves encrusted and stationary. Looks can be deceiving. A research team confirms in Science this week that Mars' dunes are not static. Atmospheric processes forged by the turning of Mars' seasons cut into the dunes and send sand flying about. Scientists just couldn't see it before.

"I was hoping for tiny little changes to be detectable," planetary scientist Candice Hansen-Koharcheck with the Planetary Science Institute in Tucson, Ariz., [said]. "This was more like knock-your-socks-off kind of stuff. It's a very active part of the Mars landscape in today's climate." [Discovery News]

on the dunes, and recorded for two Martian years (four Earth years or so). Earlier HiRISE pictures

suggested that the dunes were not unchanging. These new images show not only that the dunes of Mars are a dynamic place, but, according to the team, that the forces pushing their evolution are not seen on our planet.

The changes could be forged by a layer of frozen carbon dioxide — dry ice — changing directly from solid to steam. “This is a very un-Earthly process,” Hansen said. Every winter, Mars’s polar cap is sheathed in a thin blanket of carbon dioxide. In the spring, the warming ice layer sublimates, or shifts directly to gaseous form without bothering to melt first. This sudden shift destabilizes the dunes and triggers avalanches. [Wired]

The sand avalanches don't look like much from on high, as you can see in the images. But Hansen-Koharcheck says that in some places she saw more than a hundred cubic yards of sand cascading down the dunes over the course of a year.

All in all, sets of images from HiRISE revealed about 40 percent of the locations in this region changed during the time analyzed. This suggests it actually ranks among the most active landscapes on Mars, even though few changes in these dark-toned dunes had been detected before there until now. "We've got to look at Mars as a place that has active geology in today's climate, not just sometime in the past," Hansen said. [Space.com]

80beats: NASA’s New Mars Mission: To Study the Mystery of the Missing Atmosphere