DC-X: The NASA Rocket That Inspired SpaceX and Blue Origin

Two decades before the spaceflight companies of today designed rockets that land themselves, the DC-X had already done it. 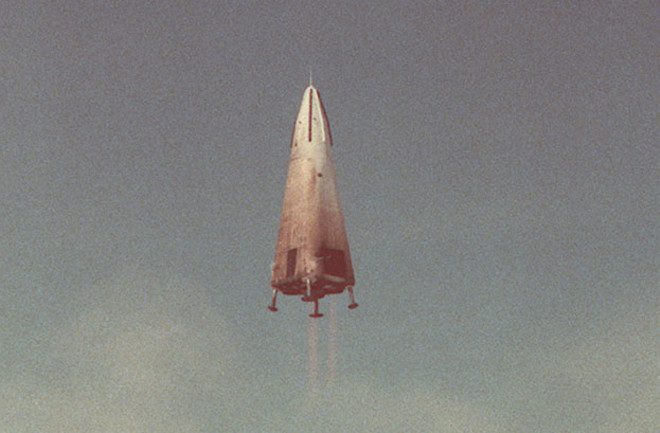 The first flight of the second version of the Delta Clipper, the DC-XA, at White Sands Missile Range in New Mexico. (Credit: NASA)

The rocket looked like it was out of a science fiction movie. A gleaming white pyramid resting on four spindly legs, the experimental craft was NASA’s ticket into a new era of space exploration.

With a series of built-in rockets on its underside, the ship could rise from the ground and touch back down again vertically — the first of its kind.

The Delta Clipper Experimental, or DC-X, could have formed the basis for a new generation of spacecraft. Indeed, a string of successful tests in the desert during the mid-1990s bore that promise out, hinting at future missions to low-Earth orbit and even the moon.

Today, spaceflight companies like SpaceX and Blue Origin are flying rockets based on the same vertical launch and landing concept that DC-X pioneered. The ability to reuse rockets in this way, rather than have them crash into the ocean, promises to bring costs down exponentially.

But almost 25 years ago, that dream of reusable spacecraft seemed quite far away. The DC-X, NASA’s futuristic spacecraft, ended its life in a fiery explosion on the launchpad.

Spacecraft for the Future

The DC-X was born in an era focused on space exploration. NASA’s space shuttle program had made dozens of successful flights to orbit, helping to bring legacy projects like the International Space Station and Hubble Space Telescope to life.

But there were drawbacks to the shuttles as well. Seven crew members died in 1986 when a gasket on the space shuttle Challenger failed. The shuttles also weren’t as reusable as expected.

Schematics for the DC-X. (Credit: Department of Defense)

Until that time, no spacecraft could lift off with built-in rockets and then land vertically. The new rocket was testing never-before-seen technologies for spacecraft, and engineers saw it as an exciting project to be involved with.

“I look back on that time in my career, and I really appreciate it,” says Dan Dumbacher, the eventual project manager for the DC-X program. “We were doing things in the launch vehicles world that weren’t typically allowed.”

Construction started on the first DC-X prototype in 1991, and engineers began testing at the remote White Sands Missile Range in New Mexico on Aug. 18, 1993. For its maiden flight, the craft flew for just under a minute, reaching an altitude of 151 feet. In successive tests, the rocket continued to take off and land almost directly where it began the flight, delivering on the promise of reusability.

Plans to use the spacecraft for regular space travel were mentioned in long-term NASA plans. The agency said the rocket could offer a new, low-cost path to space. And, by one estimation, the price to fly on the spaceship would only be as much as a world trip on the Queen Elizabeth 2 ocean liner.

As the program matured, a new and upgraded version of the rocket, called DC-XA, began testing at White Sands. In 1996, the rocket flew three times, reaching a height of 10,000 feet during one test.

Then, on July 31, 1996, disaster struck. The rocket’s descent went off without a hitch, but as it approached the ground, a malfunction kept one of the four landing legs from deploying. Without that crucial stabilizer, the craft couldn’t quite stick its landing. Instead, it tipped over and exploded.

In the control room, Dumbacher thought the end of DC-XA meant the end of his career. There was the rocket they had spent years working on and testing — burning in front of them.

Then the phone rang.

Expecting a death knell, Dumbacher was congratulated by his boss on a job well done. Though the project had met a fiery end, it was ultimately considered a success. The team had developed and tested an entirely new spacecraft technology.

“Some people will look at the last test as a failure,” Dumbacher said. “From one perspective, I can see that. From another perspective, we were allowed to push the envelope.”

In less than two decades, that envelope pushing would lead to a new breed of spacecraft based on the same vertical launch and landing concept as the DC-X.

While the DC-X may have been ahead of its time, the burgeoning space industry today has made its vertical launch and landing model highly desirable.

Reusable rockets are cheaper and offer space launch companies the ability to send off more flights in shorter timespans. Companies like Elon Musk’s SpaceX and Jeff Bezos’ Blue Origin rely on the concept to make feasible the economics of taking heavy payloads to space, and it’s likely to define the future of spaceflight.

SpaceX has been successfully launching and reusing a number of rockets and vehicles, even landing Falcon boosters on drone-controlled ships in the middle of the ocean so they can be collected and used again. Blue Origin, meanwhile, plans to send a mission to the moon in 2024 with reusable rockets based on the New Shepard and New Glenn, both vertical-takeoff and -landing spacecraft.

SpaceX has even grander plans for its forthcoming Starship rocket. Musk has said he wants to reach Mars with the craft, which underwent preliminary tests in August.

That rocket, in an eerily similar echo of DC-X’s own desert tests more than 20 years earlier, recently lifted off from Boca Chica, Texas, atop an iridescent javelin of flame and returned gently to the ground just minutes later.

Starship, and others like it, will likely one day form the basis for humanity’s next wave of exploration into the solar system. Dumbacher and the DC-X team might not have known it as they watched their futuristic rocket lift off in 1993, but they were watching the future unfold.