Dawn of an Era: Astronomers Hear and See Cosmic Collision 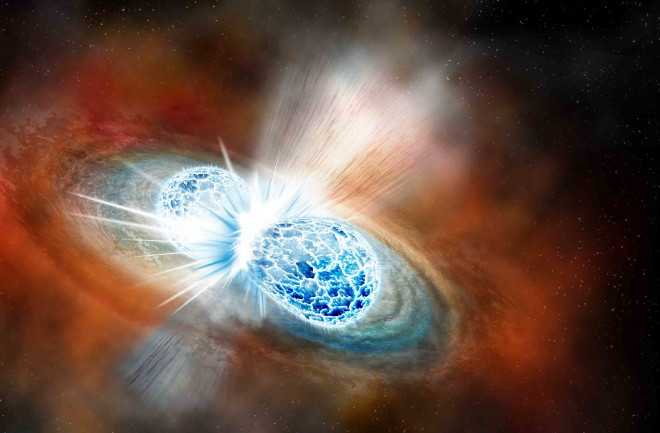 Two neutron stars merge into a kilonova. (Credit: Illustration by Robin Dienel, courtesy of the Carnegie Institution for Science)

Two neutron stars merge into a kilonova. (Credit: Illustration by Robin Dienel, courtesy of the Carnegie Institution for Science) For hundreds of millions of years, two city-sized stars in a galaxy not-so-far away circled each other in a fatal dance. Their dimensions were diminutive, but each outweighed our sun. They were neutron stars — the collapsed cores left behind after giant stars explode into supernovas. Closer and closer they spun, shedding gravitational energy, until the stars traveled at nearly the speed of light, completing an orbit 100 times every second. By then, dinosaurs reigned on Earth, and the first flowers were just blooming. That's when, 130 million years ago, the dance ended. The collision was fast and violent, likely spawning a black hole. A shudder — a gravitational wave — was sent out across the fabric of space-time. And as the stars' outer layers launched into space, the force formed a vast cloud of subatomic particles that would cool into many Earths' worth of gold, platinum and uranium. Seconds later, a blast of high-energy gamma-rays – the most energetic kind of light – punched through the erupting cloud. The space-time ripple and the light crossed the cosmos together, and finally arrived at 6:41 a.m. Eastern on Aug. 17. The gravitational wave first reached Italy's freshly finished detector Advanced Virgo before stretching and squeezing the lasers at America's two LIGO sites. Two seconds later, NASA's gamma-ray detecting Fermi spacecraft caught the blast. In the weeks since, hundreds of astronomers on all seven continents have turned their telescopes and spacecraft to watch the cosmic collision play out in all manner of light – radio, infrared, optical, ultraviolet, X-rays, gamma-rays. The Spitzer and Hubble space telescopes are still watching the event, as is the Very Large Array in New Mexico. Right now, it’s the greatest show in astronomy. “What was surprising with this one was it was extremely close to us, and so it was an extremely strong signal,” says LIGO scientist Jolien Creighton of the University of Wisconsin-Milwaukee. “We were figuring with our full Advanced LIGO sensitivity we might see something like this every few years.”

Ground-based observatories all over Earth, some 70 in all, as well as a handful of orbiting space telescopes, caught the neutron star merger. (Credit: LIGO and Virgo collaboration) In February 2016, LIGO announced they'd detected gravitational waves for the first time, almost exactly a century after Albert Einstein predicted these events as an outcome of his theory of general relativity. Astronomers said that initial detection was like hearing the cosmos for the first time. And they hoped for the next breakthrough — to hear and see the cosmos simultaneously, or so-called “multi-messenger astronomy.” That's now happened. The Multi-Messenger Age “This is the first real multi-messenger astronomy,” says astronomer Josh Simon of the Carnegie Observatories. “There are things you can discover with gravitational waves that you could never see with electromagnetic light, and vice versa. Having that combination should provide us with insights into these extreme objects.” And this neutron star mash-up uncorked a jug of scientific firsts. A press briefing Monday morning outlined some of the dozens of research papers appearing in scientific journals — the main discovery one boasts a whopping 3,500 co-authors. Those discoveries include:

Carnegie Observatories' Swope telescope was the first to image the neutron star merger in optical light. It's a small, decades-old telescope at Chile's Las Campanas Observatory. (Courtesy Ryan Foley) A Race For Photons Ryan Foley and his partner were wandering Copenhagen's historic Tivoli amusement park on what turned out to be an explosive Aug. 17. They'd been in Denmark for a month at a gravitational waves conference but Foley, an astronomer at the University of California, Santa Cruz, had yet to see the sights on his trip. It was a day to relax; a text message would change that. It was from Foley's grad student, David Coulter. LIGO had caught a binary neutron star merger – and so had the Fermi spacecraft. Foley says he was certain his apprentice was just screwing with him on his first day off. After all, the week before, Foley had sounded a pessimistic tone in a room of young researchers as he detailed his plan to use ground-based telescopes to catch any LIGO-detected neutron star mergers.

That time when you made the biggest scientific discovery of your career. #wubbalubbadubdubhttps://t.co/nsyAdnGtx5pic.twitter.com/7KiYHz1KLN

Foley left the amusement park and raced back to campus on his bike. If this was indeed the real deal, there were only a few hours to prepare before nightfall in Chile, where his Carnegie Observatories team had time on a small, 45-year-old telescope called the Swope. Because the signal came from a region of sky close to the sun, it would only be visible for a little while after twilight. And they’d be racing against observatories around the world. The potential payoff: a Nobel Prize. https://youtu.be/blkzghYmX_c Coulter set to work creating a list of about 100 possible galaxies to target based on LIGO’s estimates. Meanwhile, Foley called up two colleagues – Carnegie Observatory astronomers Josh Simon and Ben Shappee – who were each operating one of the twin 6-meter Magellan telescopes that night. “When big things happen, you call in every favor you can get,” Foley says. “You've only got one shot, you either view it or it's gone.” Meanwhile, back in Santa Cruz, team member Charlie Kilpatrick downloaded images of their targets. The three telescopes would quickly image each galaxy and send the data back to California. There, Kilpatrick would compare the new pictures to existing ones looking for signs of a cosmic explosion. Just 20 minutes after twilight, the Swope telescope struck gold with its ninth image. “Found something,” Kilpatrick punched into a Slack group message. There was an enormous bright spot in the galaxy NGC 4993. “Wow!” Foley replied.

Astronomers on the optical light discovery team used Skype and Slack to message across three continents as they imaged the sky. (Courtesy Ryan Foley) Lights, Camera, Action As the target galaxy inched closer to the horizon, Shappee and Simon each turned their titan telescopes to capture its light spectrum – astronomers' method for capturing an object’s chemical fingerprints. Telescope operators usually don't let their instruments point so low for fear of over-rotating and breaking them. Shappee kept observing until the Magellan shut itself down. “I’ve never seen telescopes point so close to the horizon,” says UW-Milwaukee astronomer David Kaplan. It's a good thing, too. Other telescopes also caught the event that night, but Foley's group caught the only spectra. That data went to Maria Drout, also from Carnegie Observatories, who processed it within half an hour, revealing a spectrum unlike anything astronomers had seen before.

All the Galaxy's Gold

You and me, my pet dog, the apple that fell on Issac Newton's head – we're all made from matter that's created in supernovas, which happen about once per century in our galaxy. We're standard star stuff. But supernovas create sparse amounts of heavy elements, like the gold and platinum on your wedding ring, or the uranium world leaders are always fighting over. So how did all the heavy stuff get here? “All the other elements on the periodic table we knew where they came from in the universe,” says Columbia University astronomer Brian Metzger. Neutron star mergers were the leading contender. Metzger predicted these collisions would form a “kilonova,” an event 1,000 times brighter than a standard nova. And other astronomers had showed these kilonovas could produce huge amounts of the heaviest elements. The trouble is, no one had ever seen one. So a fundamental question has gripped astronomers for decades. “Is it the really common thing that makes a little? Or is it the rare thing that makes a lot?” says Kaplan, a co-author on research appearing Monday in the journal Science. That answer arrived on Aug. 17.

An artist's illustration of two colliding neutron stars. (Credit: NASA/Swift/Dana Berry) By the time Foley's team caught the first images of the collision – just 11 hours later – the cloud of material had already expanded as far out as Neptune is from our sun. Those subatomic particles cooled as they pushed outward, and they started combining into heavier and heavier elements. Astronomers involved in Monday's announcement say this one neutron star merger created somewhere between 10 and 100 Earth masses’ worth of gold. And based on how often neutron stars collide, scientists can extrapolate to say there should be roughly something like 100 million Earths’ worth of gold in the Milky Way galaxy. “It’s essentially a way to take a neutron star’s material and turn it into gold,” Metzger says. “And not just gold but platinum and uranium and anything you see at the bottom of the periodic table.” Considering that this collision happened 130 million years ago in its own galaxy, all those heavy elements have likely already mixed in with interstellar gas clouds that will someday form new solar systems like our own. And here on Earth, this one event has settled decades of scientific debate. “At least for the heaviest elements, this issue has been put to bed,” Foley says. Multi-messenger astronomy is just getting started. When LIGO comes back online next year after another round of upgrades, scientists expect to see one of these mergers every month or so. In the years to come, that number could grow to once a week – though astronomers don't expect many more neutron stars to merge this close to home. “We've created a new field of astronomy,” Foley says. “We've been walking around for all of humanity being able to see the universe but not being able to hear it. Now we get both.” He adds: “It's even hard to predict where this field will go, but I can tell you now it's going to be exceptional.”