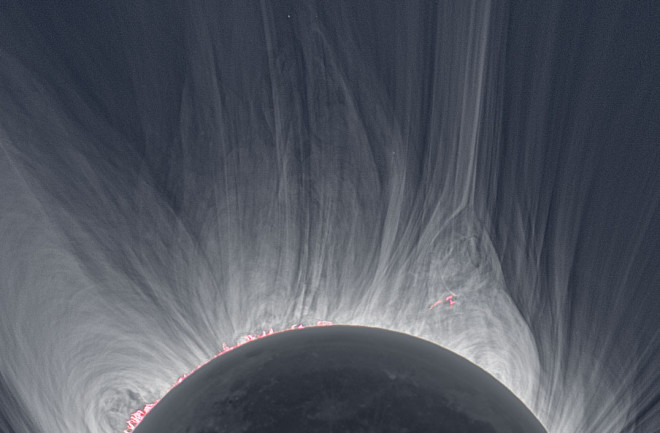 An image of the sun's corona taken during a 2008 solar eclipse in Mongolia. (Credit: Miloslav Druckmüller (Brno U. of Tech.), Martin Dietzel, Peter Aniol, Vojtech Rušin) When the moon slides in front of the sun Monday, millions of viewers will catch a glimpse of the sun's corona, which will appear as a hazy glow outlining the solid shadow in front of our star. Scientists will be watching closely as well, because eclipses are one of the few times they can easily gather data on a region of the sun that is still poorly understood. The corona is the atmosphere of our sun, a swirl of charged particles that extends millions of miles into space, swept into filamentous loops and coils by the sun's powerful magnetic field. It's spread thin, which is why we can't normally see it, but the corona is hot, reaching millions of degrees kelvin at times, far more intense than the surface of the sun.

This paradoxical increase in temperature has long puzzled scientists — it's like flying into Earth's upper atmosphere and finding temperatures in the thousands of degrees. The sun has something our planet doesn't, however — an intense magnetic field, the result of the frenzied motion of electrically charged plasma within its interior. The contortions of the sun's magnetic field are responsible for solar flares and coronal mass ejections, and it drives the solar wind that produces auroras here on Earth. Researchers theorize that the force the field exerts on charged particles in the corona imparts enough energy to produce the blazing temperatures. A phenomenon called "solar braiding" could be aiding the heating as well. The sun's magnetic field lines are chaotic, intertwining with each other in a constant wrestling match, and when they finally break apart their stored energy is released all at once. Another mystery for researchers is why the corona appears to be so well-ordered. The sun's surface, where the magnetic fields that influence the corona originate from, is complex and disordered, and you would expect the corona to reflect that. Instead, the corona is dominated by threads and coils, distinct enough that we can see them with the naked eye during the eclipse. Despite the chaos at the sun's surface, these structures display a remarkable intransigence, and figuring out why could give more insights into the sun's magnetic field behaves. A mission planned for the eclipse this Monday may do just that. A pair of NASA jets will tag-team the length of the eclipse across the U.S., racing the moon to maximize the length of totality. Outfitted with sensors and cameras, the two planes will return a roughly seven-minute video of the sun's corona, allowing researchers to watch it shift and evolve and hopefully elucidate how the patterns emerge. Flying at around 50,000 feet, the jets will escape much of the distorting effects of the Earth's atmosphere as well, granting increased clarity and precision. They also plan to aim instruments at Mercury, taking advantage of the sun's absence to attempt an infrared reading of the planet's surface composition.