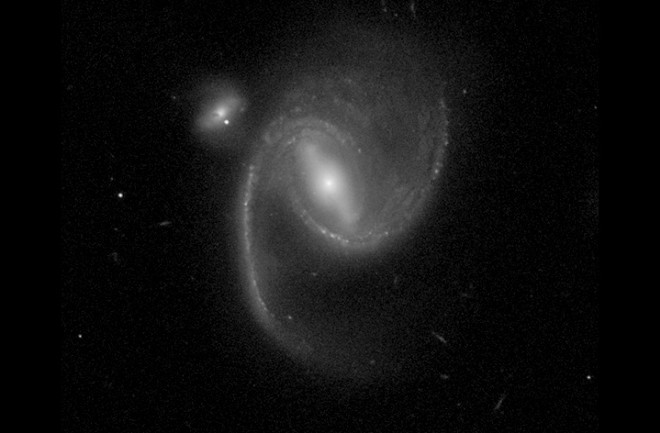 The larger the spiral galaxy, the faster it spins. That’s a well-known fact for astronomers. But a few years ago, researchers discovered a new class of jumbo-sized spiral galaxies; astronomers call them “super spirals.”

And, in a surprise find published in The Astrophysical Journal Letters, researchers now say that these super spirals are actually rotating even faster than predicted based on the visible sizes of the galaxies. The fastest of these super spirals whips some of its stars around at up to 350 miles per second. By some estimates, that’s nearly three times as fast as our sun circles the galaxy.

This means these gargantuan galaxies have higher dark matter to visible matter ratios than smaller spirals, like the Milky Way, to account for the extra rotation speed. The finding also suggests something else: a maximum size for how big a spiral galaxy can get.

Astronomer Patrick Ogle was looking into the brightest galaxies recorded in galaxy surveys when he stumbled across super spirals — spiral galaxies with 10 to 20 times as much visible matter as the Milky Way. The largest, brightest galaxies tend to be blobby elliptical galaxies rather than swirling spirals, so the finding was a surprise.

“People had this opinion that spiral galaxies can’t get much more massive than the Milky Way before they run out of steam for one reason or another,” said Ogle, who is now at the Space Telescope Science Institute in Maryland. Ogle is the lead author of the new study.

He and other astronomers measured the properties of these super spirals and were surprised to find how fast these galaxies rotated.

But super spirals rotated much faster than astronomers would have predicted based on their visible mass, meaning they actually have a much higher ratio of dark matter to visible matter. Ogle and his team think that for the most massive spiral galaxies, the buildup of dark matter might be stopping more stars from forming. So even as they look to larger clumps of galaxy-hosting dark matter, they probably won’t find spirals that are much larger.

For Ogle, the finding is an exciting new way to study how dark matter behaves and affects our universe. He plans to make future observations to further investigate exactly how massive these super spirals are and better understand how they came to be.