Dark Matter is Real. "Dark Matter" is a Terrible Name for It 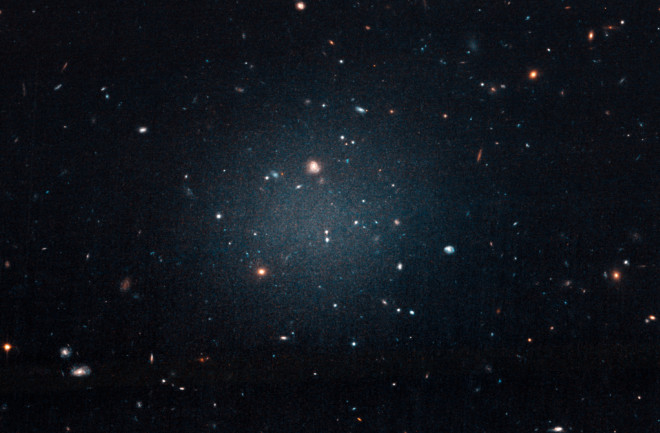 Dwarf galaxy NGC 1052-DF2 is now one of two galaxies that appear to contain no dark matter, a group of astronomers claim. Counterintuitively, this finding could help reveal what dark matter truly is. (Credit: NASA/ESA/P. van Dokkum) Astronomers have been grappling with the mystery of dark matter for a long time, and I mean a looong time. The history of dark-matter investigations goes back at least to 1906, when physicist Henri Poincaré's 1906 speculated about the amount of “matière obscure” in the Milky Way. Or really, it goes to back to 1846 and the first successful detection of dark matter: the discovery of the planet Neptune, whose existence had been inferred by its gravitational pull well before it was actually observed. Since then, scientists have identified many different dark components in space: collapsed stars, interstellar dust, hot gas, planets, black holes. Unfortunately, none of those can account for the genuinely invisible dark matter that seems to make up 26 percent of the mass of the universe, outweighing all ordinary matter more than five to one. Failure to identify dark matter has gone on so long that some people have started to wonder if the whole concept is amiss. The recent discovery of two galaxies that seem to contain no dark matter at all hasn't helped. As often happens these days, some wags on Twitter immediately started joking that dark matter sounds like the fictitious "aether" that physicists sought in the 19th century. But those jokes miss the exciting truth--in fact, they get it exactly backwards. Dark matter is real. It just may be even stranger and more complicated than we thought. To show you what I mean, I'll start by addressing the aether jokes. This is a reference to the discarded belief that empty space can't be truly empty, because light waves and other forms of radiation are able to pass through it. Sound waves are possible because air vibrates. Ocean waves are possible because water ripples. What then, physicists wondered, is "waving" when a light wave passes through a vacuum? One idea, originally advanced by Isaac Newton and widely discussed during the 19th century, was that the vacuum is filled with an invisible substance called aether. If the aether were real, it should be possible to detect. The Michelson-Morley experiment of 1887 looked for the effects of an aether wind that would blow past the Earth as it moves in its orbit around the Sun. Light should appear to move more quickly when the aether is blowing toward us, and more slowly when blowing away. Michelson and Morley found no such effect. One proposed explanation for the null result was that the aether wind causes objects to compress. If objects (including all measuring devices) get smaller in exact proportion to the intensity of the aether wind, then the speed of light would always appear the same: When the wind is blowing toward you, your ruler would shrink, and when the wind is blowing away from you it would appear to expand. This idea was called Lorentz-Fitzgerald contraction, after the two physicists who came up with the concept. Wait a second. The speed of light is the same for all observers, objects appear to contract when moving at high velocities...those are some of the basic elements of Einstein's special theory of relativity! Sure enough, Einstein appropriated some of the concepts and even some of the math from Lorentz and Fitzgerald, but showed that the effects attributed to the aether were actually intrinsic properties of the laws of physics--no aether requried. (Quantum physics, in turn, explained why the aether was unnecessary for the propagation of light, either.) The Michelson-Morley experiment did not, by itself, lead to special relativity, but it was an important part of figuring out how the universe really works.

Stars scattered from their home galaxy (Abell S1063) tend to settle along the surrounding gravitational contours. Vastly amplifying the faint starlight then makes it possible to "see" where the dark matter is. (Credit: NASA/ESA/M. Montes) Be Kind to Your Dark Matter Now we can take a more enlightened and generous look at the puzzle of dark matter. In the 19th century, the simplistic idea was that space must contain some substance that could transmit waves, because the familiar types of waves all worked that way. In the 20th century, the simplistic idea was that gravity from visible matter is the only long-range force acting on the universe, because that was the only familiar force and the only familiar type of matter. The equivalent of the aether model, then, is a model with no dark matter. Then in the 1930s, astronomer Jan Oort and physicist Fritz Zwicky deduced additional gravitational effects that seemed to indicate the presence of additional, unseen matter. Oort measured it within our galaxy and called it "nebulous matter"; Zwicky measured it within clusters of distant galaxies and called it "dunkle Materie," or dark matter. (Gianfranco Bertone and Dan Hooper have published a deeply researched paper on the forgotten history of dark matter, available here.) The name is not important. What is significant here is that they obtained a result that deviated from the naive assumptions of simple gravity and visible matter only. The discovery of dark matter, then, was the equivalent of the Michelson-Morley experiment. Dark matter is not a cover-up to hide a problem in physics. It is not a new aether. It is the provocative, empirical evidence that our physics is incomplete. I know just said that the name is not important, but I'm going to take that back. The name is quite important, actually, in the sense that saying "dark matter" creates specific and misleading assumptions about what we are looking for. The word "dark" evokes black, meaning something that absorbs light, but that's not right. What we are seeking is something that does not interact at all with light. Physicist Lisa Randall therefore prefers the term transparent matter. Even that is still not right, though, because strictly speaking we are not certain that we are looking for matter at all. What we are really seeking is something invisible that generates an anomalous gravitational pull. I’m under no illusions that I am going to displace “dark matter” as the go-to term, but “hidden gravity” is a far superior description. The overwhelmingly predominant scientific view right now is that dark matter consists of a fundamental particle or combination of particles. There are a lot of reasons for favoring this explanation. Physicists have detected 18 different types of elementary particles along with a dizzying 200-or-so composites particles, and it’s clear that the current Standard Model of particle physics is not complete. It is highly likely that there are undiscovered particles out there, and it is entirely reasonable that some of them might not interact with light or other forms of radiation. We already know of one family of particles that behaves as dark matter: the neutrinos. They do not engage with light or with the strong nuclear force, but do contribute a gravitational effect. They just don't contribute nearly enough to account for the observed evidence.

3D map of dark matter (aka "hidden gravity") was created by measuring the way its gravitational pull bends the light from more distant objects, a technique called weak lensing. (Credit: University of Tokyo/NAOJ) The Case for "Hidden Gravity" And mind you, there is a lot of evidence! We see signs of dark matter all across the universe, at a wide variety of scales. It seems to have shaped the initial reverberations of the Big Bang, influenced the production of primordial deuterium and helium, and seeded the formation of galaxies. It appears to provide the crucial gravitational pull that holds those galaxies together, and that binds larger clusters of galaxies together. We can trace it by the way it bends the light in and around those galaxy clusters. Studies show that dark matter somewhat follows the distribution of visible matter, but not exactly and not always. Those discrepancies offer clues about its nature. The discovery of first one, now two small galaxies that appear to have no dark matter supports the notion of dark matter as a particle. Here’s why: If unseen gravity (excuse me, dark matter) were some previously unknown property of physics, we would expect to see it everywhere that normal matter appears. Finding normal matter separated from unseen gravity, and unseen gravity separated from normal matter, suggests that the thing creating that gravity is an entity in itself—a dark particle of some sort. Still, nobody has been able to find that particle despite decades of searches. Claims of annual flux of dark matter passing through a detector in Italy look dubious. Every other direct-detection dark matter experiment has produced null results. Speculation that gamma rays from the center of the Milky Way were caused by decaying dark-matter particles proved unfounded. The results keep coming: nothing, nothing, more nothing. Repeated failures to find a dark matter particle has left the door open a crack for other explanations, most notably alternate theories of gravity that are often lumped together under the rubric of MOND (modified Newtonian dynamics). In this view, the “unseen gravity” component is a previously unrecognized feature of gravity itself, which operates slightly differently under extreme cosmological conditions (long distance, very low density) than it does on Earth or around the solar system. There are even more exotic possibilities. Dark matter might be an entirely new fundamental field, not just an additional component of gravity. It might be a kind of cosmic superfluid. Hell, it might possibly be a manifestation of matter in another universe, which creates an otherworldly gravitational pull that is able to cross higher dimensions. What matters about dark matter is that the phenomena describing it are real, just as the results from the Michelson-Morley experiment were real. The failure of many brilliant scientists to isolate the cause of the phenomena is a strong indication that the answer, whatever it is, will be truly new—which is to say, surprising—which is to say, revelatory. To paraphrase a famous fake quote by Carl Sagan: Somewhere out there, something astonishing is waiting to be known.