Cyberchase is an award-winning animated math and science series for kids from WNET New York, airing on PBS KIDS. The show features the CyberSquad, a group of three earth kids and a cyber-bird, who travel together across cyberspace helping people in need. To solve the problems they encounter, they use math and science. I work as the math advisor for the show. As we develop the stories, we are always looking for ways to help kids experience how math and science are exciting, fun, and relevant, especially as it relates to their understanding of and care for their environment. Citizen science is one great way to make this happen.

To help introduce kids to the concept of citizen science — as with all the concepts introduced on Cyberchase — we embed the content in the narrative conceit of a fictional, fantastical cyberworld, where mysteries are usually afoot. Research on Cyberchase over the years has proven this to be effective and motivating!

An episode from our most recent season, “The Migration Situation,” is a good example. In this story, rare cyber-birds called teal-footed trillers, normally appearing at a certain location once every five years, fail to show up. But then they’re sighted in one odd location, and then another. With the help of a leading triller expert, Professor Bobson, the CyberSquad turns to citizen scientists for help. They put out a call to their friends all around cyberspace to see if and where the birds have been sighted. They prepare a simple survey to gather data about where the birds were, how many there were, and what they were eating. 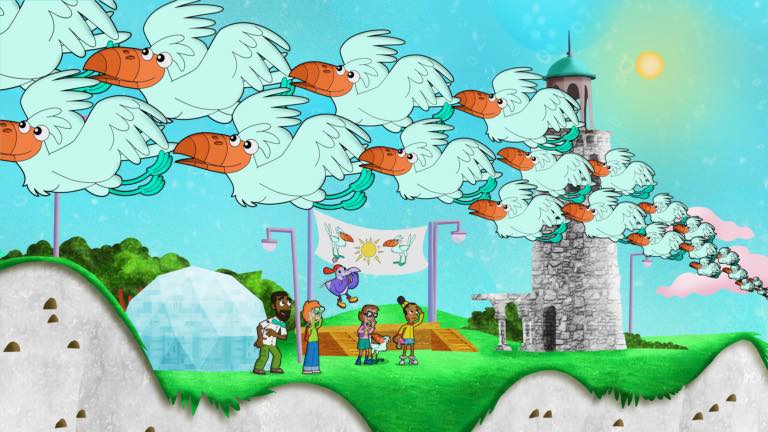 The CyberSquad celebrates the arrival of the teal-footed trillers – located with the help of citizen scientists – in the Cyberchase episode “The Migration Situation.” Image courtesy of THIRTEEN Productions LLC.

All of their friends take on the role of citizen scientists as they observe, gather information, and email the CyberSquad their data and photos. The CyberSquad and Professor Bobson compile it, and by mapping the information and analyzing it carefully, they see a trend and a possible explanation for the problem. Of course, it’s the work of the dastardly cybervillain: Hacker! You can watch the full episode on the Cyberchase website: https://to.pbs.org/2YHUhCu 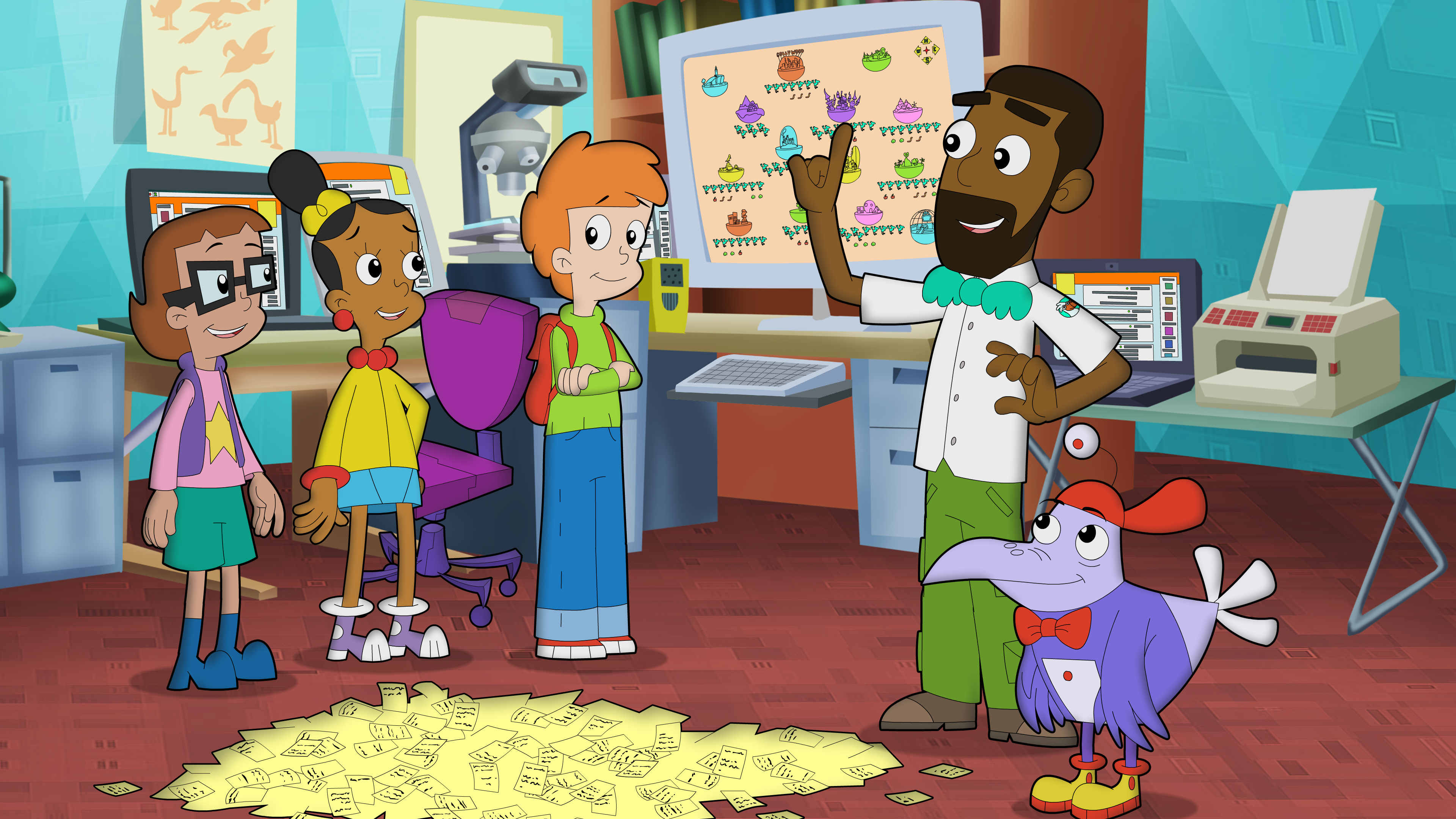 Professor Bobson, an expert in rare birds, shows the CyberSquad how to organize and analyze data from citizen scientists in Cyberchase’s “The Migration Situation.” Image courtesy of THIRTEEN Productions LLC.

As they talk about the problem, Courtney shows Harry an app on her phone which she uses to collect information on noise pollution in the city. The data is collected into a graphic map which she shares with Harry. They see which areas of the city near them are noisiest and quietest, and then consider why. They travel all over the city collecting noise data and sharing it with other citizen scientists using the app to help everyone. Though this app is fictional, there are citizen science projects that map noise pollution. One example is Sound Around Town. You can watch the quick, three-minute video from the Cyberchase For Real segment on the PBS website.

And there’s a new Cyberchase adventure debuting April 19! It’s a special double-length episode, “Space Waste Odyssey.” In this one, the CyberSquad is trying to find out why there is so much trash floating around cyberspace. As they attempt to unravel the problem, they turn to the citizens across cyberspace to gather data and report it back so that the full extent and features of the problem can be determined. Only when they turn to these citizen scientists are enough clues gathered to reveal the problem and help brainstorm a solution. Check out a preview.

Kids of all ages can learn how to be citizen scientists and put their math and science skills to work in real ways. Cyberchase is a great way to introduce young kids to these ideas and help them see the possibilities of math and science in their worlds while having fun, thinking, and enjoying a great story. 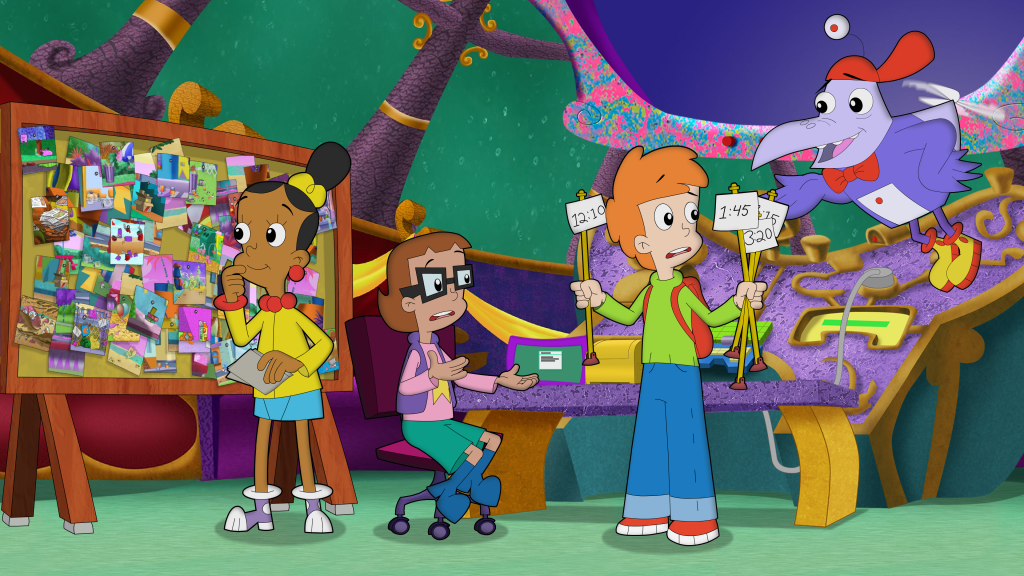 It’s math and citizen science to the rescue in Cyberchase’s new special, “Space Waste Odyssey”! The CyberSquad collects, organizes and analyzes data from citizen scientists to help solve one of Cyberspace’s dirtiest problems yet. Image courtesy of THIRTEEN Productions LLC.

Want to get your little citizen scientists involved in real-life citizen science projects? You can search for projects by age group on the SciStarter project finder. You can do many projects, like the GLOBE Observer: Mosquito Habitat Mapper, TreeSnap, Stall Catchers, and Project Squirrel, in your backyard or at home. 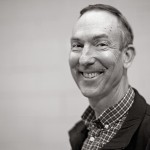 Bob Krech, M.Ed., has over twenty-five years of experience as an elementary math specialist, supervisor, consultant, and advisor for a variety of school districts as well as ETS and Scholastic. He has worked with the Cyberchase team since 2007 and is currently serving as math advisor on broadcast and digital content. He has written twenty-five books for teachers, parents, and students on making math fun and interesting as well as two award-winning children’s books, and has received the Presidential Award for Excellence in Mathematics and Science Teaching for Elementary Math. 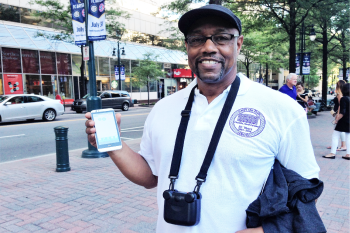 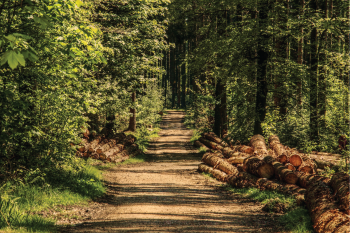 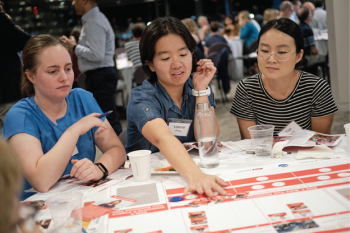 The SciencesBoston Could Become WICKED Hot. This is What They’re Doing About it. 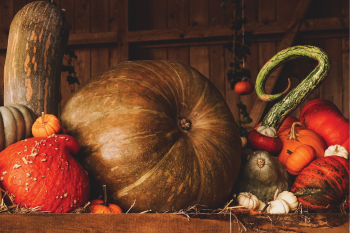 The Sciences6 Ways to Dive Into the Science of Thanksgiving