Pictures of and from the Mars Curiosity rover after its first week on the Red Planet. 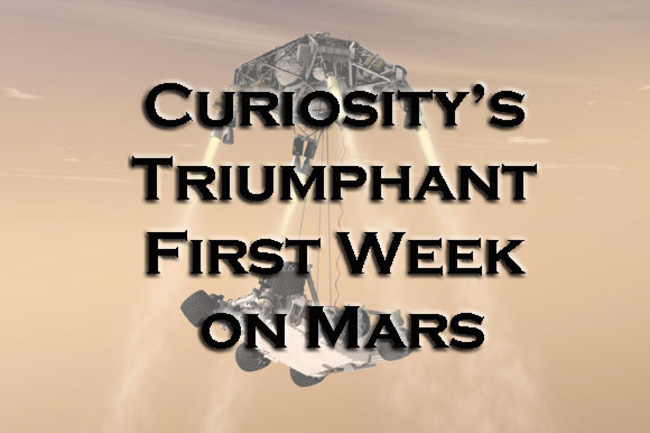 On August 6, 2012, at 05:17 UTC, the Mars Science Laboratory - nicknamed Curiosity - touched down on the surface of the Red Planet. It is by far the largest and most ambitious scientific lab sent to Mars - it has a mass of nearly a ton, and carries an armada of detectors to investigate its environment. It will roam the area around the 150-kilometer-wide Gale crater, inspecting the region's geography and peering into its history. Curiosity's purpose: to see if Mars was once or is now potentially habitable.

Curiosity will poke and prod the landscape for at least two Earth years - about one Martian year. It just completed its first week on the planet, and has already returned amazing images. In this gallery are pictures taken by the rover on the surface as well as incredible shots of it as seen from orbit. These pictures are just a few of my favorites - you can find hundreds, thousands more at the NASA MSL images archive. 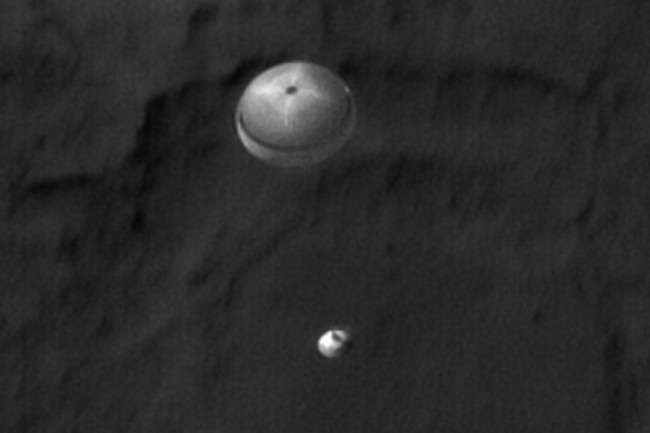 An incredible shot, and a triumph of human engineering: the package containing the rover descending to the surface of Mars via parachute, as seen by the HiRISE camera on the Mars Reconnaissance Orbiter.

Wrap your brain around this: here is a picture taken by a machine orbiting another planet, reprogrammed by engineers and scientists hundreds of millions of kilometers away using math and science pioneered centuries ago, so that it could catch the fleeting view of another machine we humans flung across space, traveling hundreds of million of kilometers to another world at mind-bending speeds, only to gently – and perfectly – touch down on the surface mere minutes later. 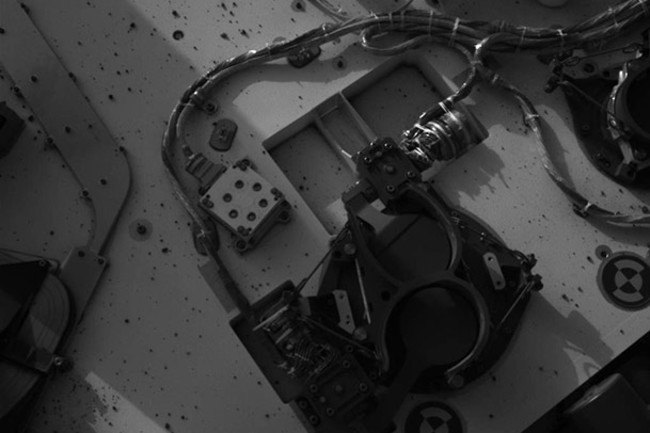 The landing of the rover was picture perfect... almost. Scientists and engineers were surprised to see quite a bit of rocky debris on the top of the rover, clearly blown up by the rocket exhaust by the sky crane as it hovered over the surface. They weren't expecting quite this much material, but after analyzing the images like this one, taken by the right navigational camera, they've determined it won't interfere with the rover operations. 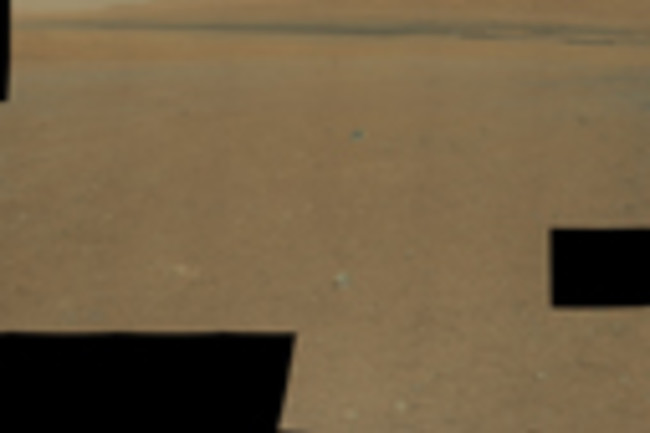 This picture may look tiny and lacking in details, but that's only because I shrank the original down to fit the blog: this is actually a mammoth 10,000 x 5900 pixel panorama of the Martian surface! It's composed of 79 of the 1200 x 1200 Mastcam high-res pictures taken of the surrounding landscape - there are 130 of these pictures taken in total, but at this time not all of them have been sent back to Earth. The black areas are where we're still awaiting the data.

This image needs to be seen in full resolution to be believed. It's incredible. The rover in the immediate foreground, the flat plain with countless scattered rocks, the rim of Gale crater in the background... Mars is an alien planet, a dry, inhospitable, lonely one, and this picture drives that point home. 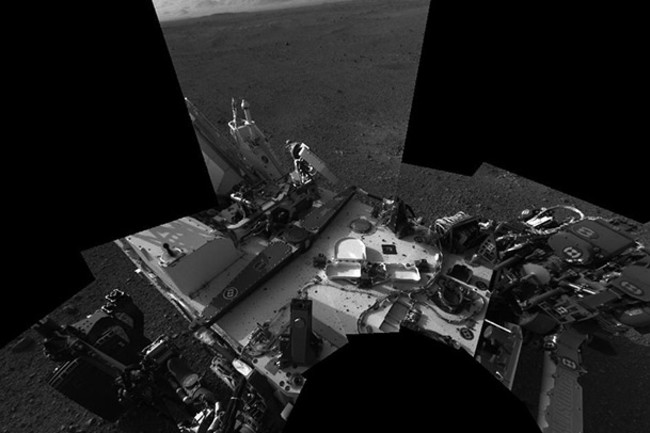 This self-portrait of Curiosity was made by taking 8 images from the navigation cameras and stitching them together. The back of the rover is on the left (part of the big power source - the radioisotope thermoelectric generator - that will keep the rover alive for its two-year mission - is sticking up at an angle out the back). You can see the surface of Mars, and then, at the top, the mountainous rim wall of Gale crater, Curiosity's new home. 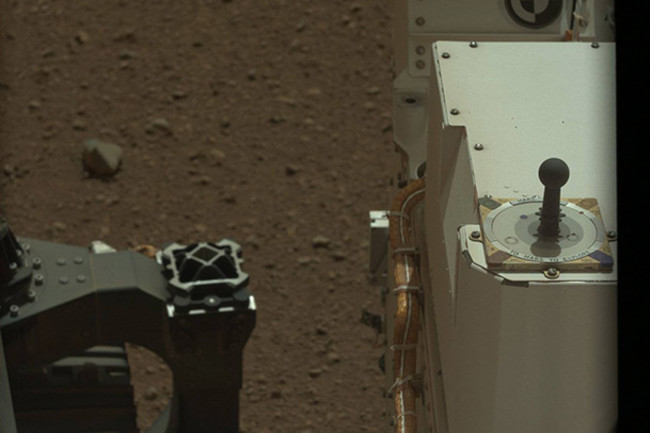 Mounted on top of the rover is probably the last thing you'd expect: a sundial! It's not to tell time, but color. Taking color pictures isn't all that easy; you have to know a lot about the way the camera works as well as lighting conditions. Things are very different on Mars, so the sundial has color stripes on it - red, blue, green, and yellow - to help calibrate the cameras. The gnomon - the part of the sundial that casts the shadow - is needed so that scientists back home on Earth can see how lighting changes from full illumination to shadow.

The sundial is inscribed with the words, "Mars 2012 - To Mars - To Explore", and has the word "Mars" written around it in 16 different languages. 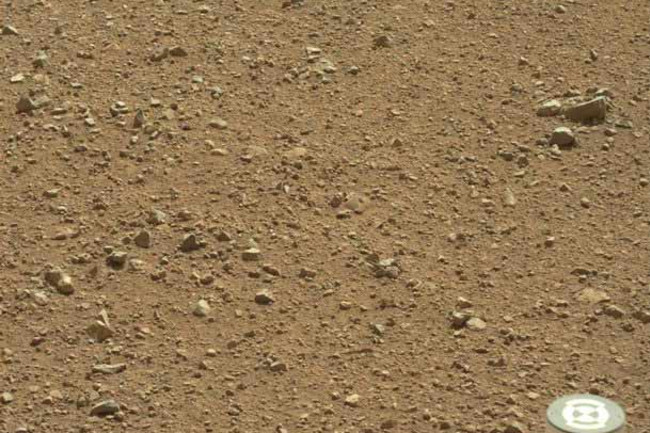 This picture - taken just after Curiosity started its third day on Mars - is perhaps my favorite of all. Indulge me for a moment...

This patch of ground looks mundane, doesn't it? If I showed you this picture with no prep, no comment, you wouldn't give it a second glance.

But that's the amazing part! Gale crater, Curiosity's new home, formed more than 3 billion years ago when an asteroid slammed into Mars at tremendous speed. The asteroid itself was probably substantially larger than the one that wiped out the dinosaurs 65 million years ago here on Earth. The rocks in this picture were created much later, broken up by slow erosive forces over eons of time.

At some later point water flowed here, picking up and sorting through the rocks and pebbles and sand, then far more recently the literally rusty dust ubiquitous on Mars - and which gives it its nickname of the Red Planet - blew over and stuck to their surfaces.

That last part sounds familiar to me. After all, I've seen similar rocks and sand in dry lake beds in Arizona, New Mexico, and my home state of Colorado, formed in the same way and also coated with red dust. At a glance they'd be hard to tell apart from the rocks seen here.

But this is a picture of Mars! A planet that has a vastly different history, geology, structure, and environment than our own warm, blue planet.

... or does it? The whole point here is to study Mars, discover its secrets, unravel its past. And the point of that is, in no small part, to better understand our own world. How are they different, how are they the same? What does this tell us about home?

Looking at this picture we are seeing up close a place so far away it's merely a brilliant red dot to our eyes. But it's a planet, with as rich and wonderful a history as our own. And we have reached out with our science and our wonder and our imagination, and we have touched the surface of this alien world so that we may better understand our own.

Being curious is the best thing we can do, and Curiosity shows that it is the best of us. 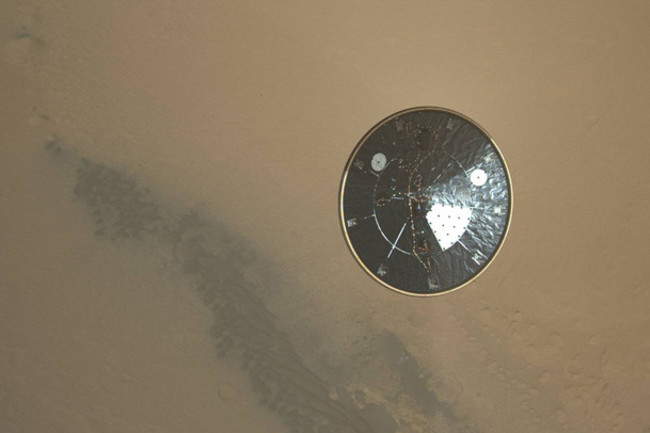 A heat shield underneath the rover package protected the lander from the heat and pressure of atmospheric entry as it plowed through the Martian air at thousands of kilometers per hour. Once the space probe had slowed enough, the heat shield was ejected, exposing the rover underneath. The Mars Descent Imager on the rover captured this astonishing shot of the heat shield a few seconds after it was ejected, and still only a few meters away. The shield then fell to the ground, impacting the surface of Mars just a few hundred meters from the landing site itself. 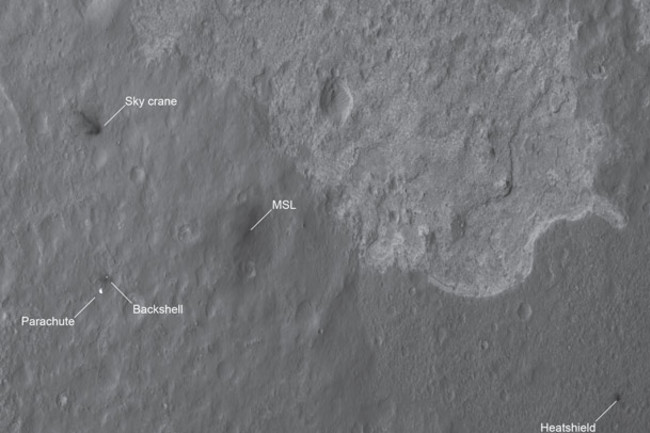 The HiRISE camera on Mars Reconnaissance Orbiter captured this shot of the Curiosity hardware scattered across the surface of Mars. Hopefully NASA won't be fined for littering.

[See next image for close-ups of all the hardware.] 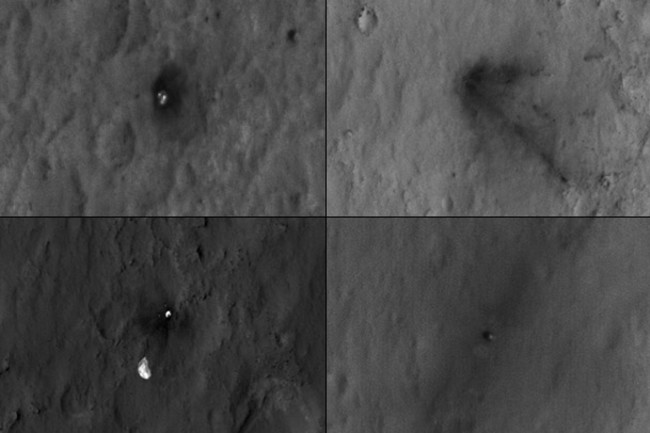 The HiRISE camera can see Martian objects smaller than a meter, and was able to spot the hardware that the rover needed to land safely on the surface (click the links to see them in higher-res):

Upper left: The heat shield ejected after safely protecting the whole lander package in its initial descent through the atmosphere.

Upper right: The splash pattern from the sky crane; the rocket-powered crane that hovered over the Martian surface, lowered the rover to the ground, then blasted away. The crane itself can be seen as a dot in the full-res picture.

Lower left: The parachute (lower left) and the back shell that attached it to the lander package. The parachute slowed the rover and sky crane from super- to sub-sonic speeds.

Lower right: The rover itself, barely resolved, but proof that humans are once again by proxy on the surface of another world. 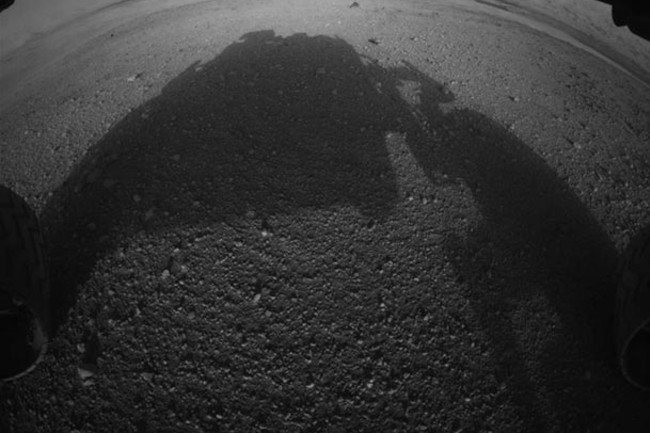 Curiosity landed near the edge of the 150-kilometer-wide Gale crater, which, like most large craters, has a central mountain. Rising 5.5 kilometers (nearly 3.5 miles) above the crater floor is Aeolis Mons, popularly called Mount Sharp. It can be seen towering in the distance in this (wide-angle) picture, taken less than an hour after Curiosity touched down. The rover's shadow is obvious as well, cast on the flat surface strewn with small rocks. 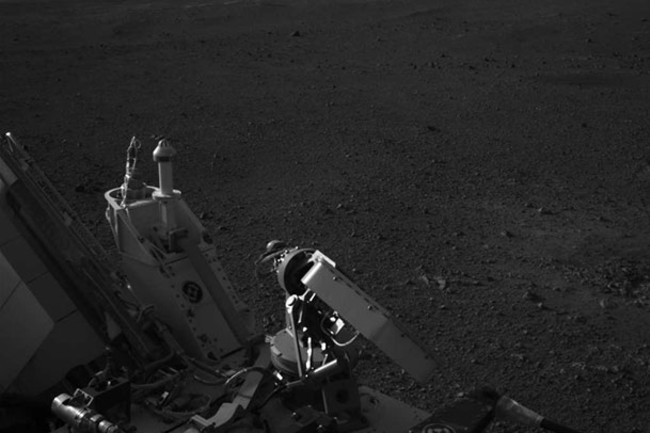 This is one of my favorite images from Curiosity so far: a shot by one of its navigation cameras showing the distant rim of Gale crater. It's several kilometers away, and looks for all the world - all the worlds - like a mountain range. I see very similar-looking hills when I ride my bike north of my home in Boulder, Colorado! But not even our air is as thin and dry as that on Mars.

In the foreground is of course the rover itself, and the crater floor reaches into the distance, covered in loose pebbles. 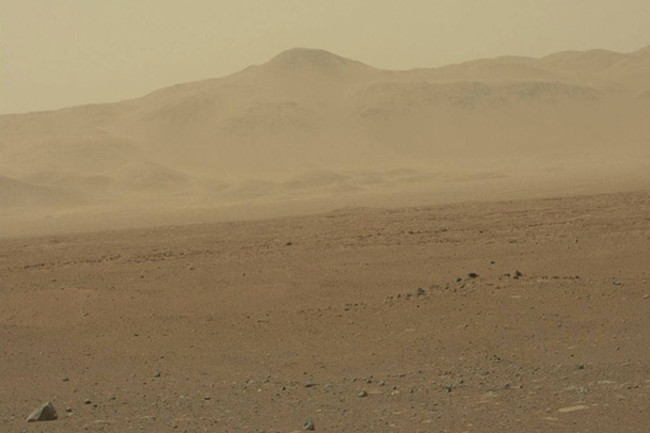 This is a closer view of the crater rim seen in the previous picture. 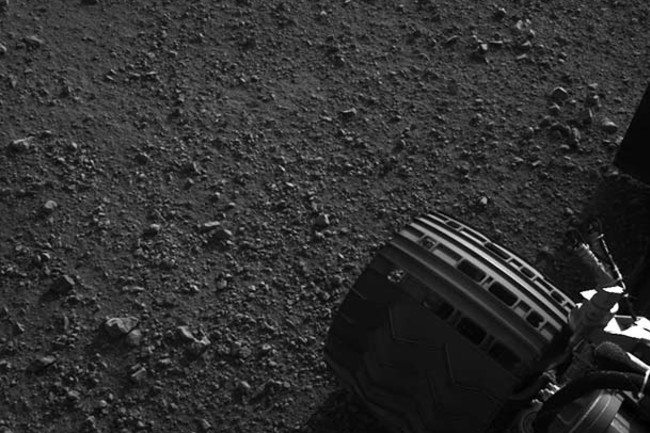 What may be an iconic shot: wheels down on Mars. Taken on the second full day of operations on Mars, the left navigation camera took this lovely picture of one of the rover's six wheels resting on the Martian surface. The rocks are small, a few centimeters in size or less (for comparison, the wheel is about 50 cm (19 inches) in diameter), and distributed in such a way that is consistent with flowing water having sorted them. 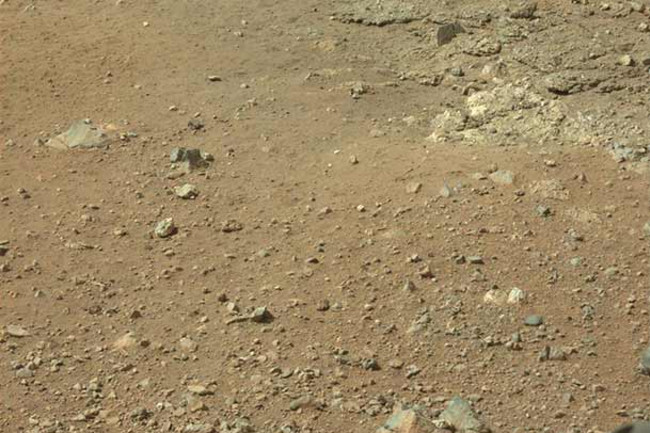 The surface of Mars is largely gray basaltic rock, much of it covered with a fine layer of red dust that gives the planet its ruddy hue. As the sky crane lowered the rover down, in some spots the exhaust from the rockets blew around the dust and sand from eroded rock, exposing the bedrock underneath. This plot of ground near the rover shows that very well! In the upper right you can see the surface is discolored (the blue-gray basalt poking through), and the material blown around a bit. The bedrock is the flattish looking structure, with one flat-surfaced piece sticking up a few centimeters. Curiosity is designed to look at the geology of the region, and it gets this science for free just for landing there and blowing things around a bit.