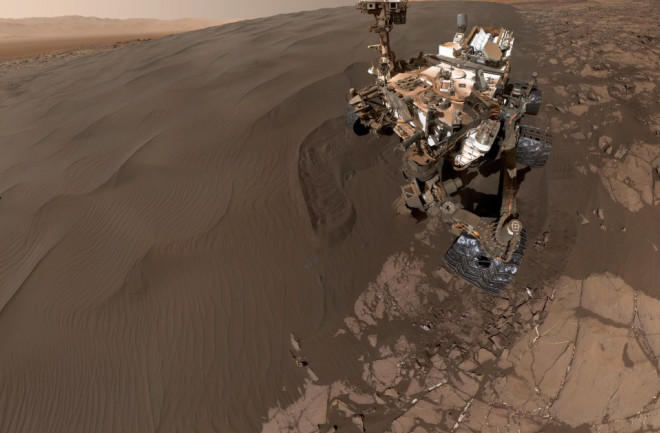 Self portrait: Curiosity Mars rover. (Source: NASA/JPL-Caltech/MSSS) The Curiosity Mars rover took this selfie — actually, 57 of them stitched into one mosaic — as it was exploring a feature on the Red Planet known as the "Namib Dune." The rover used its Mars Hand Lens Imager, or MAHLI, instrument at the end of its robotic arm to snap the images on Jan. 19, 2016, during the 1,228th Martian day, or sol, of its work on Mars. (A Mars solar day has a mean period of 24 hours 39 minutes 35.244 seconds.) This is the sixth such self portrait for Curiosity. But as luck would have it, I had never seen one of these before. So for me, this was a totally fresh perspective. My second reaction (after, "A rippled dune on Mars! I want to go!) was puzzlement: How did the rover produce a stand-off selfie like this without its robotic arm getting into the image? Curiosity certainly did not set up a camera on a tripod, hit the self-timer button, and then back up for the portrait. I'll get to the answer in a minute. But first, take a close look at this beautiful image. Make sure to click on it, and then click on it again to enlarge it. Check out the stunning details, including some damage to one of the rover's wheels — which for scale are 20 inches in diameter and about 16 inches wide. (The wheels actually have developed punctures, tears and other signs of damage, but Curiosity manages to soldier on...) And have a look around the dune, and the surrounding landscape. Nope, this isn't Wadi Rum in Jordan. This is the real deal, and for me the image made me feel as if I was almost at the edge of that dune and scuffing my boots in the dark sand. That's precisely what Curiosity did — with its wheels, not a boot, of course. (See the wheel marks?) It also sampled the sand and performed a variety of lab analyses on it.

Martian sand — close enough to run your fingers through it... (Source: NASA / JPL / MSSS) The image above is the highest-resolution photo that MAHLI has taken since Curiosity landed on Mars on Aug. 5, 2012 PDT. It was acquired on Feb. 2, 2016 (sol 1241) with the imager's window just 24.8 millimeters away. That's a little shy of an inch. Protective prongs on the imager were even closer — just 5.8 millimeters away from the sand, or a little less than a quarter of an inch. Think about that for a minute. Engineers on Earth were able to delicately ease a camera at the end of a spacecraft's robotic arm to within a quarter inch of the surface of a planet millions of miles away. Outstanding! https://youtu.be/ME_T4B1rxCg While we're on the subject of 'Outstanding!', you should also check out this incredible 360-degree view acquired by Curiosity at the Namib Dune. Use the arrows in the top left, or click and drag your cursor or mouse, to move the view up/down and right/left. The Namib Dune is part of the dark "Bagnold Dunes" field along the northwestern flank of Mount Sharp. Dunes here move as much as about 3 feet per Earth year.

The Curiosity rover's six selfies. (Source: NASA / JPL / MSSS / Thomas Appéré) So, back to the selfies... How does Curiosity do it? How does it produce a selfie from multiple images without its robotic arm sticking out in front of it? Here's how NASA explains it:

Wrist motions and turret rotations on the arm allowed MAHLI to acquire the mosaic's component images. The arm was positioned out of the shot in the images, or portions of images, that were used in this mosaic.

And here's a video showing how it's done: https://youtu.be/9V3_zMD_S9c For a detailed explanation of Curiosity's sampling activities at Namib Dune, including the feat of jockeying the MAHLI instrument so close to the Martian surface, I highly recommend that you check out this post by Emily Lakdawalla at her Planetary Society blog.