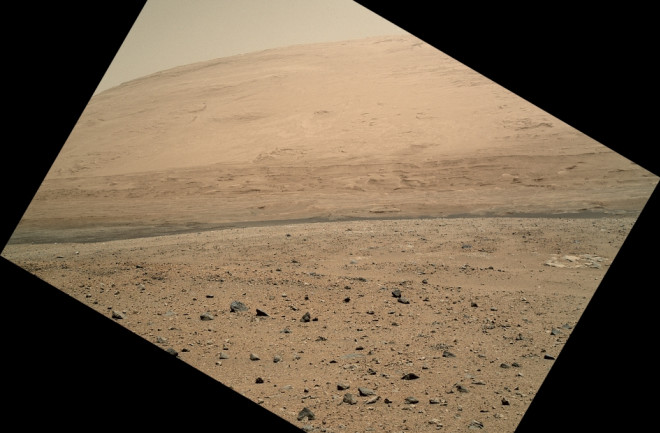 Believe it or not, this soil contains 2% H20. Now that's a tall drink of water! Image credit: NASA. Curiosity's high-tech divining has shown that the Red Planet's dirt is not as dry as it appears. Chemical analyses of soil samples on Mars have determined that the surface is actually about two percent water by weight. Although Curiosity's predecessors in 2004 gave evidence of ancient water on Mars, it was far too acidic for consumption. This time around, the water is much more human-friendly. The surface was once much wetter than it is today, but there's still enough for us to prime the pump of a potential future habitation. Because Curiosity extracted the water from surface soil that has swirled across the planet's surface, it suggests that such water content is readily available all over Mars. As leading author Laurie Leshin said to CBS,

"When we send people, they could scoop up the soil anywhere on the surface, heat it just a bit, and obtain water," Leshin said.

Every cubic foot of heated dirt could yield a couple pints of water. That's good news for those people that consider Mars a future human outpost. One of the major challenges of sustaining human life on Mars would be having enough H20. Now it sounds like all we'd need is a heater, but hopefully not one as hot as Curiosity's, which desiccated the samples at a staggering 1535° F (835° C). In addition to water, the soil sample contained sulphur dioxide, carbon dioxide, oxygen and a toxic chemical the researchers think is perchlorate. Leshin explained to the BBC,

"If the water was the good news for the astronauts, this is the bad news. Perchlorate actually interferes with thyroid function, so it could be a problem if humans were to ingest some of the fine dust on Mars."

Finding water on Mars is the first step in a long journey toward determining if Mars supported lifein the past, and determining what steps we need to take to make it habitable in the future. The water finding is one in a series of five papers published in Science Thursday giving all the juicy---er, watery---details.