Cultural Relics From the Space Race Rescued From the Trash 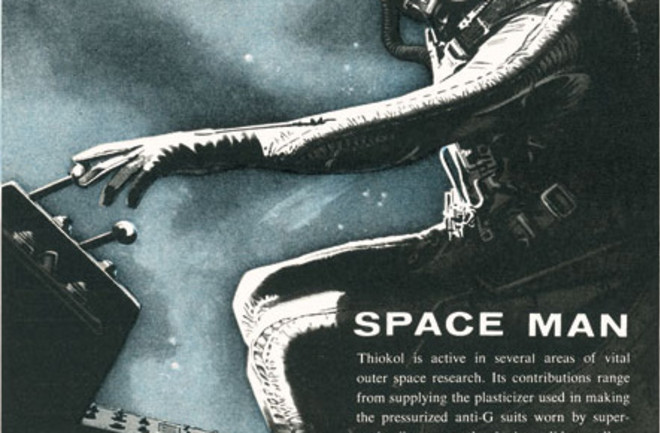 What is garbage to one is gold to another. The juicy new title by Blast Books, “Another Science Fiction” is proof. Incredibly, most of the images in this book came from discards from several libraries that were rescued by author and space history buff Megan Prelinger for her library in San Fransico, Prelinger Library. When Prelinger came across these images in magazines (like Aviation Week and Missiles and Rockets) that the Houston public library was throwing away, she was smitten. The book featuring these advertisements from the early space-race years followed.

Prelinger told me how she found featured artist Willi Baum: “He signed his paintings "W. Baum" and for three years I couldn't find him because I didn't know his first name. I finally found a reference to him in a commercial art annual from '62 that listed his full name. I then found that he lives just five miles away from me. I wrote to him, he wrote back the next day, and we became good friends. That's quite a contrast to my searches for every other artist. Most were not contractually permitted to put signatures on paintings. So they have vanished from the record. Others were deceased.”