I hate to break form in my usual titling of these posts, but I couldn't resist this one. Think of it as Guppeidolia, or Pareitilapia, if that makes you happier. 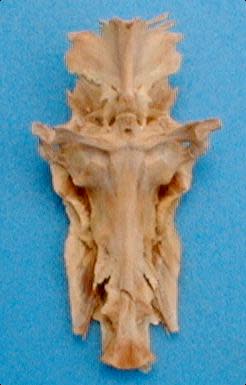 Whatever you call it, it's, well, it's Jesus on the cross. Inside a fish. Specifically, the skull of a catfish, and even more specifically the Gafftopsail catfish. If you go to that website, that info is actually a bit hard to find, because the site is, um, well. Go there and you'll see. Of course, the guy is selling these fish skulls, but says he'll donate some of the proceeds to charity, which is nice. Like a lot of religious pareidolia practitioners, he does make some unusual claims, such as (layout and caps are all his):

I looked around my room but saw no apparitions. Maybe I'm not looking hard enough. I haven't studied all the grain in my desk, or the fiber patterns in my carpet. Maybe I missed it. I think this guy is sincere in his beliefs. I also think he's wrong. While the bone does look like a cross, and even a guy on a cross, what we're really seeing here is the convergence of two paths of evolution: one that shaped the fish skull this way, and the other that shaped our brains to interpret shapes into patterns that aren't really there. But then, isn't all art pareidolia? You're not really seeing a woman smiling in the Mona Lisa: it's just paint. David is just scratches and curves in rock. But then, no one thinks those really are what they represent; the art is in the representation. So, the conclusion I come to? Sometimes a cigar fish is just a cigar fish.