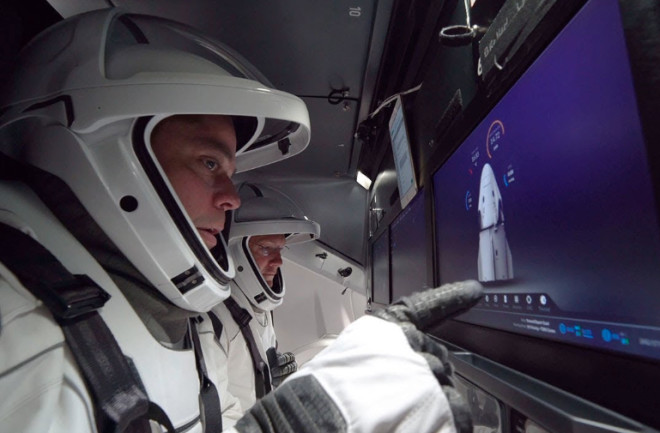 Astronauts in SpaceX's Crew Dragon capsule will have a decidedly high-tech experience compared to their Apollo forebears 50 years ago. (Credit: SpaceX) Now that SpaceX’s Crew Dragon capsule has successfully landed back on Earth and completed its first full test flight, dubbed Demo-1, Elon Musk's rocket company must quickly turn its gaze to the next tests on its journey to put humans in space. SpaceX launched early on March 2, docked with the International Space Station, and returned home Friday morning, splashing down in the Atlantic Ocean at 8:45 a.m. EST. While SpaceX has flown many missions to the ISS with its cargo Dragon vehicle, Crew Dragon is a much different space ship. It has its own systems for safety, docking, and landing that just saw their first tests during a true mission. Both NASA and SpaceX will now start the tedious task of reviewing all the data collected during this Demo-1 mission, which by all accounts went smoothly.

Steve Stich, Deputy Manager for NASA’s Commercial Crew Program, said during a post-landing appearance on NASA TV that, “I don’t think we saw really anything in the mission so far – and we need to do the data review -- that would preclude us having the crewed mission later this year.” That’s good news for SpaceX, which is already building the capsule that will fly in their Demo-2 mission slated for July. That flight will carry two NASA astronauts, Bob Behnken and Doug Hurley, to the ISS, and then return them to Earth. If that mission also succeeds, then SpaceX should be certified to carry astronauts back and forth to the station on a regular basis. That in turn is excellent news for NASA, which has been buying seats on Russian Soyuz rockets since the end of the shuttle program in 2011. The Soyuz seats topped out at $82 million per person in 2015. In addition to SpaceX’s test flights, Boeing has the uncrewed test flight of their Starliner crew-capable ship scheduled for April, with their own flight-abort and crewed tests coming later in the year. NASA’s timeline hopes that they will have two American companies launching from American soil to replace their Soyuz contract before the end of the year. Technically, that contract expires in April. But NASA may be purchasing two more seats to cover the interim period this year, which could stretch access to early 2020. NASA's Aerospace Safety Advisory Panel has stressed that they don't want NASA to be in a position where their lack of access to the ISS is driving their evaluation of whether SpaceX and Boeing are fit to safely fly astronauts.

A recovery ship hoists SpaceX's Crew Dragon capsule out of the Atlantic Ocean on Friday, March 8, after its successful splash down. (NASA) But there’s still a lot of work to be done before SpaceX is certified. Even before the July flight, Crew Dragon’s abort procedures will undergo a full test. SpaceX plans to re-use the capsule that landed today for their in-flight abort test. This means launching the spacecraft and then aborting it mid-flight to land safely again. The capsule that flew over the past week had the necessary systems on board for such an abort. And sometime in June, SpaceX will actually test them in action. Mostly this means firing the Super Draco thrusters that are new to Crew Dragon and making sure they can safely bring humans back to the ground in case of any mishap during launch. On October 11, 2018, just such a mishap occurred with a Soyuz rocket meant to ferry NASA astronaut Nick Hague and Russian cosmonaut Alexey Ovchinin to the ISS. In that case, a booster failed to separate normally. The crew capsule detached and fired its thrusters to get away from the booster, then parachuted to ground. Neither crewmember was harmed, and Soyuz was back in action by December. Hague and Ovchinin are due to board another Soyuz capsule on March 14 to make their delayed trip to space. Their successful but harrowing experience shows that even experienced spacecraft need backup plans. NASA and SpaceX will also be reviewing the data collected by Ripley, the dummy who rode inside the crew capsule. Its sensors mostly focused on acceleration forces during launch and re-entry, to make sure astronauts will be comfortable when it’s their turn to be the passengers. Mike Hopkins, a NASA astronaut slated to fly on the first true SpaceX mission after certification, said in a post-landing appearance that he was “very anxious” to see what Ripley’s sensors had to say about the test flight. Musk did say that even as Crew Dragon streaked through the atmosphere, their sensors showed the spacecraft stayed right around normal room temperature inside. Also, while future crewed missions will splash down closer to land and have only a few hours of travel time, Demo-1's recovery took the ship some 30 hours to return to Cape Canaveral and deposit Dragon to its waiting handlers. By then, the celebrations will be over, and the next round of work can begin.