I deal with superginormously ridiculous energies, velocities, and sizes all the time as an astronomer. You get used to it after a while... then something like this'll slap you upside the head: a star that exploded more than 5000 years ago launched two epic bullets. One is a cloud of gas screaming away at thousands of kilometers per second, and the other is the cinder of the star itself, an octillion-ton cannonball blasting through space in a totally different direction. 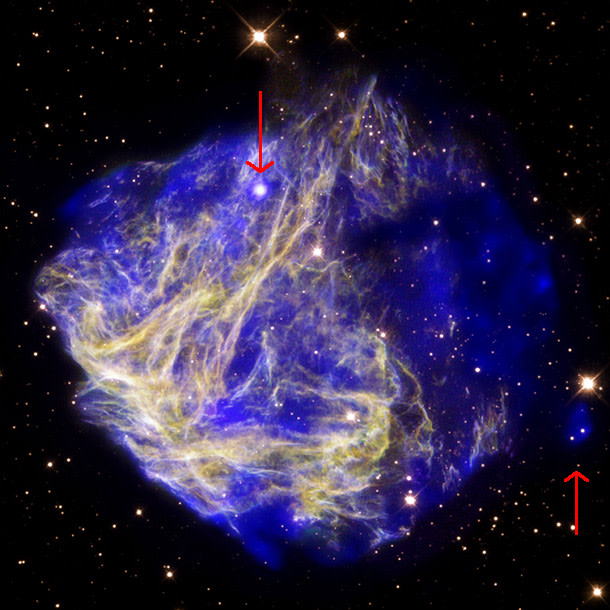 This is a composite picture of the supernova remnant N49: an expanding lumpy sphere of gas about 30 light years across (300 trillion kilometers, or 180 trillion miles)*, located in the Large Magellanic Cloud, a satellite galaxy to our Milky Way. The blue in the picture is the emission from gas heated to millions of degrees, and shows X-rays detected by the Chandra observatory. The yellow and purple are from Hubble data, showing gas being whipped and beaten by shock waves slamming around insides the remnant. Turn your attention to the little blue blob to the right, marked by the red arrow. It's outside the main bubble of the nebula, meaning that it must be moving faster than the gas in general. This is seen sometimes in supernovae remnants: a bullet or focused blob of gas screaming away. It may be caused by magnetic fields in the expanding gas just after the star explodes, launching the octillions of tons of matter away in all directions, or it may be due to focusing from shock waves, which can sculpt the gas and create little pockets of denser knots. Either way, this bullet is moving away from the nebula at speeds of more than 2200 km/sec (1300 miles per second) -- fast enough to cross the United States in less than 3 seconds. The mass of the blob is unclear, but to give you an idea of the energies involved, it emits 10 times the Sun's total energy in just X-rays alone. Incredible. Now focus your attention to the star-like point source indicated by the other red arrow, near the top of the remnant. The astronomers took a good look at that object, which was previously known to be an object called SGR 0526−66. SGR stands for Soft Gamma ray Repeater, an object that periodically blasts out flashes of super-high-energy gamma rays. SGRs are neutron stars, the ultra-compact and überdense (I know, I'm running out of adjectives.. but just you wait...) leftover cores of stars that have exploded. They can have more than the mass of the Sun compressed down into a ball just a few kilometers across! A cubic centimeter of neutron star material (usually called neutronium, a word I love love love) weighs about as much as the combined weight of all the cars in the United States. So there's that. The astronomers found the age of the SGR to be a few thousand years, which matches the age of the nebula! That means it's very likely this is the leftover core of the star that exploded and created N49 itself. But what's it doing way off center? Astronomers think that sometimes the explosion can be off-center in the star, so that things don't quite expand the same in all directions. Given the energies involved (hint: a LOT) this can give the neutron star a kick, sending it caroming through space at high velocity. If SGR 0526-66 is indeed the leftover cinder from the explosion, to get where it is in the time since the explosion it has to be moving at a velocity of at least 790 km/sec (490 miles/second). Think about that: this is an object with the mass of the Sun and it got kicked so hard it went shooting off hundreds of times faster than a rifle bullet. Yeah, you might want to sit for a moment and soak that in. It gets worse! Since it's seen in the Chandra data, that means it's hot. Glowing at several million degrees, the energy it gives off in just X-rays is a hundred times the Sun's total energy production! If you replaced the Sun with SGR 0526-66, you'd barely be able to see it since it's so small, but it would hardly matter: the X-rays it gives off would cook the Earth like a marshmallow in a furnace. If that's not enough awesome for you, the magnetic field at the surface of the neutron star is about 100 trillion times stronger than the Earth's! Neutron stars are small in stature, but nothing else about them is. Studying supernovae remnants is interesting scientifically for lots of reasons, not the least of which is that they create the heavy elements in the Universe, so we literally owe our lives to them. That would be enough... but I know that secretly, astronomers study them because they are simply so frakkin' cool. Or maybe it's not so secret.

^* A lot of these remnants look like mammograms to me. Make of that what you will.