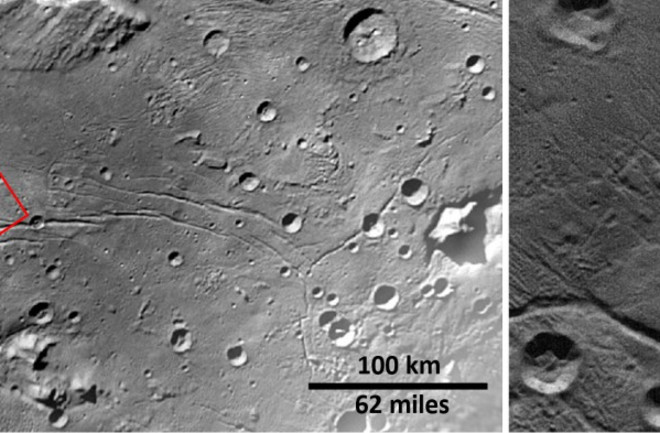 Craters on Pluto and Charon only get so small, pointing to new information about the Kuiper Belt. (Credit: NASA/JHU-APL/SWRI/K. Singer) When New Horizons flew past Pluto and its moon Charon in 2015, it took a lot of pictures. From studying those images, scientists have recently realized that while both bodies are covered in craters, almost none of those craters are small, meaning there may not be many small bodies around to smash into them. This changes astronomers’ views of the Kuiper Belt, the region of small – but apparently not too small – rocky and icy bodies of which Pluto is a part.

Astronomers looked at images taken from all over Pluto and Charon, but focused their most detailed investigations on Charon’s Vulcan Planitia, a broad plain that was resurfaced early in Charon’s history. The smooth icy surface makes it easy to count craters, though researchers point out that they get similar – if less clear – results from other regions on Charon and Pluto. They found that while there are plenty of large and medium-sized craters, there are hardly any smaller than 8 miles across. Since the size of the crater depends largely on how big the impactor was, this points to a lack of impactors smaller than about 1 mile across. Of course, smaller craters could simply be erased over time. But Kelsi Singer, lead author of the research published February 28 in Science, says that doesn’t appear to be the case here. “There’s nothing we know of that could erase a 10-kilometer crater, but do nothing to an 11 kilometer crater,” she says. “You would see the bigger one at least partially eaten. And we don’t see anything that’s partially filled in.” This led her team to assume that the small craters were never there to begin with. This was a surprise because originally, astronomers assumed the Kuiper Belt would look much like the asteroid belt that orbits between Mars and Jupiter. Because it’s much closer, astronomers understand the asteroid belt better, and know that it has many smaller objects within its bounds. Many of these tiny asteroids form when larger asteroids hit each other, breaking into smaller pieces. The Kuiper Belt is much farther away, which makes it harder to observe directly with telescopes. The impact histories of some moons of Jupiter and Saturn had hinted at this lack of small bodies in the past, but since they have more active surfaces that can erase craters of many sizes, the findings were less clear. Singer and her team think the Kuiper Belt might look different because it’s less active – it crashes into itself less often – preventing the cascade of smaller bodies that the asteroid belt produces. But really, these new observations require more careful observations of the Kuiper Belt itself. New Horizons is still at work, and its recent encounter with Ultima Thule, farther out in the Kuiper Belt, appears to back up Singer’s findings on Pluto and Charon. But more investigations are needed to understand the full story of the Kuiper Belt.