Crater Floor Collapses at Kilauea: What Might Come Next? 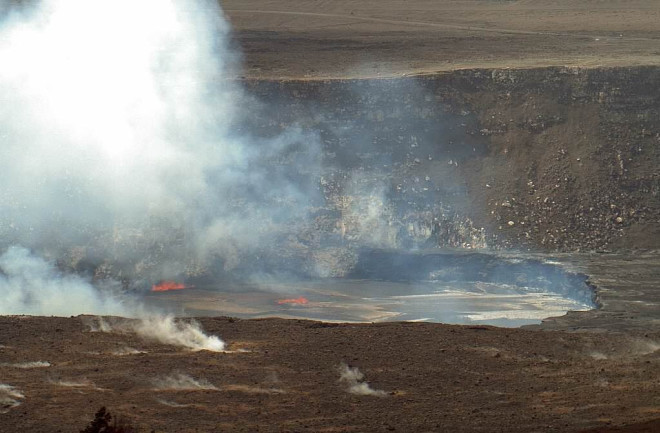 The summit lava lake at Kilauea, seen on April 30, 2018. The lake level had dropped 15 meters over the weekend. USGS/HVO. We've been keeping a close watch on Kilauea over the past couple weeks and now, after weeks of high lava lake levels and inflation, events might be starting to unfold. Yesterday, the crater floor at Pu'u O'o on the East Rift partially collapsed, suggesting that the lava that was filling in below the crater floor was draining away. This came during a bout of increased earthquakes (see below) that began mid-afternoon in Hawaii. Right after the earthquakes started, the webcams pointed at Pu'u O'o saw the floor begin to collapse and that lasted for at least a few hours, punctuated by some small explosions triggered by the collapsing rocks. By the early evening, things had settled down, but no lava was spotted in the floor of Pu'u O'o. Bad weather has obscured a lot of the events of the day, but a helicopter flight is planned for today that could reveal the extent of the collapse and any other changes.

Earthquakes at Kilauea over the past week. The large increase since April 30 is related to the collapse of the floor of the Pu'u O'o crater and inflation on the East Rift zone. USGS/HVO. UPDATE 6:30 PM EDT May 1:Hawaiian officials have closed off the popular Kalapana access to the lava flow field due to the increased chance of eruption in this eastern part of the East Rift zone. Additionally, USGS scientists weren't able to view Pu'u O'o crater today due to ash and poor weather, which they say suggest the explosion and collapse are continuing. The webcam pointed into the Pu'u O'o crater has ash on the lens as well (but clouds filling the crater). Much of the East Rift is now experiencing deformation, apparently all the way out to Highway 130 -- over 30 kilometers (20 miles; see below) to the east! With this concentration of small earthquakes and inflation to the east past Pu'u O'o, that would be the place to expect any new eruption to start. However, in their most recent statement, scientists from the Hawaiian Volcano Observatory make it clear that there is no guarantee that a new eruption on the East Rift zone is in the cards due to this activity.

Map of the East Rift zone on Kilauea, showing Pu'u O'o and Highway 130 to the east. The space between the two is where earthquakes and deformation are currently occurring. USGS/HVO. A potential hint that something was up was noted on the morning of April 30. The summit lava lake in the Halema'uma'u crater was seen for the first time since prior to the weekend (bad weather) and it had dropped 15 meters (~49 feet; see top). With the lava overflows that were happening last week, this suggests that lava was draining from the summit area over the weekend in the subsurface tube system -- and deflation of the summit supported that idea as well. So, the waiting will continue, but watch those webcams to see if something big happens. The sequence of the collapse of the floor at Pu'u O'o and the drop of the lake level at the summit, combined with earthquakes and inflation on the East Rift were all part of the prelude to the 2011 Kamoamoa Fissure eruption ... but time will tell if this is leading to an eruption this time around.