Could Quantum Mechanics Explain the Existence of Spacetime? 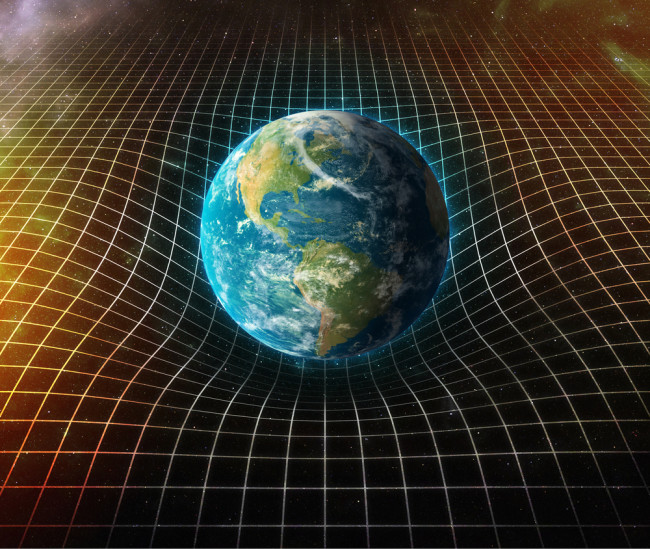 Einstein’s general theory of relativity shows that gravity is the result of a mass, such as a planet or star, warping the geometry of the merger of time and space known as spacetime. (Credit: koya979/Shutterstock) Rod Serling knew all about dimensions. His Twilight Zone was a dimension of imagination, a dimension of sight and sound and mind, a dimension as vast as space and timeless as infinity. It was all very clear except for the space and time part, the dimensions of real life. Serling never explained them. Of course, ever since Einstein, scientists have also been scratching their heads about how to make sense of space and time. Before then, almost everybody thought Isaac Newton had figured it all out. Time “flows equably without relation to anything external,” he declared. Absolute space is also its own thing, “always similar and immovable.” Nothing to see there. Events of physical reality performed independently on a neutral stage where actors strutted and fretted without influencing the rest of the theater. But Einstein’s theories turned Newton’s absolute space and time into a relativistic mash-up — his equations suggested a merged spacetime, a new sort of arena in which the players altered the space of the playing field. It was a physics game changer. No longer did space and time provide a featureless backdrop for matter and energy. Formerly independent and uniform, space and time became inseparable and variable. And as Einstein showed in his general theory of relativity, matter and energy warped the spacetime surrounding them. That simple (hah!) truth explained gravity. Newton’s apparent force of attraction became an illusion perpetrated by spacetime geometry. It was the shape of spacetime that dictated the motion of massive bodies, a symmetric justice since massive bodies determined spacetime’s shape. Verification of Einstein’s spacetime revolution came a century ago, when an eclipse expedition confirmed his general theory’s prime prediction (a precise amount of bending of light passing near the edge of a massive body, in this case the sun). But spacetime remained mysterious. Since it was something rather than nothing, it was natural to wonder where it came from. Now a new revolution is on the verge of answering that question, based on insights from the other great physics surprise of the last century: quantum mechanics. Today’s revolution offers the potential for yet another rewrite of spacetime’s résumé, with the bonus of perhaps explaining why quantum mechanics seems so weird. “Spacetime and gravity must ultimately emerge from something else,” writes physicist Brian Swingle in the 2018 Annual Review of Condensed Matter Physics. Otherwise it’s hard to see how Einstein’s gravity and the math of quantum mechanics can reconcile their longstanding incompatibility. Einstein’s view of gravity as the manifestation of spacetime geometry has been enormously successful. But so also has been quantum mechanics, which describes the machinations of matter and energy on the atomic scale with unerring accuracy. Attempts to find coherent math that accommodates quantum weirdness with geometric gravity, though, have met formidable technical and conceptual roadblocks. At least that has long been so for attempts to understand ordinary spacetime. But clues to a possible path to progress have emerged from the theoretical study of alternate spacetime geometries, thinkable in principle but with unusual properties. One such alternate, known as anti de Sitter space, is weirdly curved and tends to collapse on itself, rather than expanding as the universe we live in does. It wouldn’t be a nice place to live. But as a laboratory for studying theories of quantum gravity, it has a lot to offer. “Quantum gravity is sufficiently rich and confusing that even toy universes can shed enormous light on the physics,” writes Swingle, of the University of Maryland. 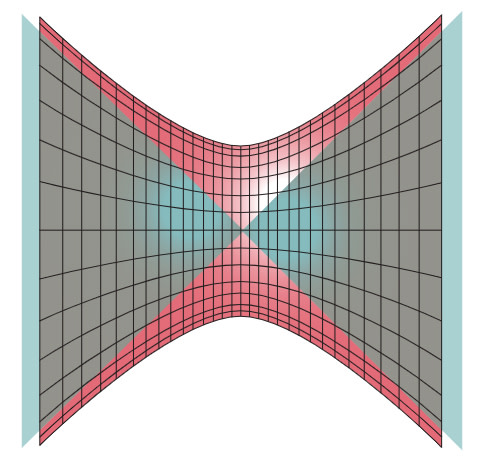 A strange type of spacetime with unusual curvature known as anti de Sitter space, illustrated here, is nothing like the universe we live in, but could nevertheless provide clues to the quantum processes that may be responsible for producing ordinary spacetime. (Credit: U. Moschella/Seminaire Poincare 2005) Studies of anti de Sitter space suggest, for instance, that the math describing gravity (that is, spacetime geometry) can be equivalent to the math of quantum physics in a space of one less dimension. Think of a hologram — a flat, two-dimensional surface that incorporates a three-dimensional image. In a similar way, perhaps the four-dimensional geometry of spacetime could be encoded in the math of quantum physics operating in three-dimensions. Or maybe you need more dimensions — how many dimensions are required is part of the problem to be solved. In any case, investigations along these lines have revealed a surprising possibility: Spacetime itself may be generated by quantum physics, specifically by the baffling phenomenon known as quantum entanglement. As popularly explained, entanglement is a spooky connection linking particles separated even by great distances. If emitted from a common source, such particles remain entangled no matter how far they fly away from each other. If you measure a property (such as spin or polarization) for one of them, you then know what the result of the same measurement would be for the other. But before the measurement, those properties are not already determined, a counterintuitive fact verified by many experiments. It seems like the measurement at one place determines what the measurement will be at another distant location.

That sounds like entangled particles must be able to communicate faster than light. Otherwise it’s impossible to imagine how one of them could know what was happening to the other across a vast spacetime expanse. But they actually don’t send any message at all. So how do entangled particles transcend the spacetime gulf separating them? Perhaps the answer is they don’t have to — because entanglement doesn’t happen in spacetime. Entanglement creates spacetime.

At least that’s the proposal that current research in toy universes has inspired. “The emergence of spacetime and gravity is a mysterious phenomenon of quantum many-body physics that we would like to understand,” Swingle suggests in his Annual Review paper. Vigorous effort by several top-flight physicists has produced theoretical evidence that networks of entangled quantum states weave the spacetime fabric. These quantum states are often described as “qubits” — bits of quantum information (like ordinary computer bits, but existing in a mix of 1 and 0, not simply either 1 or 0). Entangled qubits create networks with geometry in space with an extra dimension beyond the number of dimensions that the qubits live in. So the quantum physics of qubits can then be equated to the geometry of a space with an extra dimension. Best of all, the geometry created by the entangled qubits may very well obey the equations from Einstein’s general relativity that describe motion due to gravity — at least the latest research points in that direction. “Apparently, a geometry with the right properties built from entanglement has to obey the gravitational equations of motion,” Swingle writes. “This result further justifies the claim that spacetime arises from entanglement.” Still, it remains to be shown that the clues found in toy universes with extra dimensions will lead to the true story for the ordinary spacetime in which real physicists strut and fret. Nobody really knows exactly what quantum processes in the real world would be responsible for weaving spacetime’s fabric. Maybe some of the assumptions made in calculations so far will turn out to be faulty. But it could be that physics is on the brink of peering more deeply into nature’s foundations than ever before, into an existence containing previously unknown dimensions of space and time (or sight and sound) that might end up making The Twilight Zone into Reality TV.

Tom Siegfried is a science writer and editor in the Washington, DC, area. He writes the Context blog for Science News and his book about the history of the multiverse will be published in September.