Could Jupiter's Interior Ever Be Filled?

Comets, meteors and other space rocks have been colliding with planets for billions of years. Is there a limit? 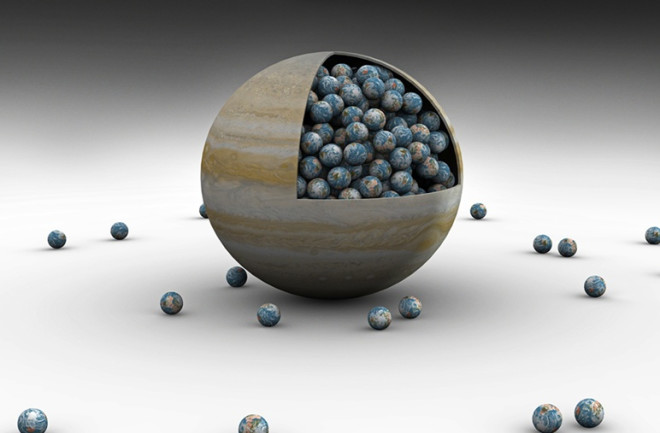 More than 1,000 Earths could fit inside jupiter, but could space rocks ever fill it up? Mark Garlick/Science Photo Library

Q: Comets, meteors and other space rocks have been colliding with the planets forever. Could the interior of Jupiter eventually be filled in so the rocks and other junk become visible?

A: Although it would be cool to see space rocks poking out of Jupiter’s deep atmosphere like islands from an ocean, it’s not going to happen. Countless asteroids and comets have indeed plowed into Jupiter, the solar system’s biggest planet, for billions of years. Yet the sheer volume of this mostly gaseous world ensures that it won’t ever fill up. It’s really huge: All the other planets, let alone the “leftovers” of meteors, comets and other debris, could fit inside Jupiter’s 343-trillion-cubic-mile volume.

Models of Jupiter’s interior suggest it has a solid core of up to 18 Earth-masses’ worth of rocky material — just about 6 percent of Jupiter’s total mass. The stuff at the core is packed in tightly, too, under atmospheric pressure as much as 40 million times that of the Earth. We’d need a lot more material than what’s in our solar system before anything would start peeking above Jupiter’s cloud tops. Plus, its atmosphere is so thick that asteroids and comets approaching the planet would quickly disintegrate, so there’s just no way to “fill up” the gas giant.