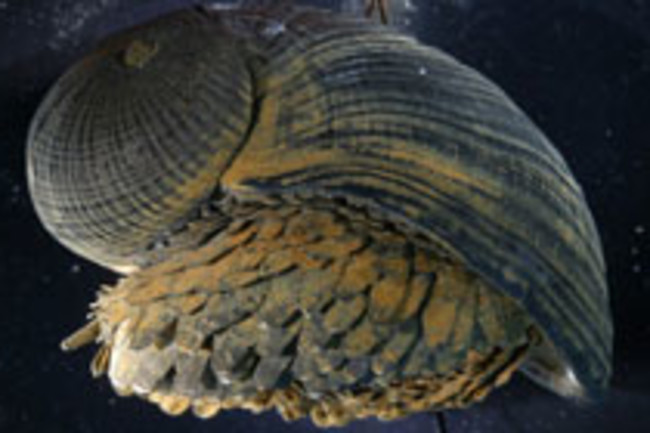 The next generation of bulletproof vests and military armor could well be inspired by a deep-sea snail, say scientists. A team led by materials scientist Christine Ortiz of the Massachusetts Institute of Technology investigated the iron-rich shell of the "scaly foot" mollusk, whose triple-layered shell gives it one of the strongest exoskeletons seen in nature. The researchers believe that copying its microstructure could help in the development of armor for soldiers, tanks, and helicopters. Their work was published (pdf) this week in the Proceedings of the National Academy of Sciences. Scientists were first drawn to this snail in 2003 when they discovered it living in a relatively harsh environment on the floor of the Indian Ocean. It lives near hydrothermal vents that spew hot water--thereby exposing it to fluctuations in temperature as well as high acidity. It also faces attacks from predators like crabs and other snail species. But unlike other snail species, this snail survives because of its thick shell and the different properties of each of its three layers.

The outer layer of the snail's shell is composed of iron sulphides. The scaly-foot snail is the only known animal species that uses iron sulphides as part of its structure. The middle layer is organic and much thicker than the other two. The researchers compare it to the thin protein coating, called the periostracum, seen on the shells of other snail species. The inner layer is composed of aragonite, a calcium mineral found in mollusk shells and corals [CBC].

The design of the shell apparently allows it to deflect attacks by crabs that pick up snails in their claws and squeeze them, sometimes for days at a time, in an attempt to crack their shells. Using a device called an indenter, the researchers applied a force to the shell using a diamond tip. They discovered that the outer shell

is designed to crack in a way that absorbs energy. Cracks spread only by fanning out around the iron sulphide particles. This "microcracking" not only absorbs energy, it also ensures that larger cracks do not form. What’s more, the particles of iron sulphide may blunt and deform intruding claws [The Times of India].

Meanwhile, the thick inner layer seems to absorb the mechanical energy exerted by either an indenter or a crab claw, and may also dissipate heat. Coating armor in iron based nanoparticles that dissipate the energy of a blow by generating microcracks is "largely unexplored in synthetic systems" and particularly promising, said Ortiz. She said helmets, motorbikes, and even Arctic oil pipelines that are buffeted by icebergs could benefit from this study. Ortiz and her team are now looking at a host of natural exoskeletons to study protective design principles, including chitons, urchins, beetles, and armored fish.Related Content: 80beats: Chameleonic Synthetic Opal Could Lead to Full-Color Electronic Paper 80beats: Super-Strong Ceramic Mimics Seashells’ Tough Mother-of-Pearl Coating

DISCOVER: Expedition To The Bottom Of the Deep Blue Sea