Could a Change in the Earth's Spin Lead to More Earthquakes Next Year? 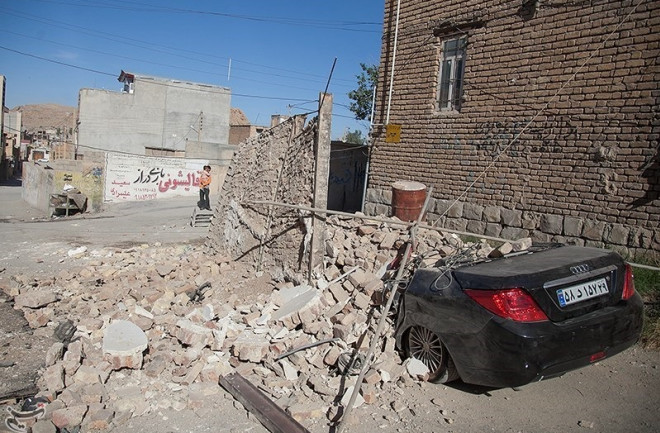 Damage from the November 2017 M7.3 earthquake near the Iran/Iraq border. Farzad Menati / Wikimedia Commons If you've seen the news over the weekend, you might have seen a bevy of article proclaiming that 2018 will see a big surge in M7+ earthquakes. My first reaction was "ugh" and the next was "sigh". I thought that yet again the media was being duped by crackpots trying to sell some snake oil prediction scheme. However, that first pass may have been misguided, but old habits die hard. Instead, this dramatic statement came from a paper in Geophysical Research Letters and an abstract from the Geological Society of America meeting in Seattle. Roger Bilham (Colorado) and Rebecca Bendick (Montana) presented a model that predicts that 2018 will be the opening of a window of potentially higher large earthquake activity due to very, very slight changes in the rate that the Earth spins. Although we never notice it, the Earth's spin does change ever so slightly. Geologists aren't sure what drives this slight variation, but it is likely linked to the Earth's core. The outer core is a layer of molten iron and nickel that is 2,200 kilometers thick and the whole thing is convecting (moving). This is what drives the dynamo that generates the Earth's magnetic field, so you should remember to send that "thank you" note to the outer core. However, small changes in that convection in the mantle could be reflected in slight changes in the rate the Earth spins as well. Just like you might feel that seatbelt pull you in if you hit the brakes (thank you, momentum), if the Earth's spin slows even a little bit, there is a lot of rock with a lot of momentum that slows with it. You can think of it like the whole planet "sloshing" a little bit. That causes a lot of stress to rocks ... and stress added to rocks can lead to earthquakes. However, Bilham and Bendick say that they have found examples where the slight deceleration of the Earth's spin take awhile to propagate through the Earth's rocks. So, after that small slowing of the Earth's spin happens, there is a 5-6 year lag before they identify an increase of up to 30% in big earthquakes (over magnitude 7) between 10-30º latitude N and S. This increase could last up to 5 years, but the duration is unclear based on the current data. Why 2018? Apparently 2017 is the 6th year since that last deceleration event, so 2018 may see an increase in M7 earthquakes ... and that's the real issue. This is a theory that comes from looking at data since 1900, so although there have been multiple occurrences of this increase after changes in Earth's spin, 2018 would be the first time that we could predict that we should expect changes. If an increase happens, then Bilham and Bendick are likely onto something. If it doesn't this doesn't mean they are wrong, but rather that the situation might be more complicated then their models suggest. We've already seen two M7 earthquakes over the last few weeks: the M7.3 on the Iran/Iraq border on November 12 and the M7.0 in New Caledonia in the west Pacific on November 19. The former saw over 500 deaths, making it the deadliest of the year. The latter may have generated a tsunami in the Pacific Basin (I write this on the evening on the 19th). Now, M7 earthquakes can happen multiple times per year -- 2017 has already had 7 -- so, this may or may not be related to the phenomenon detailed by Bilham and Bendick. They tend to be randomly distributed across time, but geologists have noted clusters of large earthquakes occasionally, so they have possibly come across a mechanism to explain these "mega-earthquake clusters". The last year that the Earth's spin might have influenced earthquakes was 2010, which saw 23 M7+ earthquakes. However, the most important aspect might be that we could begin to prepare ourselves for years that could have more large earthquakes. Nothing in Bilham and Bendick's work tells us exactly when and where these earthquakes might happen. They just say that we might expect more earthquakes (so, no, not prediction). But even knowing that we could expect an increase means we can make sure people are prepared for a disaster with kits, evacuation plans and emergency management resources. It is a far cry from any real prediction of earthquakes (this is likely a fool's errand anyway), but if 2018 does see a real increase in M7+ earthquakes, then we may understanding more about how "big picture" processes like earthquakes and volcanoes* might be influenced by changes within the Earth. * One note of speculation: If earthquakes see an increase after these changes, one could speculate that volcanic eruptions might also feel this stress too. It will be interesting to see what happens with eruptions in 2018 as well.