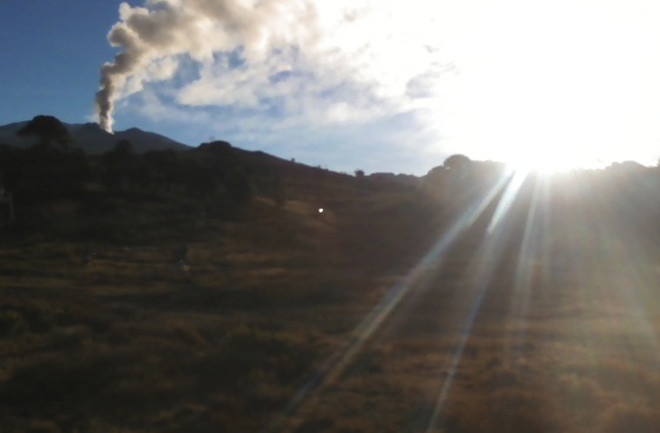 Webcam capture of the small plume at Copahue seen on May 24, 2013. Image: SERNAGEOMIN webcam via Volcano Discovery. It might be a holiday in many parts of the world, but Chile's Copahue isn't taking a day off. The Chilean Geological Survey (SERNAGEOMIN) and civil authority (ONEMI) have moved the volcano to red alert status, which means an eruption is imminent or in progress. So far, from the details I can find, it is the former -- an eruption is likely in the works in the hours to days timescale. The latest update from the SERNAGEOMIN says that over 250 small earthquakes related to magma movement are being recorded per hour at Copahue (although so far continuous volcanic tremor -- an almost sure sign of eruption -- has not been recorded). No plume has been spotted in the last day in satellite imagery and only a modest, ~400 meter steam-and-ash plume was seen from ground observations. However, the citizens of Caviahue in Argentina, just across the border from Copahue, have reported explosions and incandescence from the volcano.

Volcanic hazard map of Copahue from the SERNAGEOMIN. Red marks lava flow and lahar hazard zones, yellow marks lesser pyroclastic flow hazard zones. The stippled area is potential ash hazard. Image: SERNAGEOMIN. The sense from these updates and the change in status is that the SERNAGEOMIN expects an explosive event, similar to what we saw in December 2012 from Copahue, in the very near future. Schools in towns near the volcano have closed due to the threat of an eruption. You can check out a hazard map of the volcano below, where the largest threats being lahars and lava flows moving down drainages up to 15 km from the crater, while a lesser threat of pyroclastic flows also exists. There is also the danger of ash fall, likely to the east, if an explosive eruption occurs. The ONEMI has also raised the civil alert to Red, so preparations are underway for any potential evacuations for people within 25 km of the volcano (only ~2,240 on the Chilean side). It does seem that the SERNAGEOMIN webcam for Copahue is down again, so I don't know of any webcams pointed at the volcano -- but if you do, let us know in the comments.