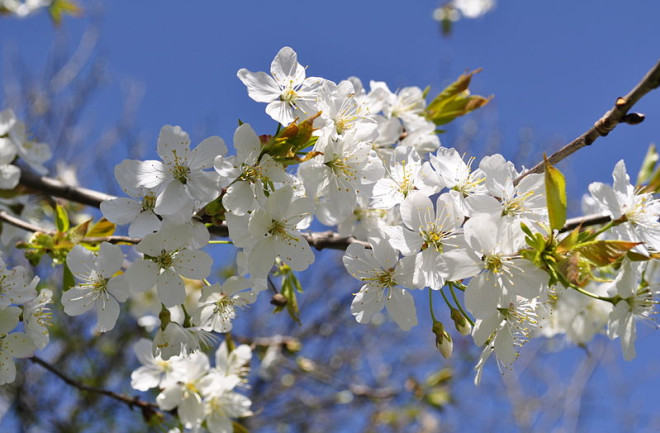 Spring is in the air! (Credit: Wikimedia Commons (CC BY-SA 3.0) The beauty of citizen science is the ability for non-professional researchers to get up close and personal with science. Think about all of your experiences collecting data from your backyard, analyzing images of spring online, and learning about new topics in science, have you heard from the scientists you’re helping? In our new series, “Conversations in CitSci”, we speak with the people behind the projects. By Sarah Dunifon “Plants have great stories to tell, if we take the time to listen to them,” says Kay Havens, consultant with Project BudBurst. “Project BudBurst (PBB) is a national campaign to track plant phenology which is the timing of natural events like budburst, first flower opening, full bloom, leaf color change and leaf drop,”. By knowing these phenophases (i.e. the timing of these events), we can better understand what effects climate change may be having on plants. With warmer springs, plants move through their leafing and blooming phases earlier. Contemporary data on bloom times can even be compared with historical records, before citizen scientists were helping in the efforts. “For instance, flowering times of many plant species in Concord near Boston, MA have advanced several days when compared to flowering dates recorded in Henry David Thoreau’s diaries (published by Miller-Rushing and Primack, 2008, in the journal Ecology),” says Kay. You can explore patterns and trends in Project BudBurst data for free online. “Scientists with the National Ecological Observatory Network are developing ways to visualize and analyze the data so it can be used in various education curricula,” Kay notes. What’s more, the data collected by citizen scientists has gone on to achieve some incredible things. In a study (published by Chung et al. 2011 in the journal PLoS ONE) on cherry blossom blooms, Project BudBurst data were included to help support the idea that cherry blossom trees in Washington DC will likely bloom in late February to early March after the year 2070, which is much earlier in the year than the current blooming schedule which averages early April. “Their historical average bloom time is the second week of April. As a result of this effort, we created a spring campaign focused on cherry trees – Cherry Blossom Blitz,”says Kay Project BudBurst encourages citizen scientists of all ages and backgrounds to get involved in the cause. By doing so, researchers are able to obtain a wide dataset on contemporary plan phenology, both in size and geographic scope. Kay currently acts as the botany consultant, but also played a role in developing the project. “I helped choose many of the species we target for monitoring, make sure the botanical content in our materials is accurate, and answer questions posed by our participants related to botany. I also promote the project to various audiences through talks across the country and tours at Chicago Botanic Garden.”. Since the project is national and largely exists on-line, Kay doesn’t meet many of the citizen scientists who support Project BudBurst, but does get to work with local school groups, scout groups, garden clubs, and other groups. “Most are really interested that their simple, but careful, observations can help scientists around the country understand how our flora is responding to climate change,” she says. She also has a message for the project’s current citizen scientists: “First, I would give a big thank you for donating your time and energy to our project! It may be hard to imagine that your single observation could contribute to a better understanding of plants and climate change…but it can!” For anyone interested in taking part, check out Project BudBurst for one-time or regular observation opportunities. By choosing a suggested plant species, or by nominating their own, participants simply login, record where their observations are taking place, and note what they see. Kay points out some of the fun aspects about participating in the project, noting “Project BudBurst is a great way to observe nature, spend time outdoors, contribute to a larger scientific effort, and learn something about the scientific process. We hope you will participate and, in doing so, gain a greater appreciation for plants and the natural world.”. Keep an eye out for a growing number of opportunities to engage in phenology and climate change research through citizen science. Even now, you can contribute with less than a minute of time from the comfort of your own armchair! Season Spotter, an online project, is asking volunteers to help classify digital images of fall in the southern hemisphere to capture the exact timing of its onset as part of its Fall Challenge. Along with Project BudBurst, these types of contributions go a long way to further advance the work of Kay and other researchers in the field. Have a question for Kay Havens? Comment below or let us know on Facebook and Twitter!