Astronomers measured red giant stars to figure out a new measure of how fast the universe is expanding. 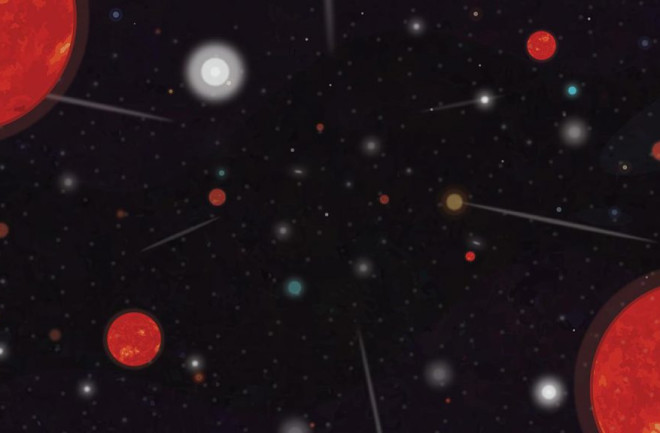 If you’re confused by modern cosmology, you’re not alone. Cosmologists themselves are confused, and two new results, using very different methods, add to their collective bewilderment. The results are measurements of how fast the universe is expanding, known as the Hubble constant. In recent years, astronomers keep finding strangely different answers to this basic question.

In much-anticipated research released Tuesday and set for publication in The Astrophysical Journal, one group, led by Wendy Freedman of the University of Chicago, found that our cosmos is expanding at a rate of 69.8 kilometers per second per megaparsec, where one megaparsec equals 3.26 million light-years.

But in another study published last week on the arXiv, an open-access website, an international consortium known as H0LICOW led by Kenneth Wong of the University of Tokyo and Sherry Suyu of the Max Planck Institute in Germany, measured the universe’s expansion rate at 73.3 kilometers per megaparsec.

The results are close, but they’re not the exact match that would make everyone happy. Both teams have essentially laid down new markers in a field that has been rife with controversy for decades. And they feed into a growing tension between groups that use different methods to measure cosmic expansion.

The stakes are high. Small changes to the Hubble constant affect science’s best estimate for the age of the universe by hundreds of millions of years. And if astronomers can nail down the Hubble constant to everyone’s satisfaction, they could help reveal the nature of the mysterious dark energy that is causing cosmic expansion to accelerate.

Astronomers used the Hubble Space Telescope to compare the brightness of distant red giant stars to the brightness of nearby ones. Because these ancient stars have the same brightnesses, scientists can use their light as a “standard candle” to find out how far away their host galaxy is from Earth. That result can then by compared to the galaxies apparent recession rate, offering up a measure of how fast our universe is expanding. The red giants, found in their galaxy’s halos, are shown here in yellow circles. (Credit: NASA, ESA, W. Freedman/University of Chicago, ESO, and the Digitized Sky Survey)

Freedman and her team used a new method for determining the Hubble constant. They used the Hubble Space Telescope and other instruments to measure the brightnesses of the brightest red giant stars in the outskirts of other galaxies. These ancient suns are relatively simple objects with a nearly uniform and well-known luminosity, so astronomers can convert precise brightness measurements into distances.

This method differs from previous efforts, including Freedman’s own Hubble Space Telescope Key Project of two decades ago. Instead of studying red giants, other teams have tracked our expanding universe using Cepheids, which are young stars that periodically vary in brightness. Recent measurements using Cepheids have found the Hubble constant to be around 73. And in April, the SH0ES team led by Nobel laureate Adam Riess of the Space Telescope Science Institute and Johns Hopkins University, measured a rate of 74.

Astronomers would have expected the red giant and Cepheid methods to give the same answer. But they’re off by just enough to be cosmologically significant. The reason for this discrepancy, says Riess, is that his group and Freedman’s group used different methods to account for the dimming effects of dust.

Riess says that if Freedman’s team had used the same method, their Hubble constant result would nearly match that of SH0ES. “This result actually gives me more confidence in our result,” he says.

In stark contrast, the H0LICOW team uses a totally independent strategy that relies on geometry rather than observing individual stars in other galaxies. H0LICOW monitors distant quasars — active supermassive black holes at the hearts of large galaxies — that have been gravitationally lensed by foreground galaxies. The space-time warping effect of these massive galaxies create lenses that split light, creating multiple images of the same quasar. As a result, the light from each image takes a different path to reach Earth. By watching the different quasar images flicker in brightness over months and years, the H0LICOW astronomers measured a Hubble constant of 73.3.

“Our results agree very well with that of SH0ES,” notes Suyu.

The fact that H0LICOW and SH0ES derive the same expansion rate (within their margins of error) despite using radically different methods gives a great deal of confidence that the Hubble constant is somewhere around 73 to 74. If the red giant method can somehow be brought into line with these other methods, astronomers will probably consider the Hubble constant to be a solved problem.

This map of the cosmic microwave background radiation shows temperature fluctuations that correspond to different densities across our universe. (Credit: SPTpol)

But there is yet another result that doesn’t quite fit into this rosy picture. Several years ago, an international team analyzing much different data from the European Space Agency’s Planck satellite came up with a Hubble constant of 67.4, with only a tiny margin of uncertainty.

With Planck, cosmologists made ultra-precise measurements of the speckled pattern of the cosmic microwave background, the leftover radiation from the Big Bang. The resulting map provides a trove of information about the dark matter, atomic matter, and dark energy that make up the universe. By measuring the ratios of these cosmic ingredients from Planck, cosmologists can predict what the Hubble constant should be.

But the H0LICOW and SH0ES results are higher than Planck’s prediction of 67.4, a mismatch that Riess says has only a 1-in-100,000 chance of arising from measurement errors. He thinks the discrepancy is probably due to some kind of unknown and perhaps very exciting new physics.

Freedman notes that her team’s result sits in-between the low and high end, but they’re still marginally closer to Planck’s. However, she is not discounting the possibility that slight measurement errors from one or more teams might be responsible for the different Hubble constants.

“I think these results show that if you only rely on one method, you may be missing something systematic that is difficult to uncover with one method alone,” she says. “That’s why you need independent methods.”

For her part, Suyu notes that the issue remains far from resolved: “The Hubble constant challenge continues as each probe/team tries to reduce their measurement’s uncertainties and control their systematic errors. Independent and new probes of the Hubble constant would also be very valuable.”